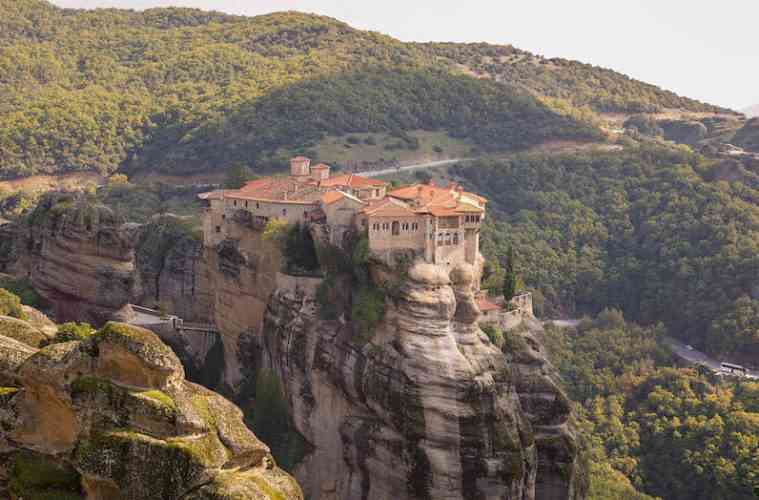 One favor to ask before I start this post: I am participating in the Kerala Blog Express competition to visit Kerala, India, and the more votes I have, the more it helps.  If you’d like to help me out (now that the holiday spirit is with us, and all that), please vote for me here: Kerala Blog Express – Go Road Trippin’.  Now on to the story!

Meteora is located in central Greece, hidden in the rural mountainous area most tourists skip in favor of sunny Aegean islands and Athenian ruins.  Even after all the years I’ve spent traveling back and forth to Greece, I had never been there myself.  And I’m extremely glad that changed a few weeks ago.

I had heard that Meteora is a deeply spiritual place, with monasteries built high into towering cliffsides, and low-hanging mists frequently cloaking the rocks; but I didn’t know much more than that.

I got into Meteora at 8 PM after a long road trip from Athens, way after the sun had set – it added to my excitement because I really wasn’t able to see the monasteries above the town I was staying in (Kalambaka) until dawn.  The next morning, I was fortunate enough to be led on a 6 mile hike through this unique cultural site by local tour guide/rock climber/hiker Lazaros Botelis, courtesy of Visit Meteora.  The hiking trail was manageable for me, and probably quite easy for people who frequently drop phrases like “CrossFit” and “cardio” in their conversations.

We started at the base of the cliffs just as the morning sun was getting high enough to hit the valley floor.  The shafts of light streaming down made the whole landscape look like a still life, rather than a real-world place. 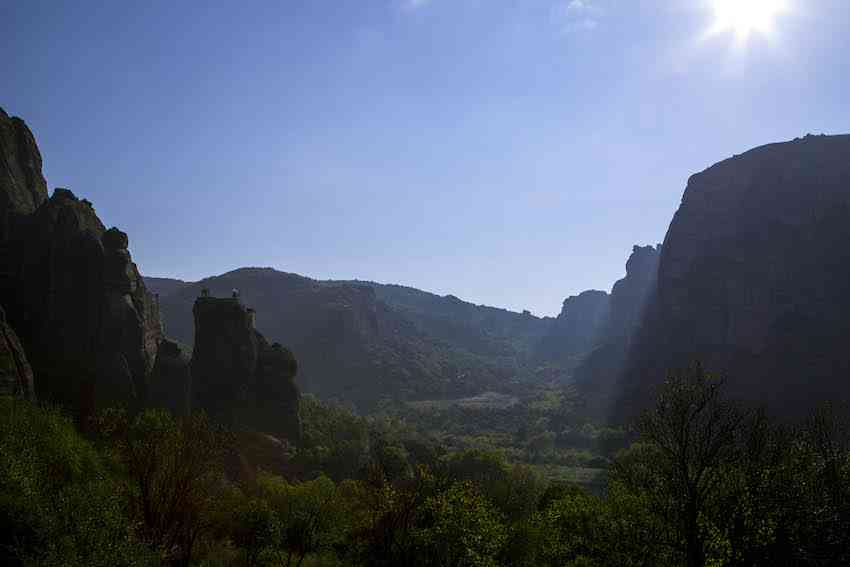 Our guide Lazaros, who was obviously a “morning person”, easily sprinted ahead showing us the trail while I was still trying to get my eyes fully open.  That’s when we caught out first close up glimpse of the strangely grooved rocks the monasteries were built on. 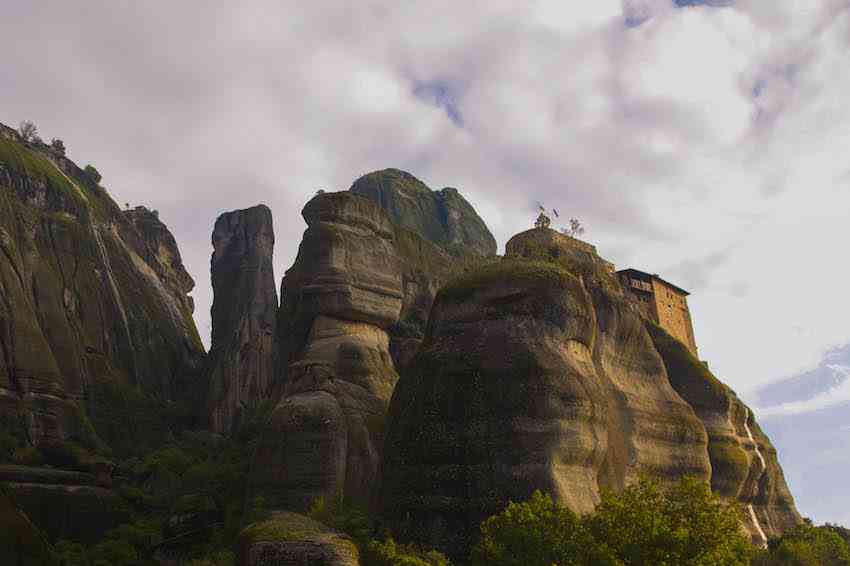 According to Lazaros, recent findings showed that the whole area of Meteora used to be underwater.  The water currents are assumed to be what caused the strange lines on the towering cliffs.

Heading further into the forest, we came upon a monastery inserted so far into a rockface, it looked like it had been jammed in. 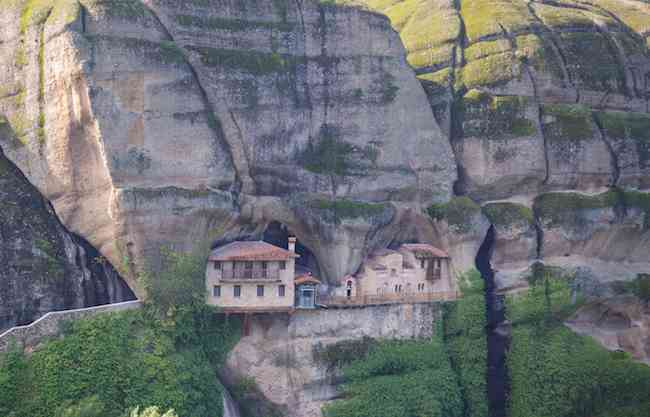 The small blue rectangle in the center is an elevator to get the monks up and down from the seemingly inaccessible building.  Of course, the elevators were installed relatively recently; before that, the monks put themselves in what basically looked like huge handbaskets and pulled on a rope to hoist themselves up.   The idea was to be as isolated as possible to focus on religious duties.  Which I would assume living in a rock wall accomplishes quite well.

As we continued down the trail, the next turn took us away from the cliffs and deeper into the forest, which was beautiful in its own right. 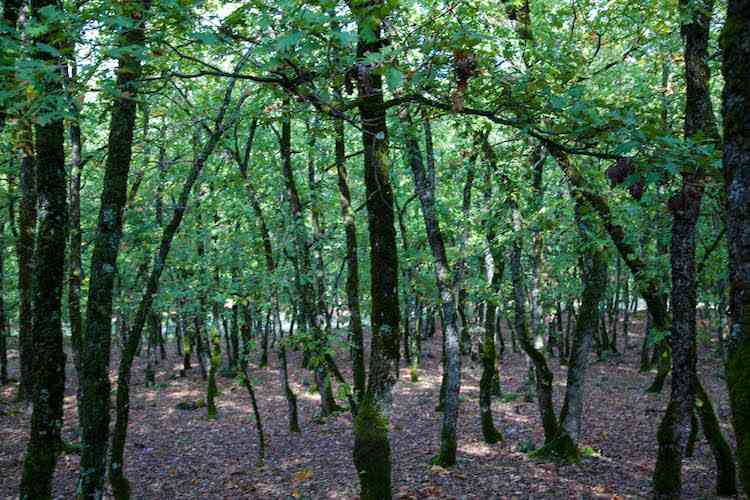 Lazaros proved really knowledgeable about the forest, as he happily explained in great detail exactly how many species of mushrooms we were passing that could kill us.  In just a few minutes.  Did I mention we were also looking for mushrooms during our hike to cook for dinner?  And trying not to get the different species confused? 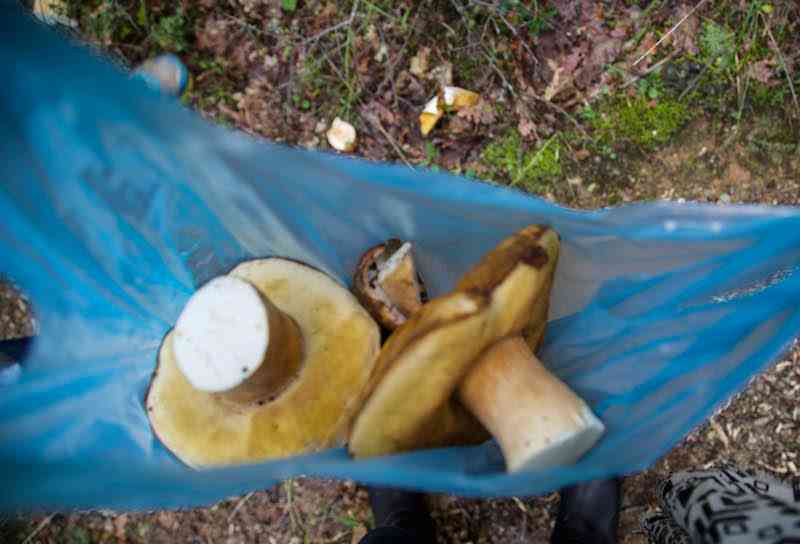 The non-killing mushrooms. I think. (I am in no way liable for any readers of this article picking the wrong fungus and dying of mushroom poisoning)

As we stopped to pick up one last batch of mushrooms we found, we heard clanging bells and looked up to see a herd of about 200 goats crossing the trail in front of us.  Oh, the traffic jams of the Greek countryside.  It was such a representative moment of walking through the forest in Greece; clanging bells and the distant baaing of goats, the smell of pinecones and the feeling of a pebbled dirt trail underneath my feet, topped off by a slight moisture hanging in the air from the rains the night before.  They were the smells and sights I had experienced so many times before in my childhood, when I would venture into the forest right behind my house outside Athens.

I came out of my nostalgic daydreaming and saw the final goat leave the trail (after leaving us a little gift). We walked on, and the incline kept getting steeper, until we reached what looked like a peak.  After one last turn, we were out of the forest, and the view I saw below me was incredible. 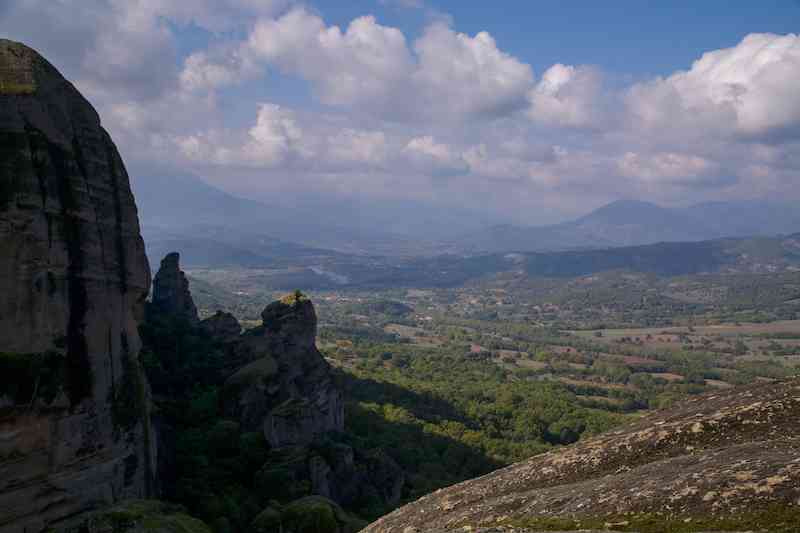 The town of Kalambaka was laid out before us, with giant cliffs towering over the houses through the haze.  On the edge of the hill we were standing on, the statue of a proud monk stood with a plaque before him, and a cross stuck into the ground further back. 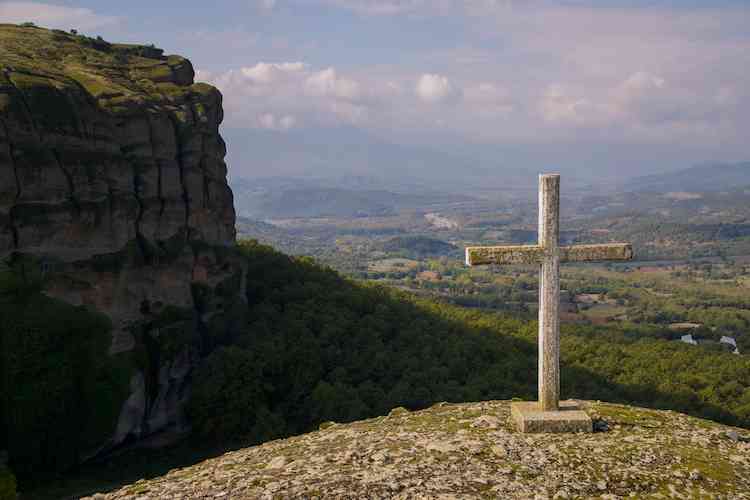 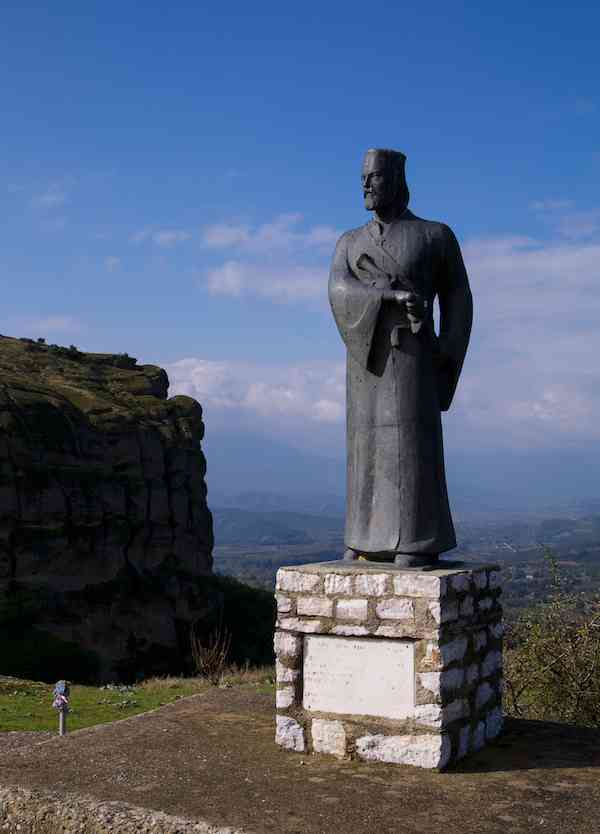 The monk memorialized by the statue is Papathymios Vlahavas, a key figure in the Greek revolution against the Ottoman Empire.  He was described to us by our guide as a “warrior monk”, which sounds like something you level up to in World of Warcraft, but was actually a real thing in Meteora around the time of the Greek War of Independence.  Apparently a lot of the monks from Meteora played an important part in rallying the local Greeks against the Ottomans.

After resting, admiring the view, and catching our breath, I continued on hoping to get my first glimpse of the monasteries from up high.  We rounded one last bend around the hill, got hit by the warm autumn sunlight, and were rewarded for our miles of hiking with this: 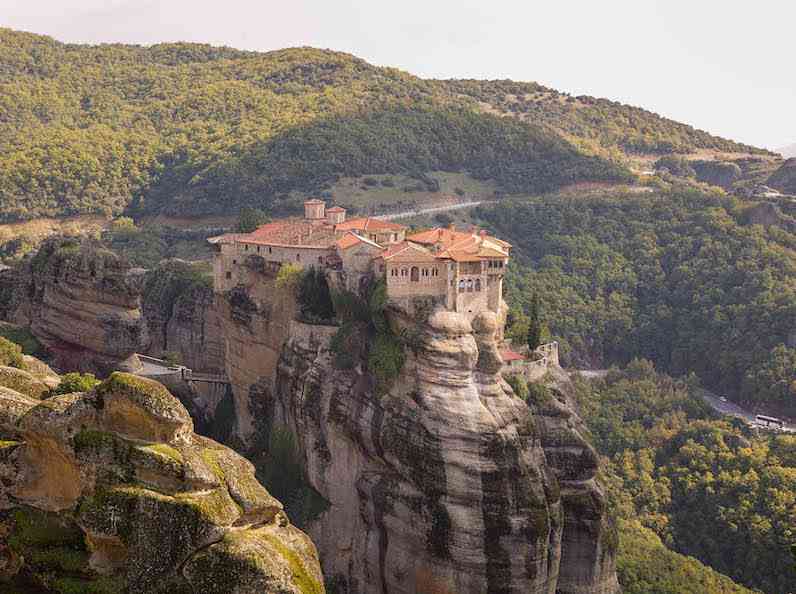 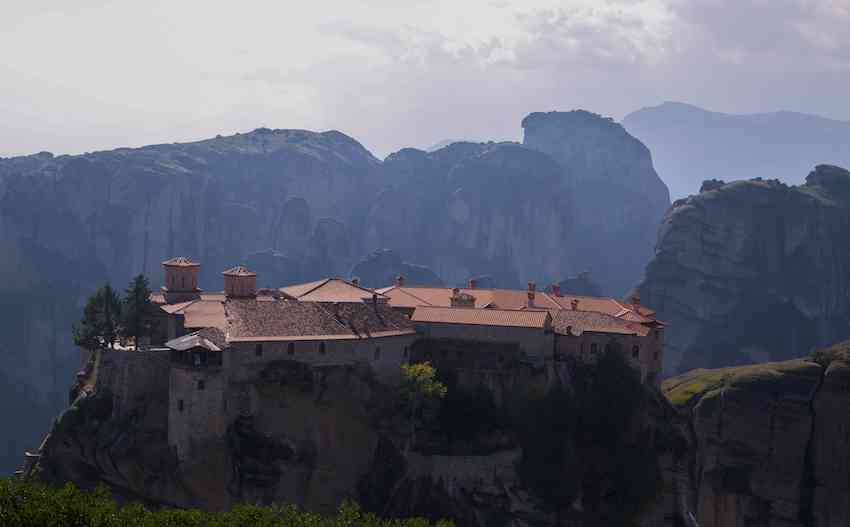 The monasteries looked almost like an extension of the cliff face, as though they spontaneously sprouted out of the top of the rocks to provide an isolated, secure, and silent place for the monks’ religious contemplation.  It was a truly surreal view.

Our trail eventually met up with the asphalt of the road leading up to the monasteries – you can, in fact, get there by car if a 6 mile hike isn’t your thing – and we walked down to the Great Meteoron Monastery, the main monastery open to visitors.  As I rested for a while near the entrance, I noticed the crowd seemed to be a mix of well-dressed Russian visitors (presumably due to Meteora’s importance for the Eastern Orthodox religion), hikers, and Greek priests.  I then saw a Greek priest with his flowing black robes and foot-long beard take a selfie in front of the monastery, came to the realization that it’s really not just my generation, and decided maybe it was time to leave the crowd and go inside. 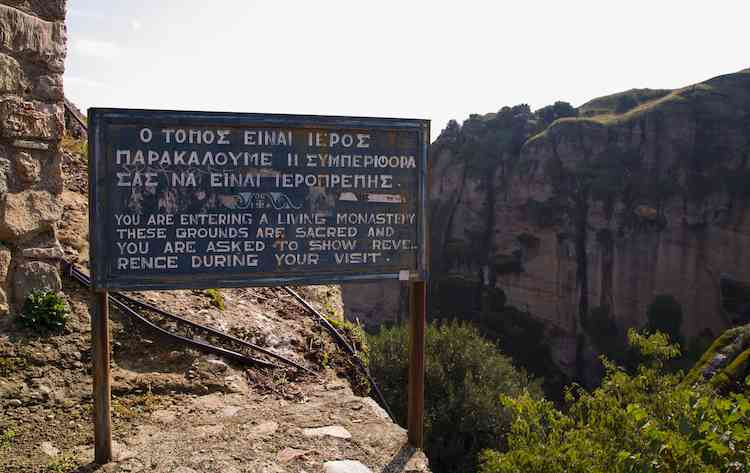 The monastery demands a certain respectful code of conduct, and both men and women are expected to be appropriately covered and dressed.  Wrap around skirts are provided for women who enter with pants, as is common in many religious sites. (But which, to veer off topic for a second, I never understood as a concept.  Don’t pants actually provide more coverage than a skirt?  Anyway, if you know more about religious rules than I do – which is almost a certainty – please explain in the comments.)  Entrance is free for Greeks, and 3 Euros for tourists.

The first part of the monastery has a really intriguing little museum space, explaining the history of the area, showcasing artwork featured in the monasteries over the years, and containing an impressive display of uniforms, newspaper articles, and other artifacts from the Greek War of Independence.

The courtyard of the Great Meteoron Monastery also had some impressive murals and structures to check out.  Since I grew up attending the Greek Orthodox church (about twice a year, but still), I’m quite used to the painting style found in most such churches.  However, I still find the 2-D figures with hands raised, cocked heads, and jewel tone shrouds uniquely beautiful. 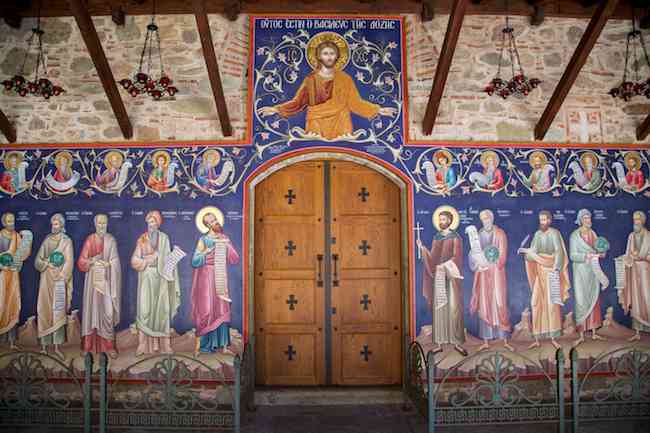 Further into the Grand Meteoron Monastery, I stumbled across a room containing letters from the 15th century onwards, written by monks who lived and died within the monastery walls.  I would definitely recommend spending a good chunk of time in this room to any potential visitors, as I would also recommend searching every corner of the courtyard for interesting views of the surrounding landscape. 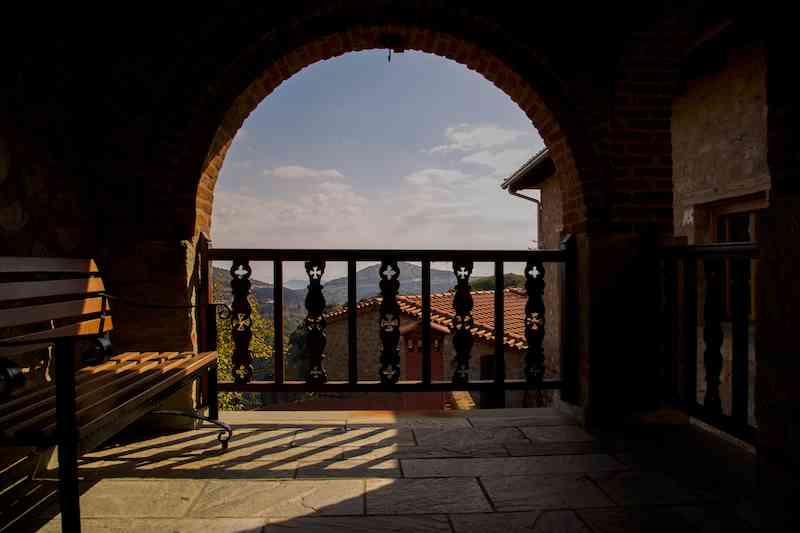 After taking in as much as I could, I walked out onto a protected ledge outside the monastery, and looked down at the town of Kalambaka. 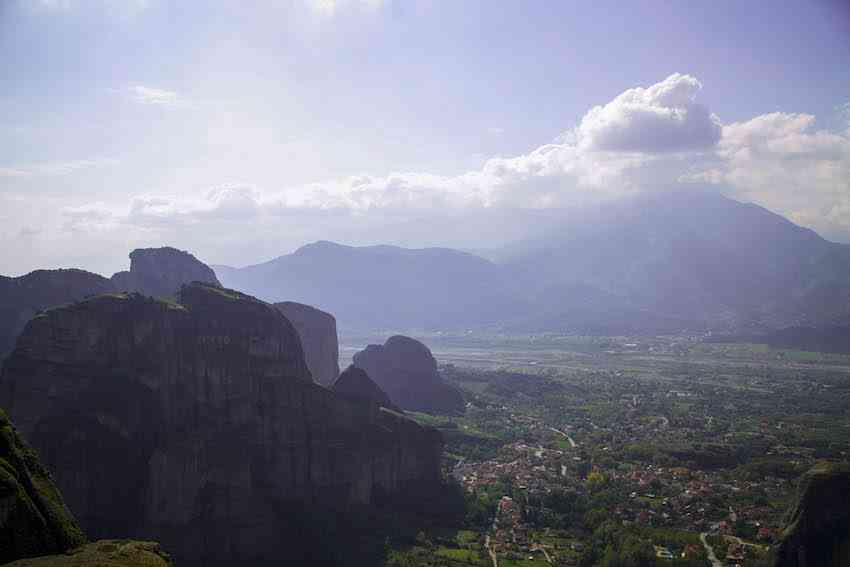 The houses appeared relatively tiny, completely dwarfed by the towering cliffs piercing the atmosphere above them.  Since it was late October, and still early in the morning, the haze and clouds at the very top of the peaks were unwilling to disappear entirely, giving the whole landscape a mysterious, almost alien vibe.  I breathed in the crisp, mountain air, gazed out into the glowing valley, and decided that moment was the best possible end to my first exciting little adventure in Meteora.

Thanks to Visit Meteora for inviting me on this press trip, and a special thanks to George Kourelis for coordinating my visit, and Lazaros Botelis for being our tour guide (and recommending the best souvlaki place in Kalambaka).  Even though this was a press trip, all opinions and impressions are my own – I was not paid for this post, and I only endorse destinations I truly enjoy.

What’s one of the most magical places you’ve ever visited?