There’s no better way to explore Athens than through the ideas that inspired the foundations of the city, and, of course, its many delicious Mediterranean tastes.

People tend to associate ancient Greece with philosophy, and modern Greece with the healthy, fresh aromas of its tasty cuisine, as well as that most ubiquitous of cooking complements: olive oil. 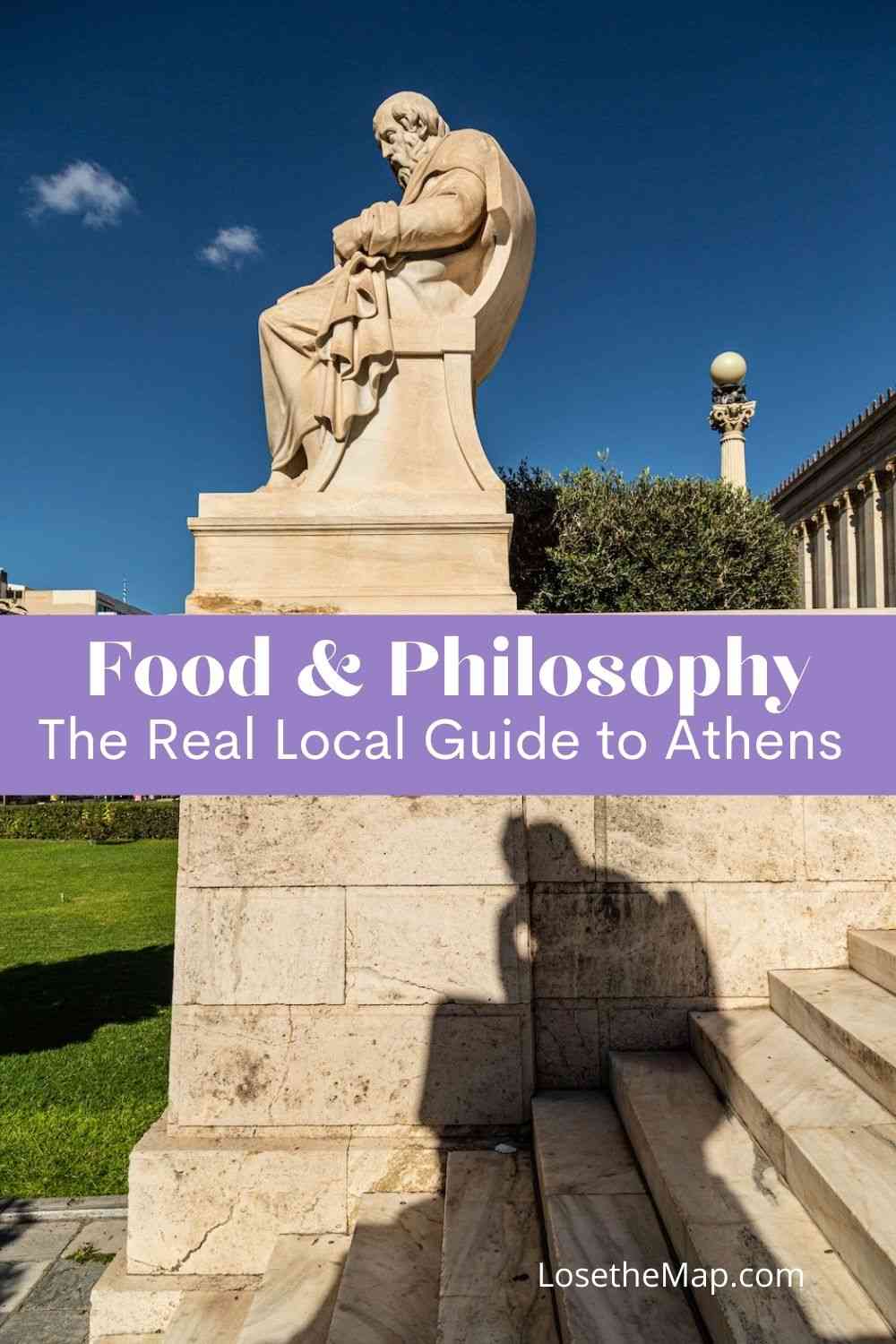 Which meant if I was going to explore my beloved metropolis from a local perspective, I needed experts in both these fields. So thanks to Discover Greece, I partnered up with Alternative Athens and Be a Greek to get a different view of Athens from two of the people who know it best. Thanks to the Electra Metropolis Hotel as well for hosting my stay.

Because of what I imagine to be popular demand, I will start with the food first. 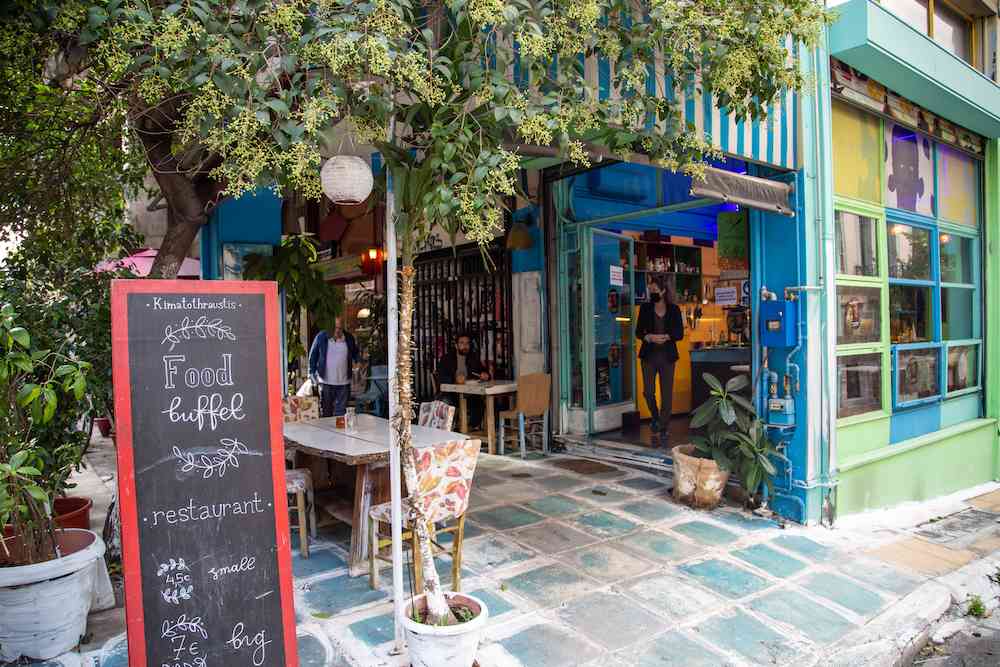 Anyone who grew up in a Greek household is acutely aware of the importance of olive oil. It’s cooked with, used as dressing, mixed with lemon juice to be poured over fish, and is generally every Greek mother’s number one ally in the kitchen.

As Mediterranean cuisine has become increasingly popular for both its taste and its health benefits, olive oil has skyrocketed in popularity around the world. However, many people may not know just how healthy pure, well-made olive oil can be.

On my tour with Alternative Athens we stopped by Malotira, a boutique olive oil shop in the center of Plaka, one of my favorite (and most tourist-friendly) Athenian neighborhoods. This particular store is run by very hands-on owners who only sell products from small, Greek farmers they know and have quality checked. 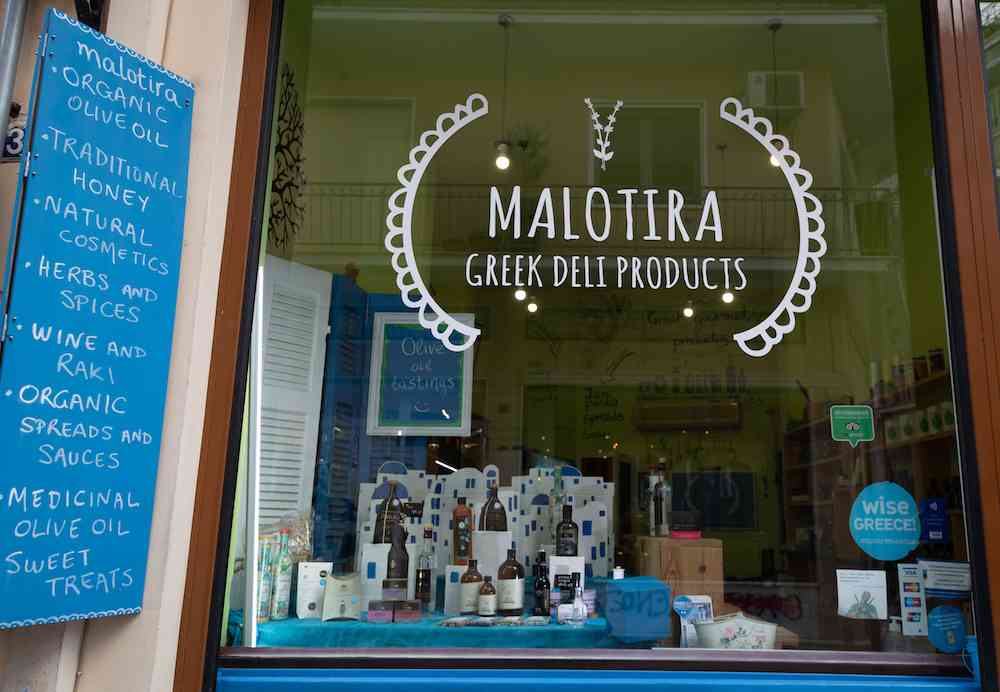 After a quick shot of 76 proof tsipouro to clear the palate (for those who don’t know, tsipouro is a strong Greek alcohol. Yes it was 10 AM, and I will not be judged), we started taste testing the olive oils along with some classic charcuterie bites.

Fun (Nerdy) Fact: Though charcuterie may be something your wine snob friends insist on ordering at every restaurant now, the cheeses and cured meats in it were actually once known as Cucina Povera, aka Kitchen of the Poor. Those cured foods and cheeses lasted longer than many other foods, especially for people without good access to fridges or ice, so poor people favored stocking them up. So next time you’re out, tell your bougie friends they’re ordering from the kitchen of the poor. 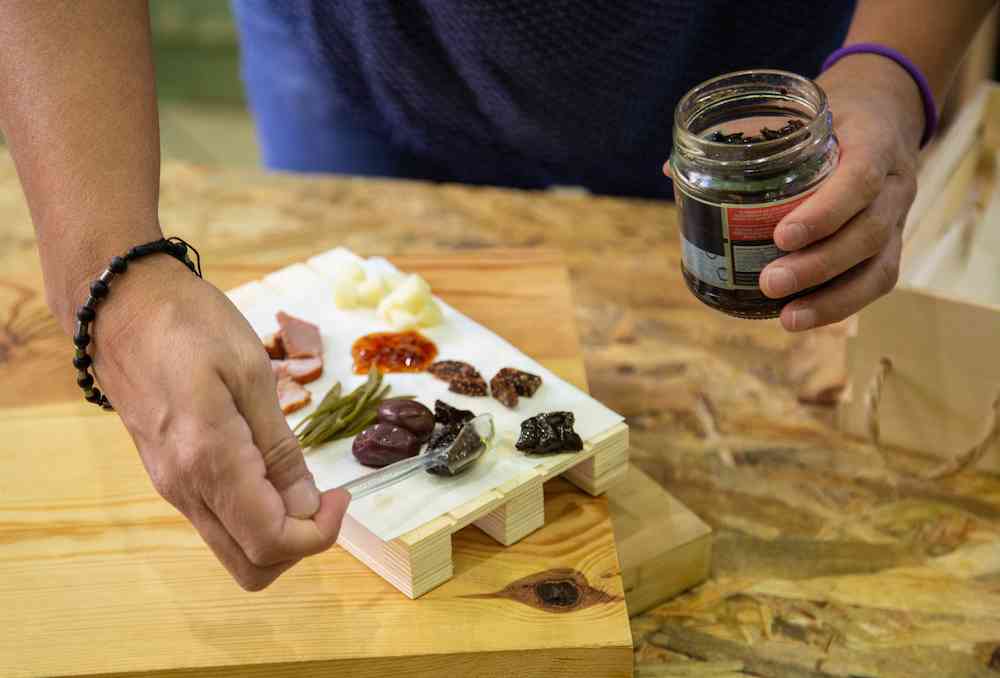 I learned it takes about eight kilos of olives to make one kilo of olive oil; I also learned that Greece is first in the production AND consumption of extra virgin olive oil.

Though olive oil is considered one of the healthiest oils to use, there are guidelines for choosing the ones that provide the best health benefits: choose EVOO (extra virgin olive oil), cold pressed, AND in a dark container. Why? Because olive oil is photosensitive, and dark containers don’t let the light pass through and ruin all those antioxidants. 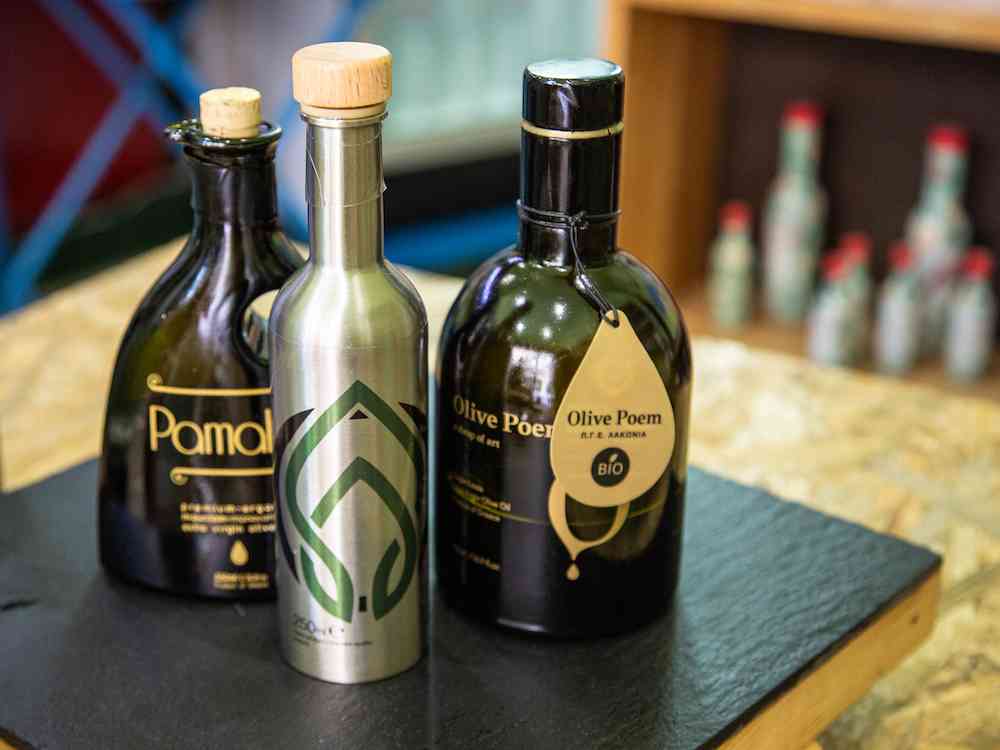 Varvakeios – or Athens Central Market for tourists avoiding the minefield of Greek pronunciation – is one of the best known food markets in Athens. Unlike many other markets throughout the world that have pivoted to catering to tourists, Varvekeios is still a mostly local-frequented food market for Athenians to buy great quality, fresh ingredients on a budget. 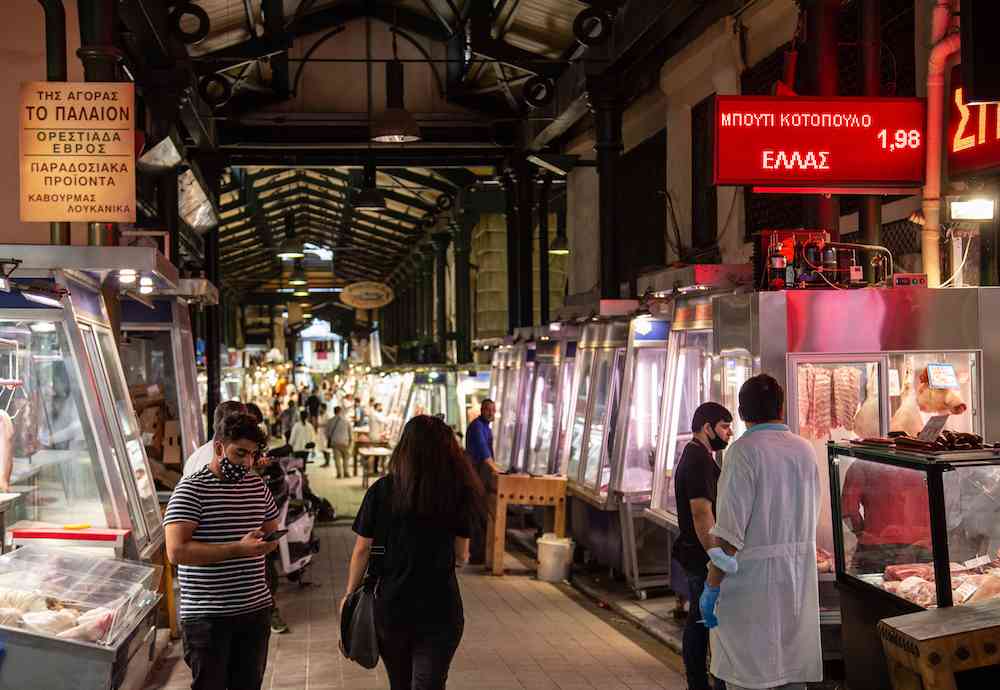 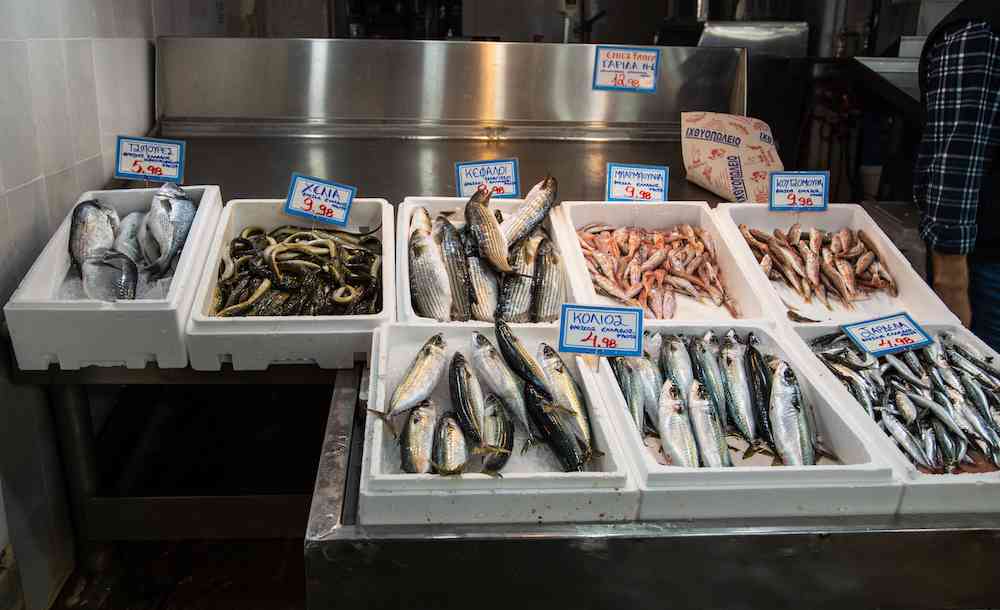 As in most markets and bazaars of the world, the vendors are loud, direct, and will do their best to lead you to their stall. So if you’re just passing by, the trick is to keep walking fast, but not fast enough to slip on the hosed-down floors.

Varvakeios market, built between 1876 and 1886, houses over 70 different shops under its roof. Fresh meat, olives, cheese, fresh fish and seafood – you will find almost any Greek staple at Varvakeios. If you want to stop on by, go any morning Monday through Saturday. The earlier you go, the more likely you are to find the stalls full and the food at its freshest.

Right outside you will find another market selling fresh food and vegetables. 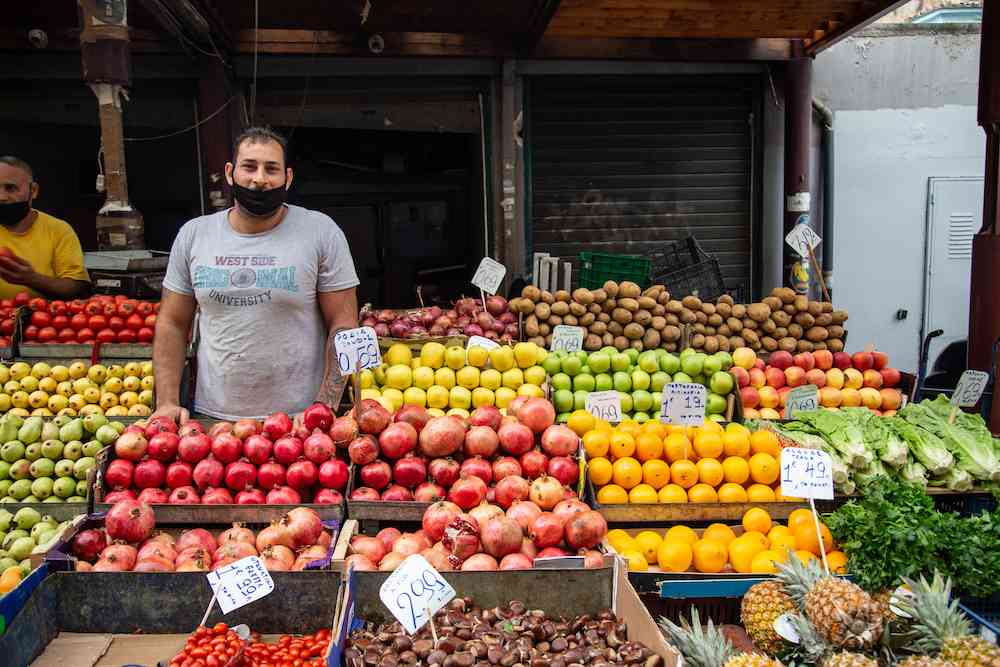 Now moving right on over to some of the unhealthier (but tasty as hell) foods you can find in Greece: one of the oldest and most well-known cured meat shops in Athens: Miran.

Originally a term used to describe the small dishes served along with ouzo, another famous Greek liquor, “mezedes” is used casually by Greek to refer to most small bites.

One of the favorite dishes to accompany hard liquor are cheeses and cold cuts, including pastourma – a seasoned, air dried cold beef. And one of the best places for pastourma in Athens is Miran, founded in 1922. 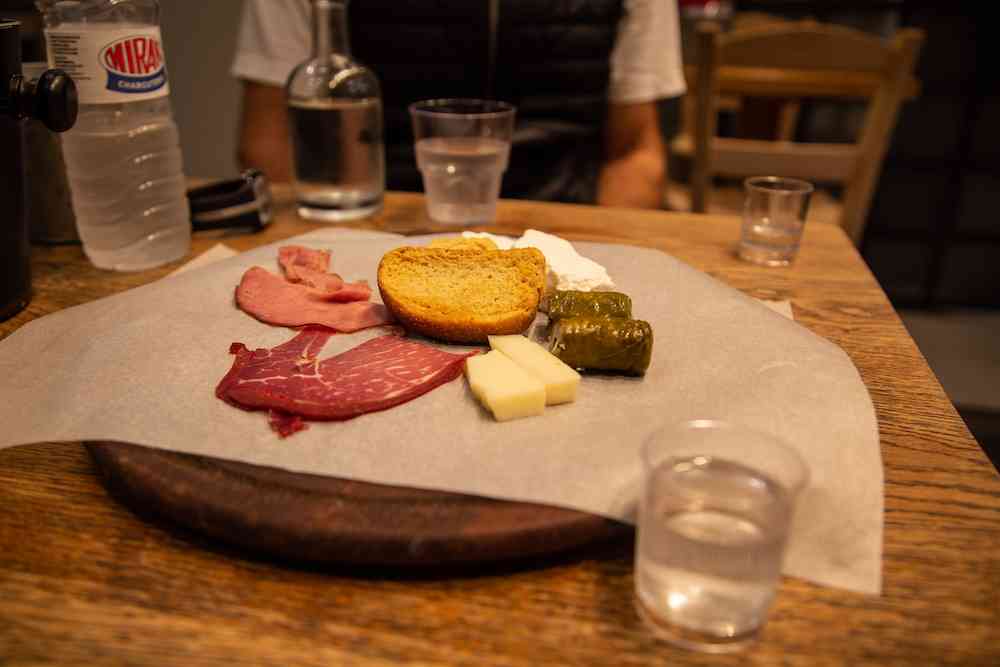 Miran cured meats – with tsipouro on the side again

Located in the working-class streets of central Athens, Miran is a must-visit for any meat-eating foodie visiting Athens. In true Greek fashion, the owners and employees greet you warmly and make you feel right at home from the second you walk inside.

Many traditional casual restaurants in the area also feature old-school Greek cuisine, including a lot of the bread dips, beans and cooked vegetables popular in my grandparents’ generation. 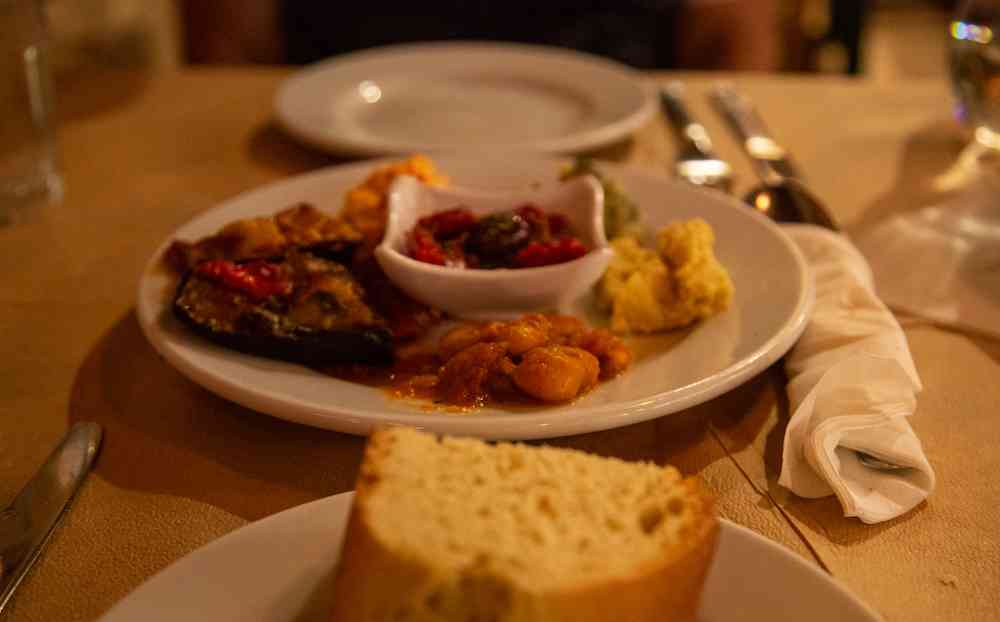 Up until the last 50 years or so Greece was a predominantly poor and rural country. Unless you lived in the mountains and had to rely on hunting game, meat was a rarer, more expensive item for most households. Though gyro may be the most popular Greek fast food dish known to the outside world, I think every tourist looking to discover a more authentic side of Greek cuisine should look to these older, perhaps simpler, but healthier staple foods.

Of course, to discover an even older part of Greece, we have to go back a loooong way. That’s right – back to toga land; ancient Athens.

The Philosophy of Athens

You’ve probably heard of the big ones; Socrates, Plato, Aristotle. Though most of us known these names, for many people they are little more than words your history teacher made us memorize for a multiple choice quiz.

However, their modes of thinking affected not only the events of their times, but in fact, the entire basis of many movements and governments going forward. It was Aristotle who first said that “man is a political animal”, and emphasized the importance of education in making people the best they can be, as well as civic engagement as an duty. Most of our social sciences today stem directly from Aristotle’s ideas. 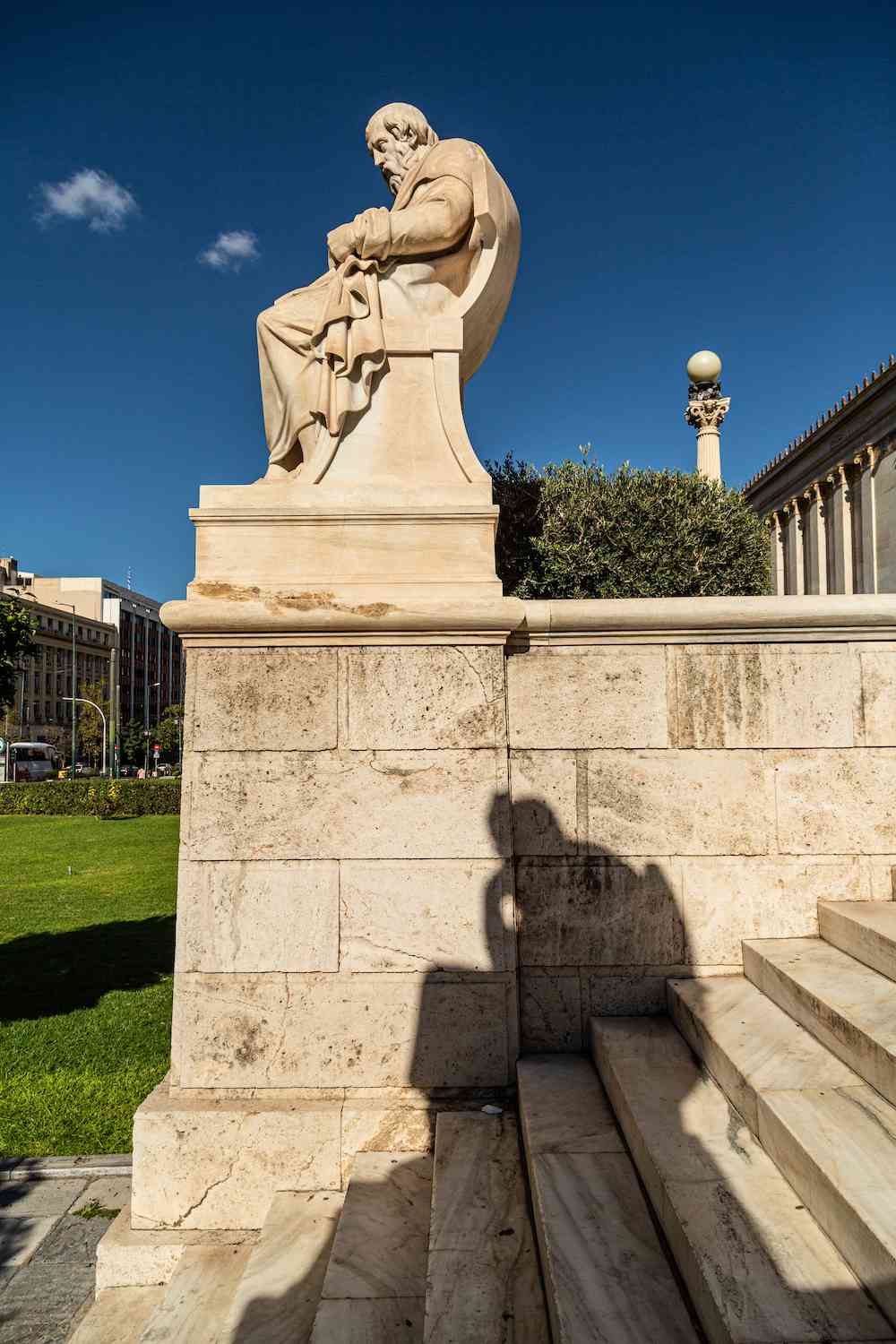 I purposely don’t want to go too much into detail about a lot of the incredibly surprising information I learned thank to my Be a Greek tour guide (who was WONDERFUL). I think it’s important people take the tour – or look certain people up – themselves.

But suffice it to say, I realized there was a lot more nuance and depth to not only the philosophies I thought I knew, but the men themselves.

Did you know Epicurus was the first to take women, slaves, and prostitutes as students – which played a big part in why he and his philosophy were ridiculed? Did you know Socrates was the original “why is he with her” guy? No, really. He was rumored to be married to the ugliest, most irritating woman in Athens, and he often said that a big reason he could deal with almost anything in life is because he could deal with her (ouch). 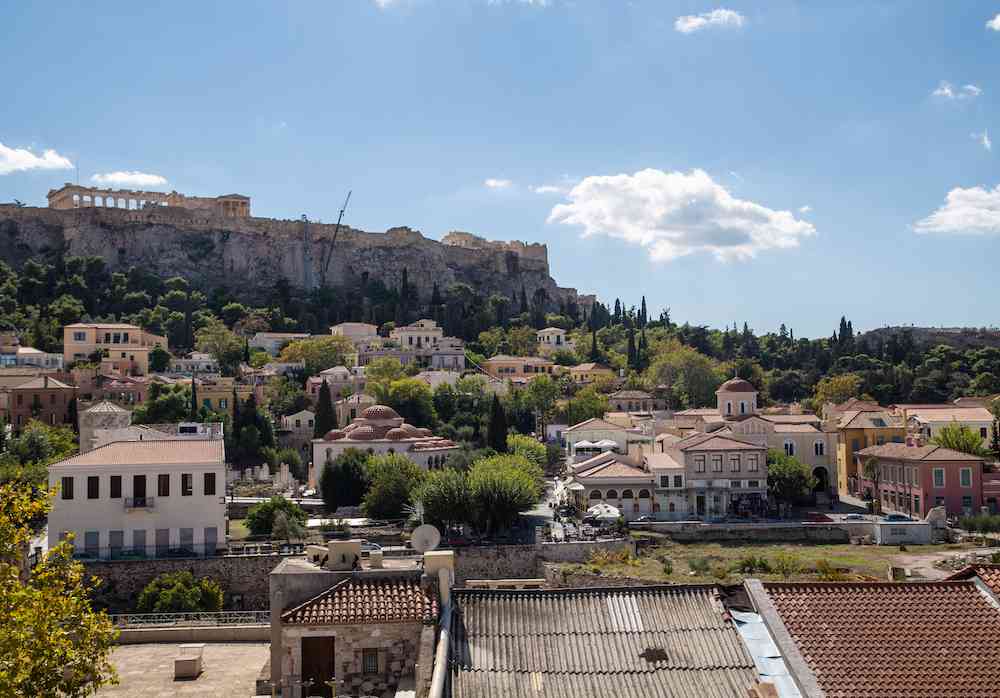 A view of the Acropolis overlooking the philosophers’ beloved Athens

One thing almost all the philosophers had in common though, is their extreme, one might say excessive, pride in Athens. Perhaps giving us an idea of what kind of beacon of light Athens was considered at the time, exile from the city was said to be a punishment almost as bad as death. In the minds of most Athenians – and most certainly these philosophers – everything outside of Athens was an intellectual wasteland.

Streets and buildings in Athens still bear these mens’ names. You can see their statues pop up, as well as statues of more recent Greek heroes, at the Athens Trilogy. 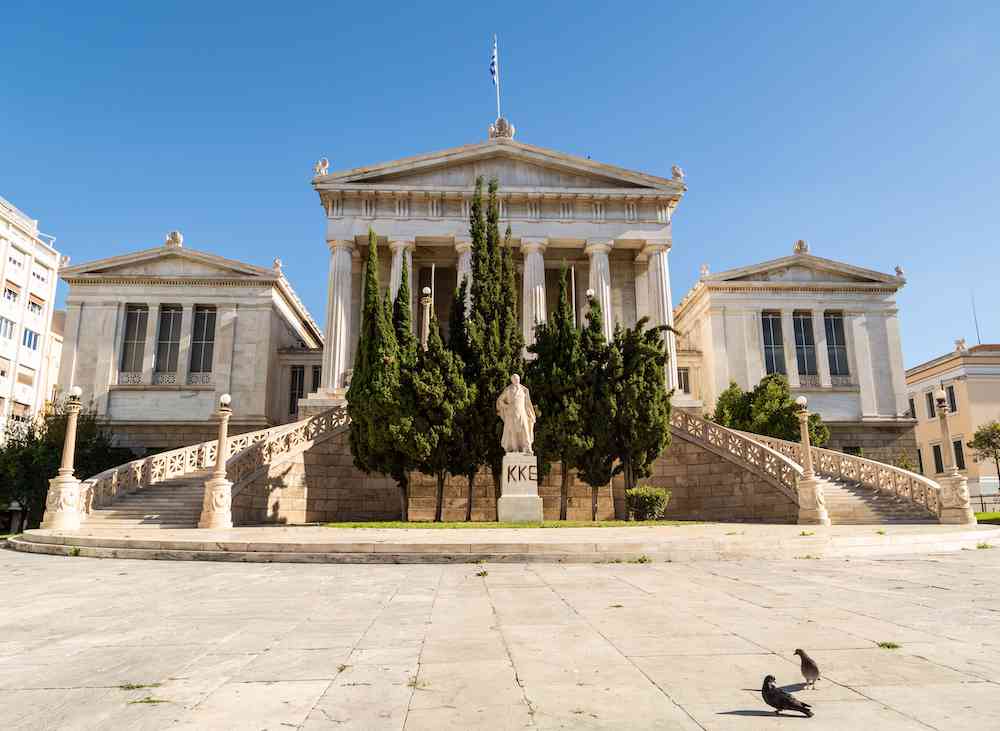 First there is the National Library of Greece. Traditionally, every publishing house had to bring a copy of every new book here. Though the library has now been moved to the ultra modern Stavros Niarchos Foundations, the newspaper archive remains in this beautiful neoclassical building.

Next is the National University of Athens, though this specific building is now used only for graduation ceremonies. The number of students has increased from the couple of dozen initial ones in the early 1800s to many thousands now, so holding class here would be a bit impractical. 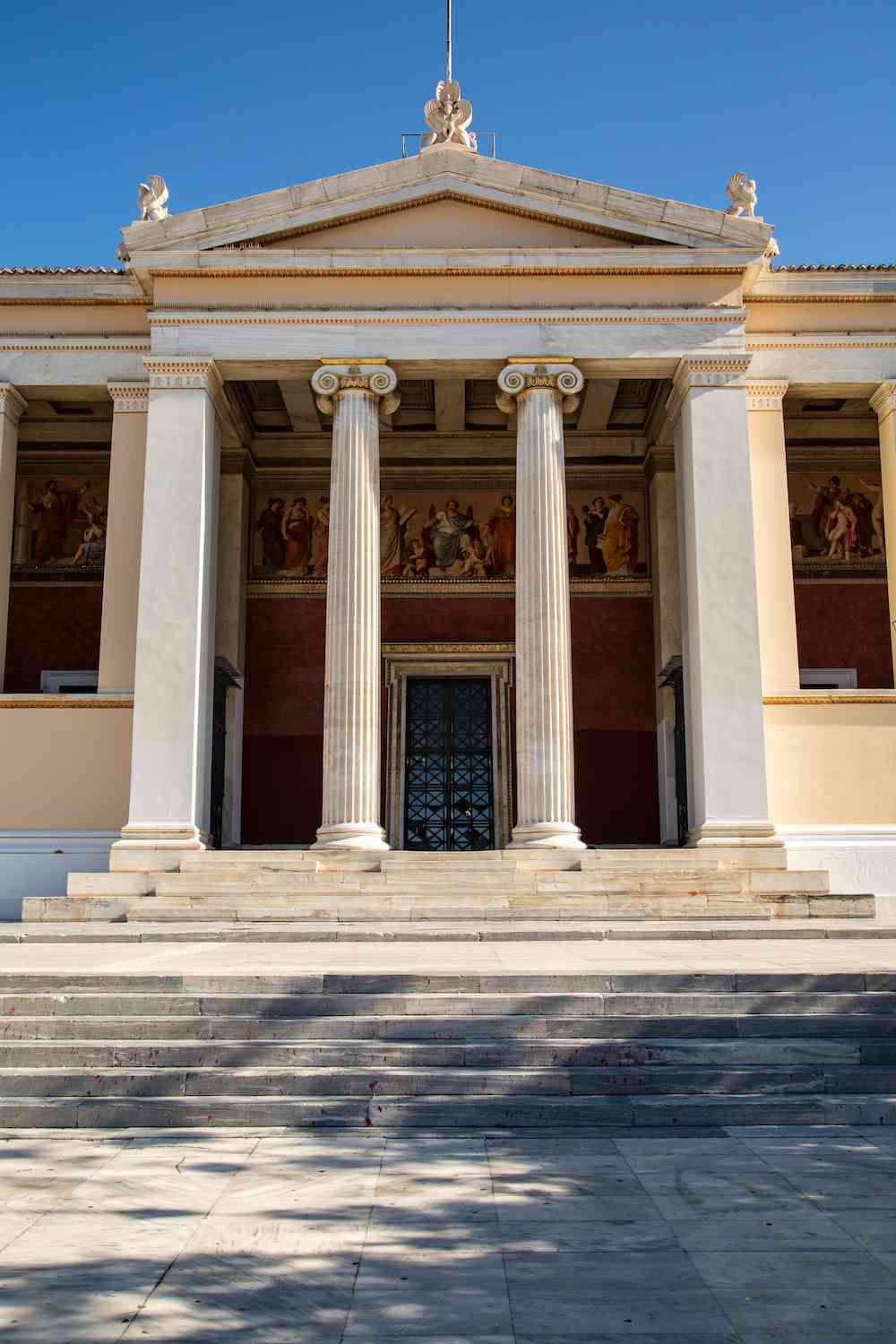 In fact, this was the original first university of Athens below, used in the early 1800s – the building would barely fit a single kindergarten classroom now. But at this time, much of Greece was completely illiterate. 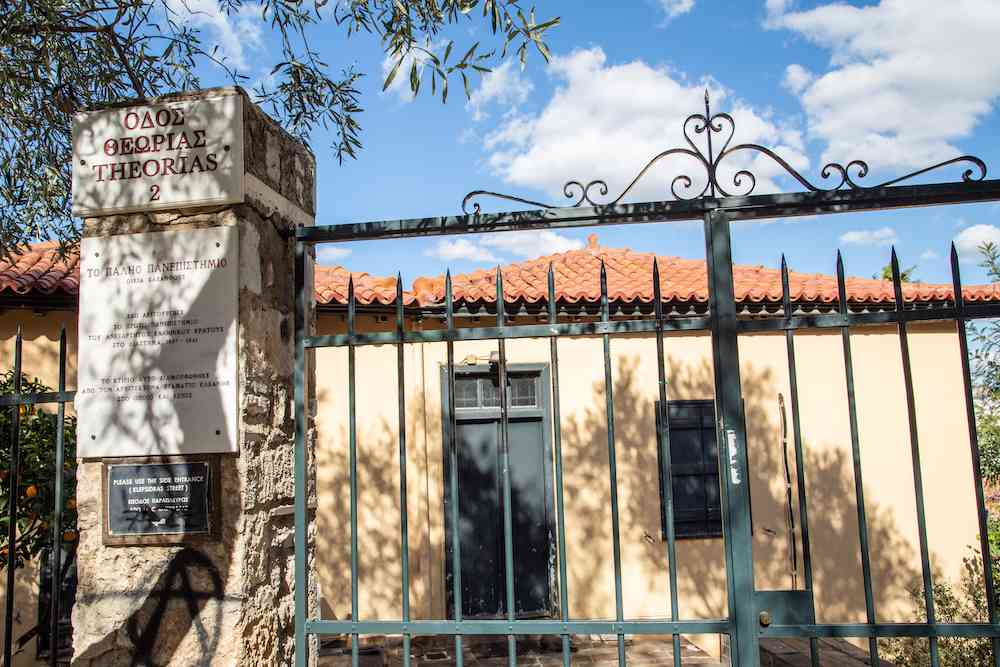 Last is the Academy of Athens, responsible for much of the groundbreaking research done in the city. It is the highest research establishment in all of Greece. To the left and right of the main stairs are statues of Socrates and Plato, while up on the columns you can see Athena and Apollo, two of the original twelve Greek gods. 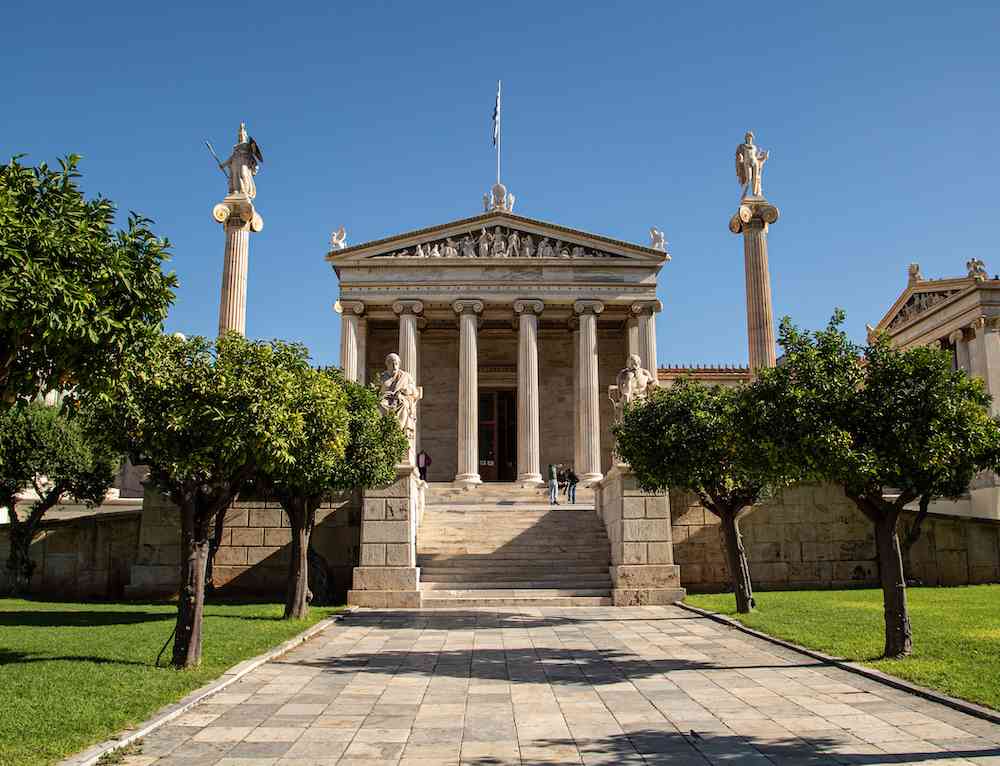 These buildings are all built in a neoclassical style. This was favored in the 1800s after the Greek War of Independence, as Greece’s King Otto wanted to remind the rest of Europe that the newly liberated country bore the heritage of ancient Greece, which had provided an incredible foundation for the rest of the continent. He hoped this appeal to Europe’s philhellenic (Greek-friendly) tendencies would garner even more support for the fledgling government.

In fact, the strategy of appealing to a general international love for Greece has been commonly used by the country up until today.

The Greek Exports of Yesterday and Today

There is a reason I combined the food and philosophy of Athens in one visit, and one post. For such a small country, Greece has enjoyed (and again enjoys) popularity throughout the world for many of its exports, whether its products, natural beauty, or ideas. 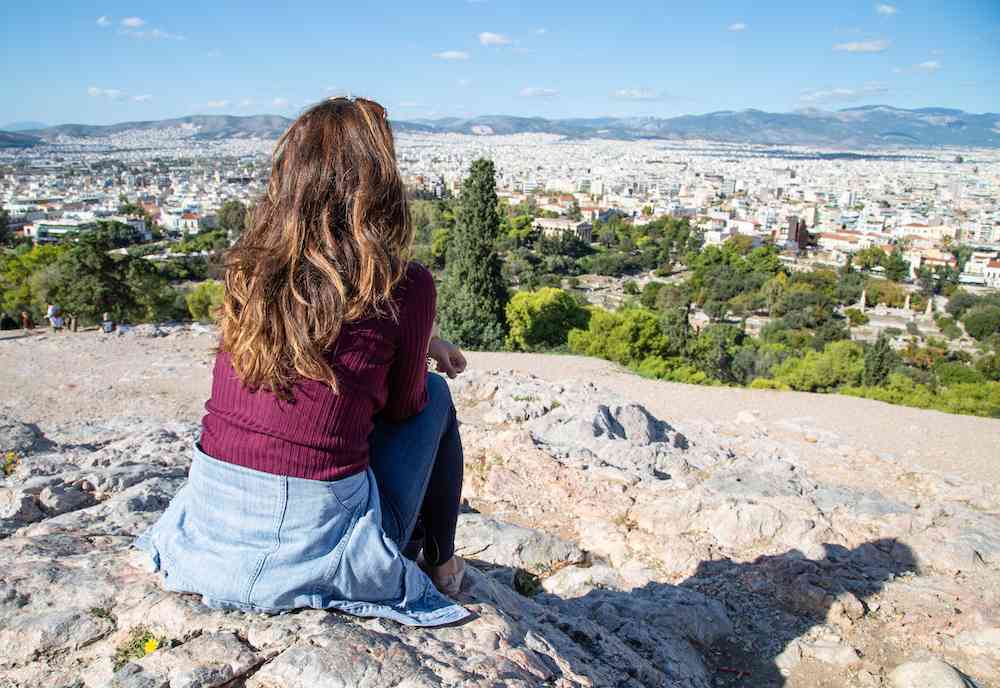 The current population of Greece is just under 11 million people. Yet almost everywhere I go in the world, whenever I mention I am from Greece I always see fascinated reactions. People itching to go to the beautiful beaches they’ve seen; people raving about their love of Greek food; people mesmerized by ancient Greece and its extensive mythology.

It gives me a special pride in my country, but it also makes me marvel at the outsize influence Greece has had on people throughout the world. Most of all, it makes me love my homeland even more.

If you’re ever in Athens, I highly recommend Alternative Athens and Be a Greek for really knowledgeable, insider looks at the city. You will get to learn so much more in so little time, and truly gain a lot of context for everything you’re observing and experiencing. Thanks to the Electra Metropolis Hotel as well for hosting my stay!