Life in a Sami Village: Herding Reindeer in Norway

Since Christmas just passed, I thought it would be seasonally appropriate to write a post on one of the most surreal experiences I had in Norway – visiting Sami reindeer herders in their traditional Sami village.

Yes, reindeer herding is a real way of life for the indigenous Sami of Scandinavia. If you ever find yourself above the Arctic Circle, I highly recommend visiting a Sami reindeer ranch. You can feed the reindeer yourself in a stunning winter landscape, discover a lot about these beautiful animals, and also learn about the only indigenous people of northern Europe – the Sami.

A Sami woman, Anneli, explained many Sami traditions to us.

Who Are the Sami (or Sámi)?

Native to northern Scandinavia, recognized as the oldest indigenous peoples of the North, the Sami people live in four countries. They reside in Norway (pop 50-65,000), Sweden (pop. 20-40,000), Finland (8,000), and the Kola Peninsula of Russia (2,000), with the majority of them living in the first two nations. They speak their own Sami languages, which are most closely related to Finnish and Hungarian rather than Norwegian or Sweden.

The Sami are ethnically and genetically distinct from other Norwegians and faced a lot of discrimination within Norway in the past. Outsiders may find it hard to distinguish the physical traits of Sami from the physical traits of other Norwegians. However, the few Sami I met explained that their Sami appearance, in addition to their Sami name, marked them as different in Norwegian society.

Though Sami village people are known nowadays for reindeer husbandry in Norway, only about 10% of them make their living this way. The traditional Sami way of life is fishing and hunting; today many of them, even many of those who still make a traditional living, have moved into towns and cities.

But because reindeer are beautiful and get Santa around and all, we’re going to talk about them first. 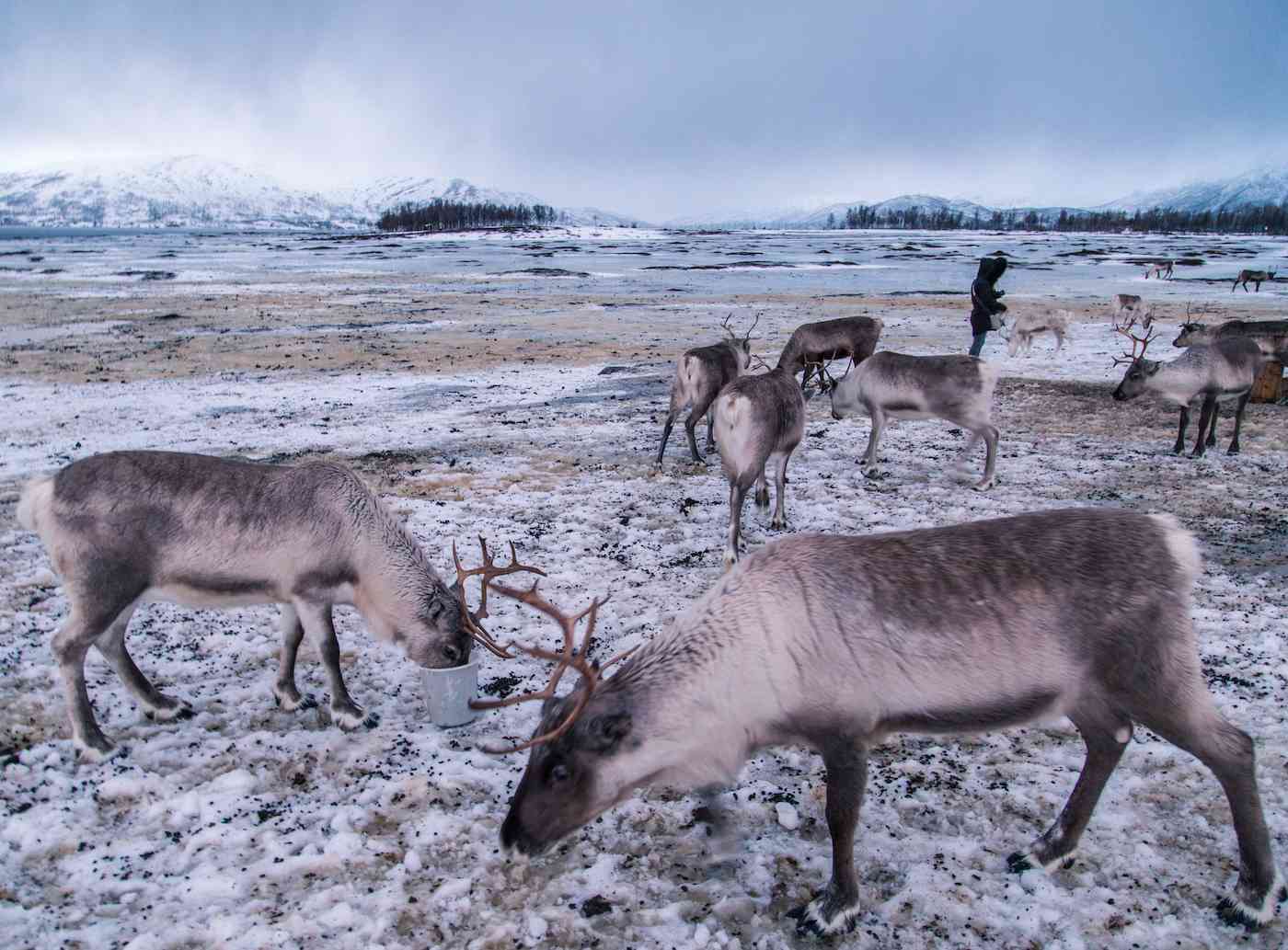 Reindeer in Norway, roaming around their farm

The Sami who herd reindeer make most of their money through the sale of reindeer meat. For those of you who are beyond disgusted by the thought of Rudolph in a soup, or think this all sounds awful and unhealthy (hello LA audience!), you should know reindeer is a lot better for you than red meat. Plus, the reindeer are all free-range and treated very well during their approximately 15 years of life. So, this really is a best-case scenario meat origin story.

In fact, reindeer meat is used in quite a few dishes in the Arctic Circle, as it is one of the few good sources of protein in an otherwise sparse land. For those of you wondering, it tastes quite good, a bit gamey thanks to its 2% fat content, and then it just kinda sits in your stomach indefinitely. But the taste is worth it.

One of the most traditional dishes is called bidos, a stew made of reindeer meat, potatoes, carrots, and reindeer heart. The Sami sometimes eat it at their traditional youth confirmation ceremony at age 14. Yes, I ate it. No, I was not aware there was a heart in it beforehand. Still tasted delicious.

You Can Feed Reindeer Outside Tromsø, Norway 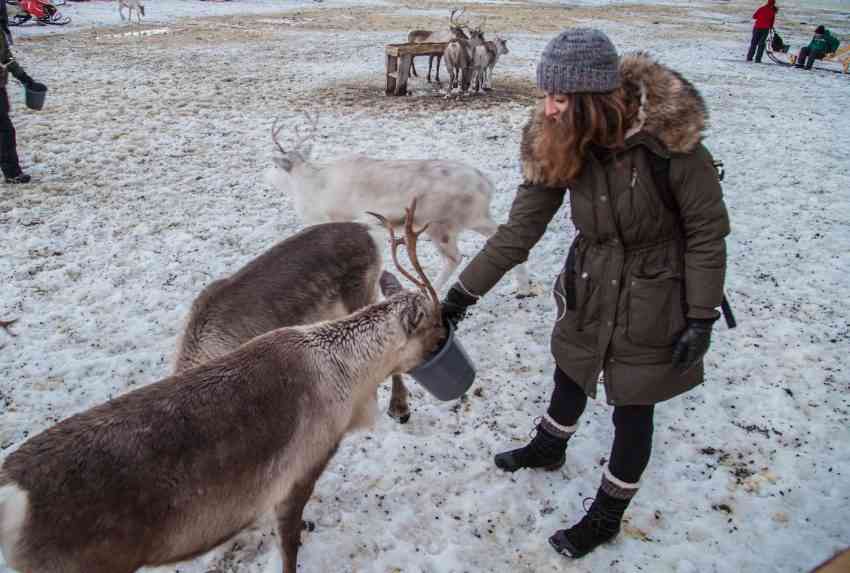 The Tromso Arctic Reindeer experience lets visitors go to a Sami village reindeer farm in order to learn about Sami culture, reindeer, and even help feed the reindeer themselves. Reindeer on the farm are neither hostile nor affectionate; if you have food in your hand, they come to you, and the second they realize the food is gone, you are invisible to them. I would advise keeping an eye on how close your body is to the food bucket when feeding reindeer. No one wants to be accidentally impaled with a four-foot long antler on their Arctic getaway.

When you realize antlers are sharp

The reindeer population in this area of Norway is between 70,000 and 80,000. Wondering where else you can see reindeer in Norway? You can visit farms like these or farms in central and southern Norway, where reindeer are actually more plentiful.

The Sami Use Reindeer For Their Lives and Livelihood

In addition to selling reindeer meat for money, the Sami villagers use every possible part of the reindeer once it is killed. And I truly mean, every possible part. They use the heart and internal organs in food, the sinews in sleds, the fur (which is especially well-suited to keeping out Arctic cold) in clothing to protect them from temperatures that can range as low as -50° F, and the antlers for hunting knife handles and other tools. They even use the blood for blood sausages. The Sami are certainly not a wasteful people.

Reindeer meat is also a great candidate for preservation. It is a great jerky snack for people who traditionally roamed long distances on foot to take care of their herds. Although nowadays, most of the Sami use (much cooler) snowmobiles to get around.

Santa’s Reindeer Are a Lie

Any reindeer with antlers (like this one) in December is female

Yes, your parents didn’t just lie to you about Santa, they lied to you about everything. Reindeer shed their antlers annually. This requires an insane process in which antlers up to 50 inches long and 33 pounds heavy just drop off their head into the snow, only to grow back the year after.

Male reindeer shed their antlers in late autumn after they have won over their respective females. Females are the ones who keep their antlers on until the springtime after they give birth. This helps them defend themselves and fend for food during their pregnancy, so they can give birth to a healthy, adorable reindeer calf.

So Santa’s reindeer would have had to have been female for them to all have antlers at Christmastime. I guess the flying and bright red noses were pretty inaccurate too. 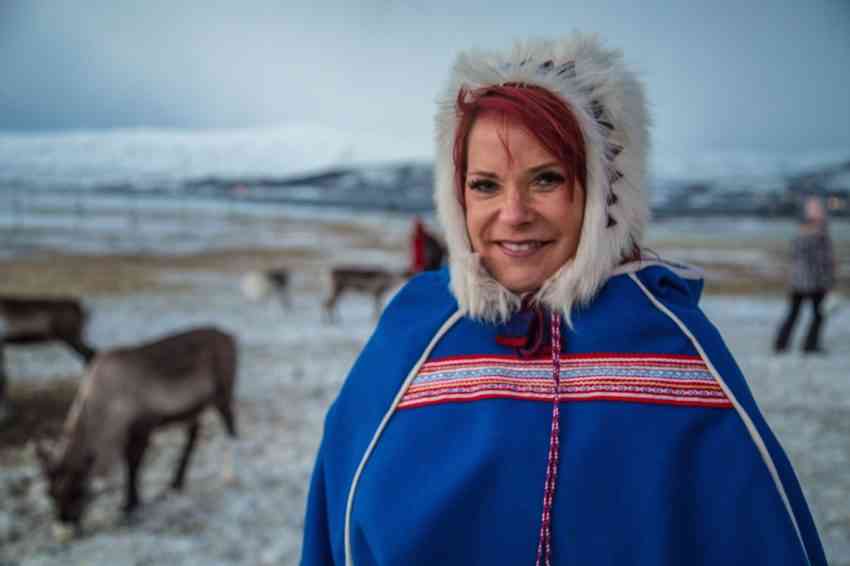 The Sami village people have found a wonderful way to avoid the usual annoying questions the rest of us get about relationship status and where we’re from. Their traditional clothing, known as gákti, tells others almost every detail about their family life and origin. Single Sami have circular buttons on their traditional dress, while married Sami have square ones. The hem of a Sami skirt shows exactly what region the Sami wearing it is from. Silver and gold decorate almost all Sami clothing.

The most important part of a Sami’s traditional dress is probably their belt and everything that hangs off it. In addition to a cup and a coffee bag, each Sami usually has two or three big knives on their belt. They use these knives for chopping, brush clearing, butchering, and almost anything else you can imagine. Sami parents give kids their first knives a few months before their second (yes, second) birthday. They teach children how to use them and to be very cautious with them. [Disclaimer: Lose the Map is not encouraging you to gift knives to your infants. I do not think it will go well.]

Discrimination Against the Sami

Norway discriminated against the Sami, with their way of life banned for decades

Sami languages and Sami culture do not follow national boundaries. The Sami of southern Norway can easily converse with those in southern Sweden. However, they have a completely different dialect from the Sami of northern Norway.

This cross-country existence has created problems of discrimination for the Sami in the past. The Sami were forcibly converted to Christianity in the 18th century. The traditional Sami religion was all but wiped out. The Norwegian government didn’t trust the national loyalty of the Sami people. In the 19th century, Norway launched a campaign of forced assimilation for the Sami. The state prevented them from speaking their language or practicing their traditions and burning their ancient instruments of shamanism.

The Sami in World War II

This attitude finally shifted around World War II, in the grand tradition of governments treating minorities like crap until they realize they need those minorities in order to survive. During the German invasion of Norway, the Sami were initially reluctant to join in on the fight. First of all, they were spread out between different countries and didn’t want to fight their fellow Sami brothers. Second, the Sami had historically been quite peaceful and friendly towards outsiders. They never showed much concern for getting their own independent country. They perceived WWII as a fight over land borders in the North, which was a somewhat difficult idea to get behind.

The buildings of a traditional Sami reindeer farm

However, German forces were very harsh on the Sami. They regarded them as a non-Aryan and therefore “sub-human” people, unlike their Scandinavian countrymen. This incentivized the Sami to join the fight, and they became regarded as critical to the war effort. Thanks to their millennia of nomadic life in the Arctic Circle, the Sami (especially the northern Sami) were able to withstand the cold and navigate long distances in the Scandinavian wilderness better than most other Scandinavians. The state recruited Sami as excellent guides and border pilots for this reason; they also taught Arctic survival tactics and secrets to other Norwegians.

This eventually led to Norway recognizing and protecting the rights of the Sami village people, even creating a Sami parliament in 1989 to represent their interests.

Sami culture is now undergoing a huge renaissance in Scandinavia, after decades of repression by the Norwegian government. Though the Sami religion of shamanism has been all but extinguished, one of the most beautiful Sami customs to make a comeback is known as “joik”.

Joik is a song that has no real start or end; it is just a loop. It is personal to every Sami and is considered one of the oldest singing traditions in Europe. Every member of the Sami tribe has their own joik, but they can only sing someone else’s.

Sami families are often spread out over a large land area, but they frequently hold reunions and regroup. Many families are huge; one of the Sami men I met told us his father had a reunion that included 900 people.

Today, though most Sami live in towns and cities, they do preserve many aspects of traditional life. Some of them still have reindeer farms, and others take advantage of an increased interest in Arctic tourism to show their lifestyles to visitors and make extra money. In the Tromso Arctic Reindeer experience I got to visit a Sami reindeer camp, help feed the reindeer, learn all about these incredible creatures, and also learn quite a bit about Sami village life from the Sami themselves. I also had delicious food while sitting around a cozy warm fire wrapped in blankets, which was a welcome reprieve from the polar winter outside.

If you ever visit Tromsø or travel to another area close to a Sami village, I highly recommend trying to learn a little more about the Sami.

What did you know about the Sami? Are you interested in a reindeer herding experience? Comment below!