In Photos: A Journey Through London at Night

Even in the winter, with the wind blowing my trench coat back, reddening my cheeks, the buzz and lights of London at night captivate me.

I’ve always had the impression that cities only really come alive at night. They can certainly be interesting and busy during the day, maybe pretty even, but the urban centers and mega-metropolises of this world were designed to shine at nighttime.

I visited London in November when the sun is down by 4:30 PM, so I had plenty of hours to experience the shimmering streets, full of energy and a kind of warmth (beer?) even in the chilly autumn air. I dare you to take an extended walk through central London at night, whether it’s Westminster, South Bank, City of London, Kensington, Soho, or pretty much anywhere, and not fall in love.

If you like any of the photos featured in this post, you can view and buy prints of them from my London Nights gallery. If you want to save this article for later, Pin Away below!

Enough with the words now; on to the photos, starting with the walk to Piccadilly Circus.

The Road to Piccadilly Circus

Piccadilly Circus is a pulsing, rushing center of the city, filled with lights and crowds swarming the roundabout late into the night. It’s the heart of the city, though as with most city hearts, it’s also swarmed with tourists.

Just a few blocks down Waterloo Place towards Pall Mall, I came across the Crimean War Memorial in the center of a lit-up roundabout.

That’s one of the amazing things about London at night; stumbling on beautifully lit gorgeous buildings and stunning landmarks you didn’t even know existed, just dispersed throughout this amazing city.

On to Trafalgar Square, home to the National Gallery, Nelson’s Column, and at night, two pretty colorful fountains. A large number of people were gathered in the square, especially for a Sunday night.

I had always thought of the London Eye as the ultra-tourist of tourist attractions, but it is undeniable that some of the best views of London at night can be enjoyed from the top of this ride. You get almost aerial vistas of Westminster and City of London, as well as some of the bridges crossing the Thames, each of which has its own distinct look and beauty. Note for photographers: no tripods allowed in the eye.

Facing west from the top of the London Eye.

No exploration of London at night would be complete without a visit to the infamous Tower of London, which used to hold the monarchy’s prisoners, enemies (sometimes actual enemies, sometimes defined as pretty much anyone that bothered the king), as well as several former or almost-monarchs. The last execution at the tower was more recently than most may think – Nazi spy Josef Jakobs was executed by firing square in August 1941, and the last infamous prisoner was Hitler’s second-in-command Rudolf Hess. Other famous prisoners include Anne Boleyn, Guy Fawkes, and Sir Walter Raleigh, founder of the Roanoke Colony.

All this dark history doesn’t take away from the tower’s imposing stature, or the adjacent architectural beauty of Tower Bridge.

The infamous Tower of London 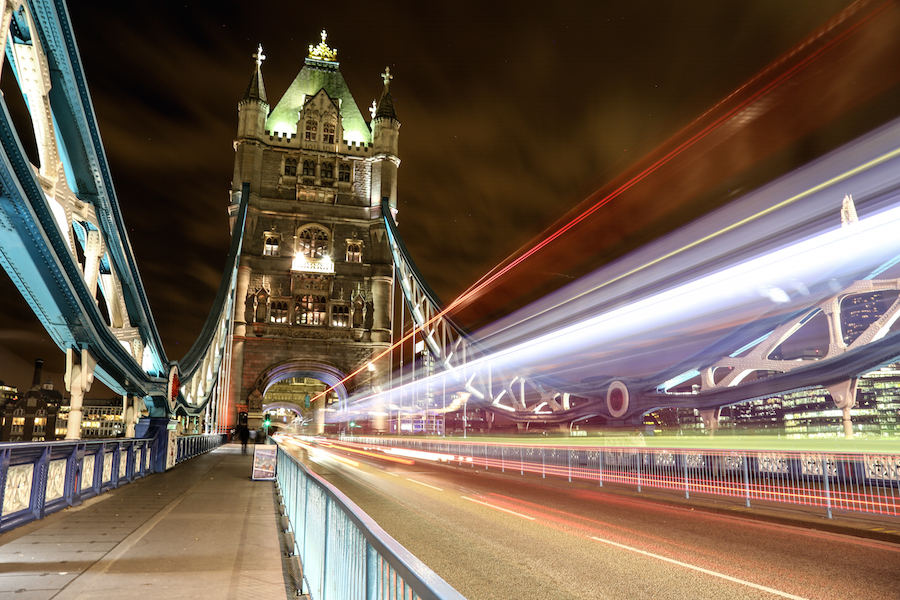 A London bus roars through Tower Bridge leaving a trail behind

If you’re looking to wind your way alongside the banks of the Thames, you will want to take in a stroll on South Bank from the London Eye eastwards, something especially enjoyed with friends. Even in November, there were plenty of people out and about, walking, laughing, cycling, browsing through food trucks and book stands.

Not to mention the great view you get of the more modern buildings of the City of London, from across the Thames – and the great pub you can sit and enjoy said view from, The Founders Arms:

View towards the City from South Bank

On my way to finally explore the City, I suddenly found myself winding through a throwback from Jack-the-Ripper era London, the shady and alluring alley named Clink Street.

Shadows in the alley on Clink Street.

Walking further along I found shockingly talented street performers, along with crowds of students, young professionals, businessmen, and artist types all gathering at local pubs, gravitating towards the warm comfort of a pint of beer.

An incredible performer I passed in one of the tunnels of the Embankment, singing arias for change.

I had always had a mild impression, due to stereotyping mostly, of London as a slightly cold and impersonal city, with citizens a bit too formal and withdrawn for general happiness. As I walked among the loud, smiling crowds, this could not have been further from the truth.

This brings us to the heart of business and finance, the City of London, whose bright lights and skyscrapers tower over the rest of the urban skyline.

One of the best places for night photography is the major intersection at the Bank of England, pictured below from two different angles:

The famous red double-decker London buses run through every couple of minutes, and make for some of the best long exposures.

I walked west from the intersection, on the now-deserted streets of the business district as the cold set in, steadily making my way towards St. Paul’s Cathedral. The lit-up yet empty alleys had their own eerie type of enchantment.

This path ended at one of the most impressive facades in the whole city, St. Paul’s Cathedral, a London icon for over three centuries.

From here I took a cab heading east, because a sudden wind had started to seep through my trench coat, and all the magic of London at night couldn’t stop my poor feet from praying for mercy. Although the fact that I managed to explore five different central London neighborhoods on foot attests to the relative ease of getting around the center of the city, especially for those like me who will walk until their feet bleed.

My last stop of the night was Shoreditch, with its Sunday night food markets and clothing stands restricting traffic on historic Brick Lane to just pedestrians for the most part. If you want to visit Shoreditch, do it on a Sunday, when the neighborhood is at its busiest and best.

After walking through the stalls, I finished my night with dinner at the Shard, the latest, impressive and probably most controversial addition to the London skyline thanks to its unique shape. No matter what your opinions on the Shard’s height and style, the panoramic views of the city are worth a trip up.

Have you been to London? If not, what’s your favorite city to explore at night?! Also, if you want to explore the city’s streets at night, why not take a self-guided tour of London’s amazing outdoor art scene?