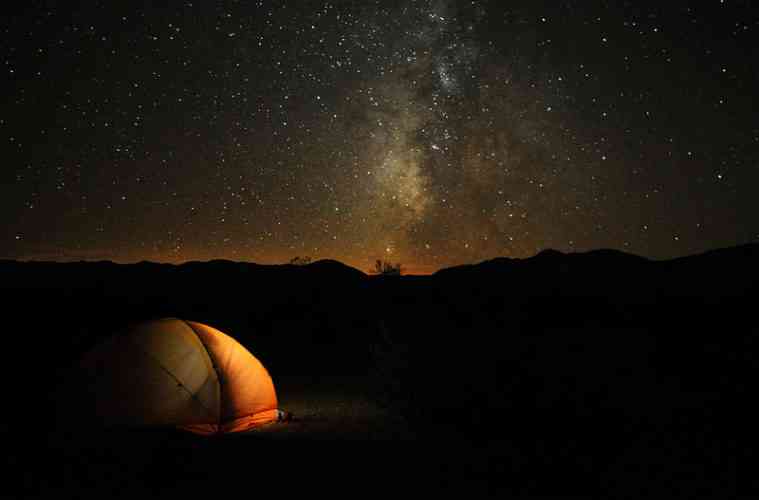 Why You Should Visit Death Valley, California (Pt. 1)

I drove four and a half hours northeast of Los Angeles this past weekend to visit Death Valley, California, known for being the lowest, driest, and hottest place in North America.  Which is why I decided it would be better to go in February when the temperature would be comfortably under 120 F.  The trip started to get interesting after I exited he highway and drove onto Death Valley Rd. at Baker, California.  Death Valley Road begins right where ‘The Mad Greek’ is located.  If you haven’t seen and/or heard of this place, it’s a restaurant in Baker that serves gyros and other Greek food, mostly to locals and truckers.  And has knock-off statues of Apollo and Aphrodite, as well as columns and Greek flags, decorating it on the outside.  Seeing this place in the middle of the California desert feels quite nearly insane. 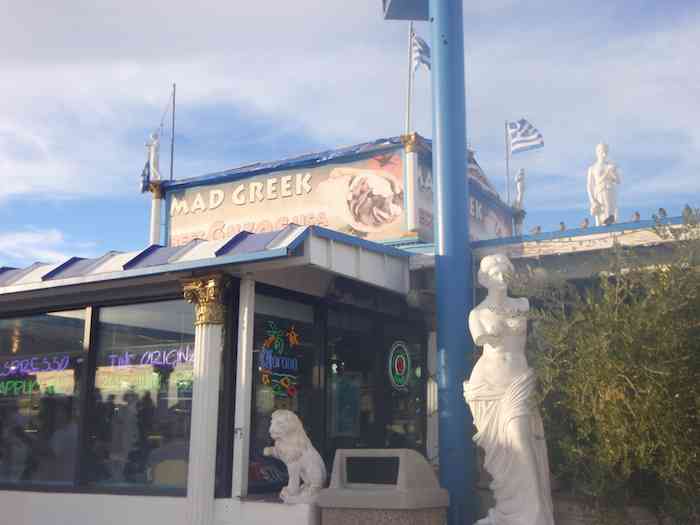 Anyway, the scenery changed from small roadside towns to vast, empty flatlands leading into mountains almost as soon as I turned onto Death Valley Rd.  The two-lane road cutting through the endless desert looked surreal. 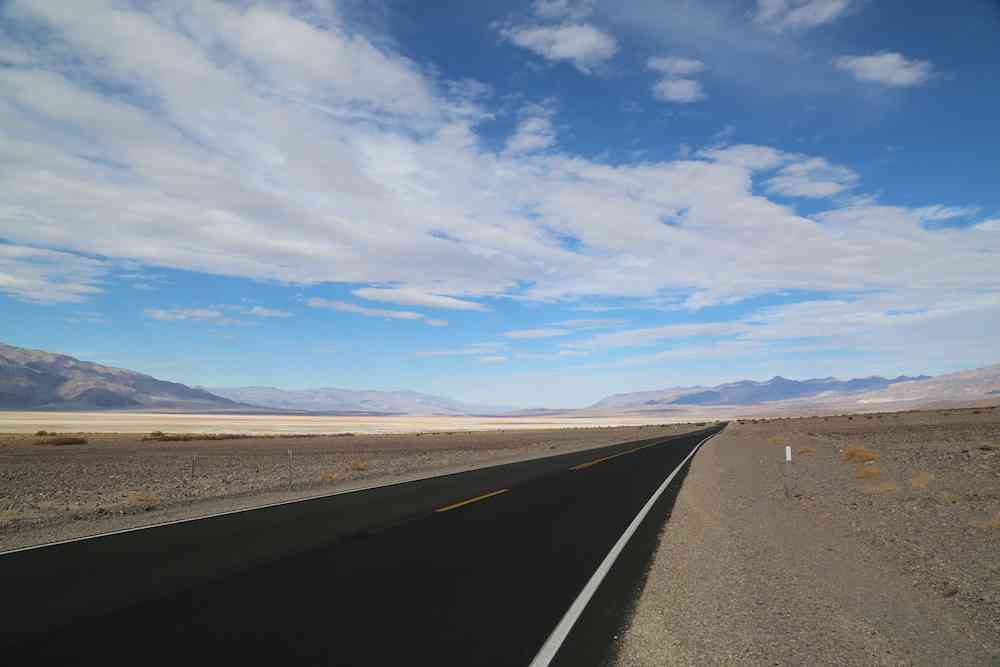 My first stop inside the national park was at Badwater, famous for its salt flats.  I later realized a lot of places in Death Valley had pretty ‘dark’ names (Badwater, Devil’s Golf Course, Devil’s Cornfield, etc.).  Like ‘Death Valley’ isn’t enough.

In any case, walking out onto Badwater feels like walking onto an alien surface.  There are dry, cracked, white salt flats underneath you feet, and where they end the earth is covered with barren mounds stretching out endlessly into the distance, until they stop at the feet of the jagged mountains towering over them.  Apparently Death Valley used to contain inland seas, and when they evaporated they left behind salt.  Standing in the middle of Badwater, one of the lowest points of the valley (282 ft/86 m below sea level), and hearing the wind howl as it barrels down over the mountains, really makes you feel like you’re exploring some strange, inhospitable planet.  Someplace they would leave people to punish them on Star Trek. 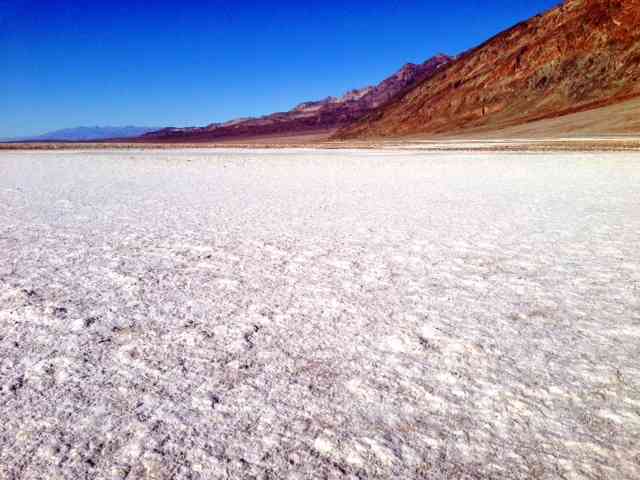 Only six other people were in Badwater besides myself when I snapped that photo.  The seven of us were in a space the size of several football fields, and I remember being awestruck by the general silence and beauty of it all.  Then a school bus pulled up and emptied a stressed-out teacher with about 40 chattering teenagers next to me, and that feeling disappeared.

I got back into the car and drove on towards Furnace Creek, where I was hoping the Furnace Creek Inn would have a room available.  On the way I saw a sign pointing towards ‘Artists’ Drive’, and followed it to see what the drive would be like.  It was about half an hour before sunset, and the light hit the canyon beautifully, making it look like paint cans had been spilled all over the rocks. 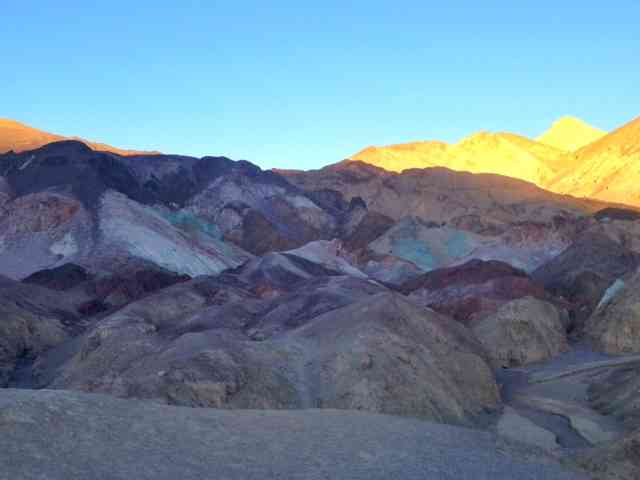 A Place to Stay

I headed to the Furnace Creek Inn, and thanks to the fact that most people had stayed home for Super Bowl weekend, they had a lot of rooms available.  I browsed the Native American gift store, left my stuff in my comfortable and pretty cozy room, and also learned this fun fact: when you’re in the desert, anything metallic you touch will give you a small but annoying electric shock.  Made it really fun every time I had to enter my room.  I tried putting in the key really slowly to avoid minor electrocutions, but never quite got it.  If anyone has experience with this and knows how to stop small blue bolts of light from zapping my hand next time, please let me know.

The Inn had a great view towards the floor of the valley, and I saw a flyer from the Las Vegas Astronomical Society announcing a star-gazing event later on that night with plenty of telescopes set up.  Sounded interesting, especially since one of the reasons I had wanted to visit Death Valley was because it’s considered one of the 20 top dark sky sites in the world, and therefore perfect for stargazing.

Before the sun could set, I headed out to Zabriskie Point to see if I could catch one last daylight view of the valley.    Here it was: 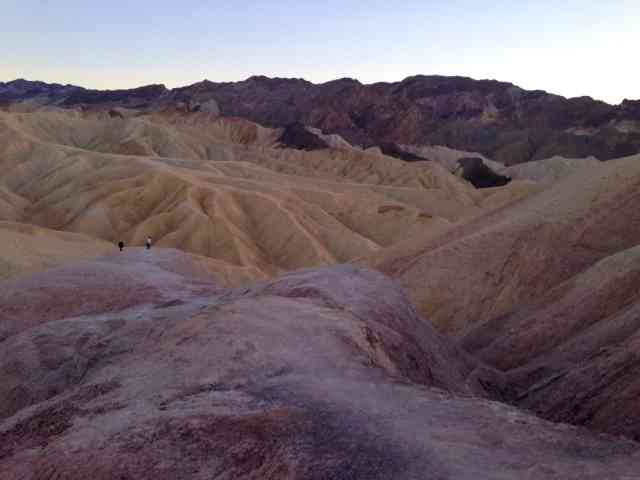 The two dots are people.  What’s most stunning about Death Valley, and can’t really be conveyed in photos, is the sheer size of it and how incomprehensible that size is.  You can drive on a road and think you’re almost at your destination, when in reality it’s an hour’s drive away.  You look at the peaks of the mountains in the distance, and they seem rocky and towering, but nowhere near the 11,000 ft elevation some of them actually are.  You start walking out over sand dunes, or salt flats, or on the rock croppings at Zabriskie Point, and the end of your walk never seems to get any closer.  The park has an area of 3,000 square miles, about the size of Delaware and Rhode Island combined, and the natural formations in it are just huge, but because there are few man-made or small landmarks, it’s hard to understand exactly how huge.

Apparently it’s also a magnet for photographers, because about 30 of them had set up with backpacks full of gear up at Zabriskie Point, waiting to capture the valley in the best possible light.  I took a couple of pictures, and then quickly put away my camera because I had still barely learned how to pull up the menu of my new DSLR, and felt completely out of my league.  So I read over the history of the valley, wondering how people could have ever worked endless days mining and hauling borax with mules and wagons in this environment.  Things like that make me very non-understanding of nostalgia about ‘the old days’.  I get the appeal of a simpler life, and if people want to still use mules for transport and churn their own butter, or whatever else that crowd is into, they can do whatever they want.  But some technology was invented for very good reasons.

That night, after eating a surprisingly fancy dinner at Furnace Creek Inn (I wouldn’t expect a place in the middle of the empty desert to serve fusion dishes), I headed out to the star-gazing gathering wearing five layers of clothing.  The temperature in the wintertime drops to freezing at night.  Before I could even get to the event, I caught a glimpse of the night sky outside my window and quickly pulled over.  My camera skills aren’t up to good night sky photography, so I’m going to use a picture I found that pretty much matches what I saw: 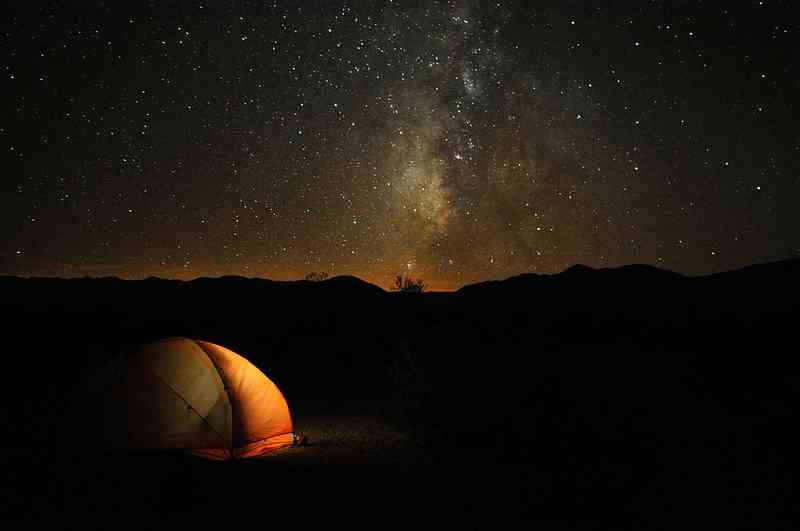 Death Valley Night Sky – ‘Camping in Death Valley‘ by Paxson Woelber is licensed by CC by 2.0

I don’t think I ever even imagined there were that many stars in the sky.  For everyone else who has also grown up in or near cities, please go see something like this once in your life.  It’s breathtaking.   This has to be one of the most spiritual and awe-inspiring experiences of my life.  Seriously, if you ever feel overwhelmed, do this and it will give you a sense of the universe and an idea of your relative non-importance in it – nothing will make your problems seem small and ridiculous like standing on the desert floor with everything around you shrouded in black, staring up at this jaw-droppingly vast and overwhelming sky.

I got back in my car and arrived at the star-gazing event.  It was interesting talking to the astronomers there and seeing some star formations through the telescope.  Apparently the Milky Way is even more visible and beautiful in the summer.  So I guess I’ll be back when the microwave-level heat sets in after all.  After heading back towards my car, I stood against it for a while, still looking up at the sky, not being able to tear my eyes away, taking in the stillness and the silence around me.  Then out of nowhere, 10-15 coyotes erupted into excited howling in the distance.  If you’ve never heard a coyote howl (I never had before), imagine the sound they would sample for a werewolf in a horror movie, crossed with the most inhuman, mournful shriek you can imagine.  It’s that.  You can also hear it on YouTube and freak yourself out while sitting in front of your computer.

In any case, after hearing this go on for a minute or two, thoughts like ‘do coyotes howl before a kill?’ and ‘do rattlesnakes come out at night?’ started floating through my head, so I thought it would be best to get in the car and drive back to the inn.  But damn, it hurt to leave behind that beautiful night.