Things to do in Prague: A Fairy Tale City [PHOTO ESSAY]

Of all the things to do in Prague, walking through Stare Mesto, the ‘old city’ of Prague, is like taking a step back in time.  An 800-year long step back.

Stare Mesto was first built in the 9th century, with the Vltava River serving as a kind of moat between the city and the surrounding area.

The Charles Bridge, bustling with tourists, street vendors, musicians and artists, connects Mala Strana (the ‘Lesser Town’) to the ‘Old Town’.  Medieval Christian sculptures line the bridge on every side.  They are stunning statues, but like most medieval things, they look imposing and slightly murderous.  Then again, the Bible doesn’t really contain the happiest stories, so I can imagine a sculptor would have a hard time coming up with anything peppier.

To enter Stare Mesto, I had to cross the remnants of the old wall of the city.  The lion banners outside made me feel like I was entering King’s Landing 1000 years after the events in Game of Thrones had taken place.  And House Lannister had obviously won.  For the non-GOT’ers, forgive the pointless digression, it’s been a long wait for the new season.

Inside the walls of the city, every single corner I turned made me feel like I was walking through a fairy tale.  The perfectly ordered, pastel-colored houses with identical red roofs that lined every street looked like something you might see at Disney World.  I wondered if the people who lived here also thought their residences looked like dollhouses.  Because the resemblance was unmistakeable.

At some point I realized I would have to be more selective with the photos I was taking, because I would run out of memory before I had walked the first two blocks.  I have rarely before been in a neighborhood where I can honestly say I did not find one ugly, or even mediocre, structure around me.  It was perfect.  And the pinnacle of that perfection was the Old Town Square. 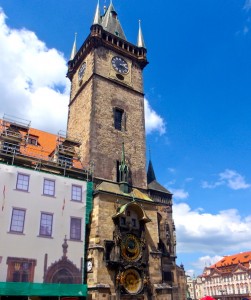 Clockwise from upper left: the Old Town Hall, building I don’t actually know the name of with beautiful architecture, Church of St. Nicholas, and a close-up of the Astronomical Clock on the Old Town Hall.  At first I thought it was insane that the gigantic 30-foot thing I was looking at was constructed so elaborately just to tell time.  Then I heard from a passing tour guide that the giant contraption also showed the current state of the universe, or in other words, the position of the sun, the moon, and the zodiacal ring compared to Earth’s ‘fixed’ position in the sky.  Now I guess you can buy an app to figure that out for you, but I still have no clue where the planets are at any given time, so that fact impressed me.

I walked up the clock tower, climbing up an endless spiral staircase of not-too-steady-looking steps, and was rewarded with one of the most beautiful views of my life:

That’s the Church of Our Lady Before Tyn presiding over the rest of old town strewn about below.  Incidentally, that is one of the strangest names for a church I have ever come across.  After I spent a while admiring the view, I looked around and saw Prague Castle looming over the city on a hill in the distance.  That was my next stop.

The entrance to the castle had intricately constructed statues of what appeared to be stabbings and beatings flanking the side of it.  Of course it did.

The castle itself seemed to stretch on forever, and I know it seems like a silly thing to question, but I’ve always wondered what all those rooms could ever be used for, or in fact how impossible it would be to ever find someone in the mile long hallways of buildings like these.  Personally, I rarely hear someone calling me even from ten feet away, but that’s partly because I tend to be in my own little world at any given moment.

It was quite a long walk to see the grounds of the castle.  I would have loved to see the interior, but most of the wings had gates down that barred visitors from entering.  By far the most impressive structure within the castle grounds is St. Vitus Cathedral.

I loved it.  It was exactly the sort of dark, intimidating, awe-inspiring structure a Gothic cathedral should be.  The entrance and interior didn’t disappoint either.

After a tour of the cathedral, and some more walking around the castle grounds, I headed back to the old town close to my hotel.  It was dark now, so I stopped for beer at one of the bars close to the Charles Bridge.  Beer has a long and proud history in the Czech Republic, and their most famous beer, Pilsner Urquell (one of my favorites), is served almost everywhere.  Before going to Prague, I had heard that Czech people have the highest consumption of beer per capita in the world.  Since I shared this particular hobby with Czech people, that fact had increased my excitement for going to Prague by a factor of ten.  I knew I was going to get along just fine.

I only stayed in Prague for a few days, so I hope I get to re-visit the city some time soon, and perhaps see more of it.  The city has left an incredible impression in my mind; the streets and buildings are the most picturesque I have ever seen, the beer is cold, always available, and culturally accepted as a noon-time drink, and everywhere there is a pervading sense that you have stepped into a different era.  Even if the language is impossible (a fact confirmed by many expats I found living there), that night when I sat drinking Pilsner and looking over the Charles Bridge, all I could think is that Prague seems like a good place to get lost in for a month.