Luleå is the farthest north I’ve ever been. Just an hour’s drive away from the Arctic Circle, the 75,000-person seaside capital of Swedish Lapland is full of surprises. I couldn’t help but think how lucky I was to be there in the middle of the July, with the sun warming up the green landscape, experiencing the mesmerizing phenomenon of almost neverending daytime. 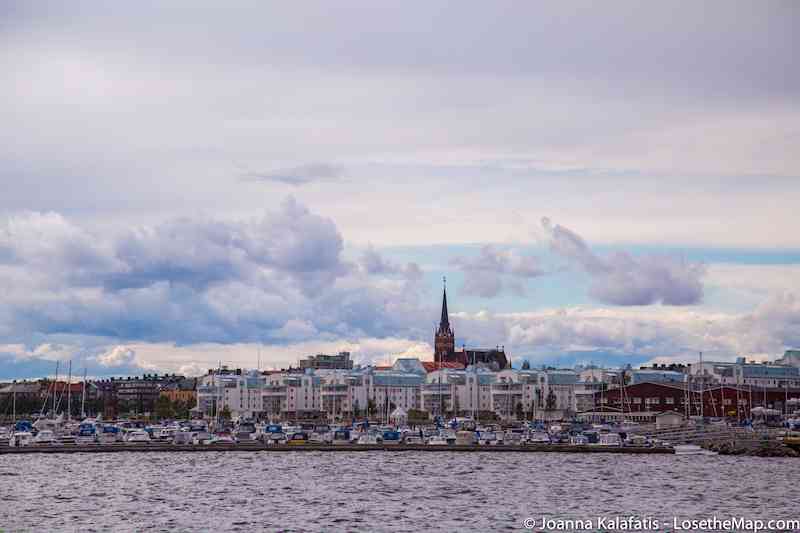 The skyline of Luleå on an overcast morning.

Of course, that meant no Northern Lights as well, but I soon discovered there were plenty of other things to do here. So after a 14-hour train ride from Stockholm, I stepped out into the town and started exploring.

Luleå was established as an industrial town, propelled by iron ore, timber, and steel, as was much of the rest of Swedish Lapland. However, if you have this image of a cold, sleepy, barren little town, let me stop you right there. Because I guarantee you, Luleå is nothing like you imagine.

The factories of Luleå

People LOVE the Outdoors All Year Round

People here seem to hate going inside, and if you think this was just because I was in Luleå in the summer, let me correct you right now. 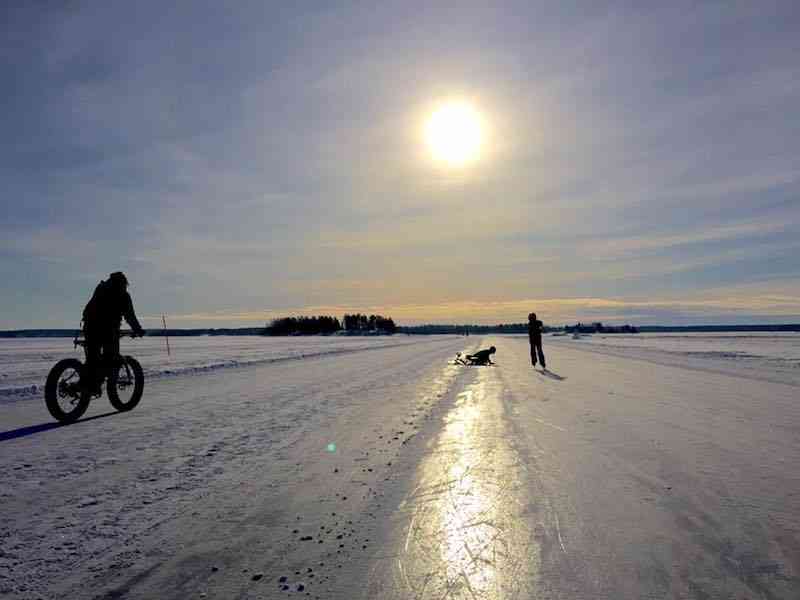 That thing up there is called a fat bike. Fat bikes are essentially mountain bikes with enormous wheels, and they are part of a small but growing movement in Sweden to traverse the land year round, especially when ice and snow make it impossible to take your daily bike ride.

Plenty of houses here are built by the waterfront and next to wooded trails running through the forest or along the coast – almost everyone has access to the beautiful surrounding nature year-round. And if you walk through the eye-catching natural world of Swedish Lapland yourself, it’s completely understandable why the more outdoors-minded choose to live here. 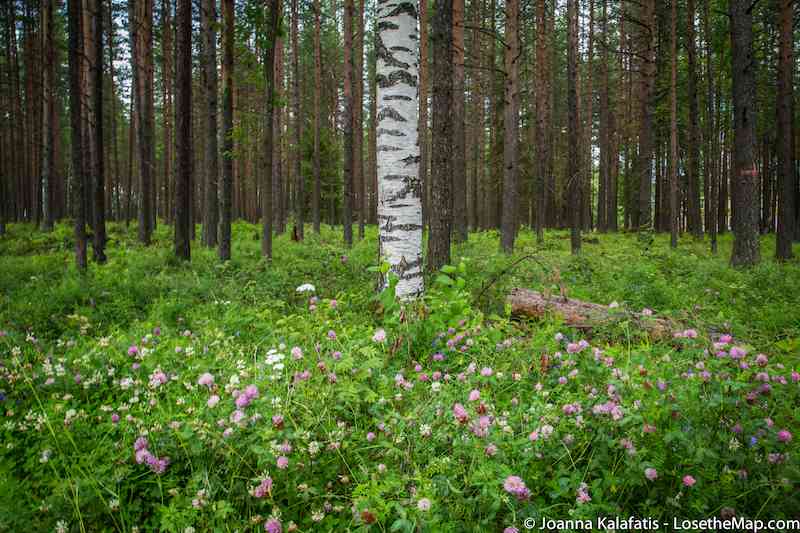 Luleå is mostly surrounded by this prettiness right here.

People in Luleå Are Active

Because people here can’t get enough of the beautiful outdoors, sports like fat biking, kayaking, skating, and anything else that gets locals out and about are pretty popular. 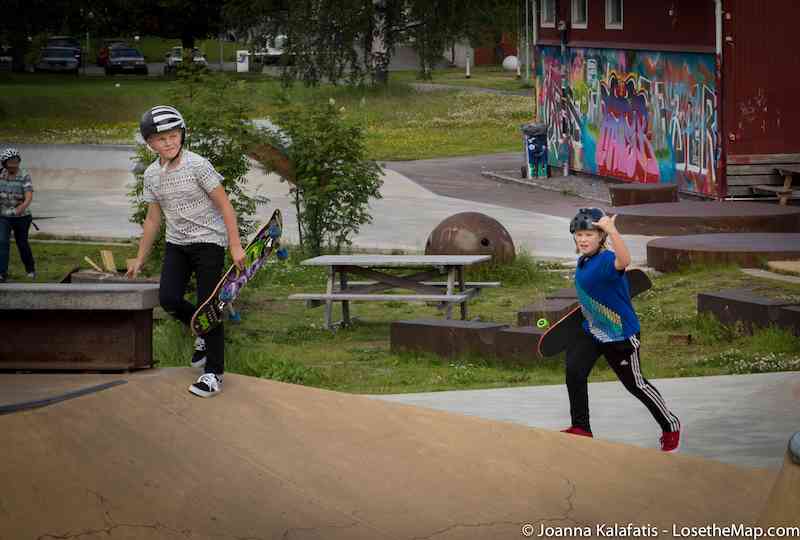 I’ve never met more active people anywhere on the planet, and I live in LA – the town hiking and surfing built.

The fat bikes I mentioned before can handle snow, sand, and pretty much any other terrain you throw at them, as long as your legs have seen the inside of a gym or the seat of a bike in the last year. Mine had not, so I had some problems; however, our bike tour guides from Ouroboros Luleå – Olov, Erik, and Susanne – easily sped up and down inclines which made lesser men (ahem, me) simply fall off their bikes. 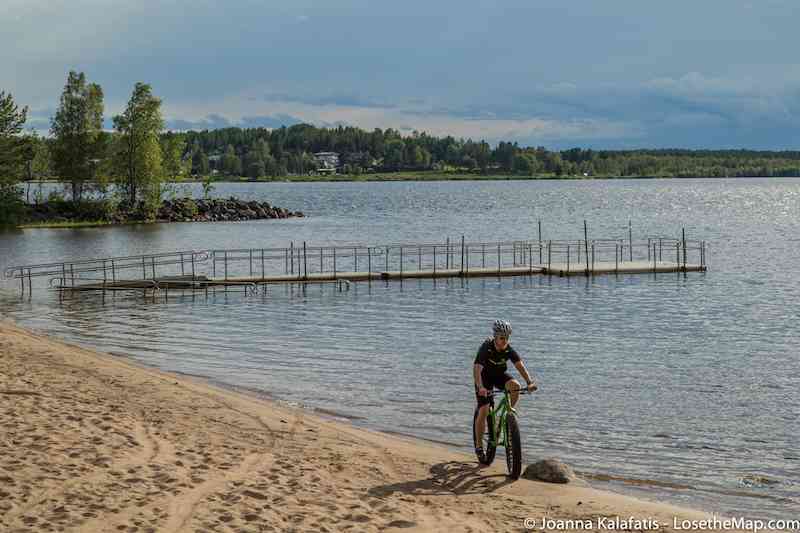 Lapland is the Home of the Sami

Who are the Sami? Before the Swedes, before the Vikings, before almost everyone you associate with Scandinavia, there were the Sami. The first accounts of their culture come from a Roman historian in 98 AD, though they certainly existed thousands of years before that.

Today, they are the only remaining indigenous population in Scandinavian Europe, living in northern Sweden, as well as parts of northern Finland, Norway, and the Kola peninsula of Russia.

The Sami originally made their living as nomadic reindeer herders, and about 10% of them still do that today, though the harsh conditions of such work has made most move into more urban jobs, or stick with coastal fishing and fur trapping, two other popular Sami livelihoods. A fair amount of them now live in the Luleå area. 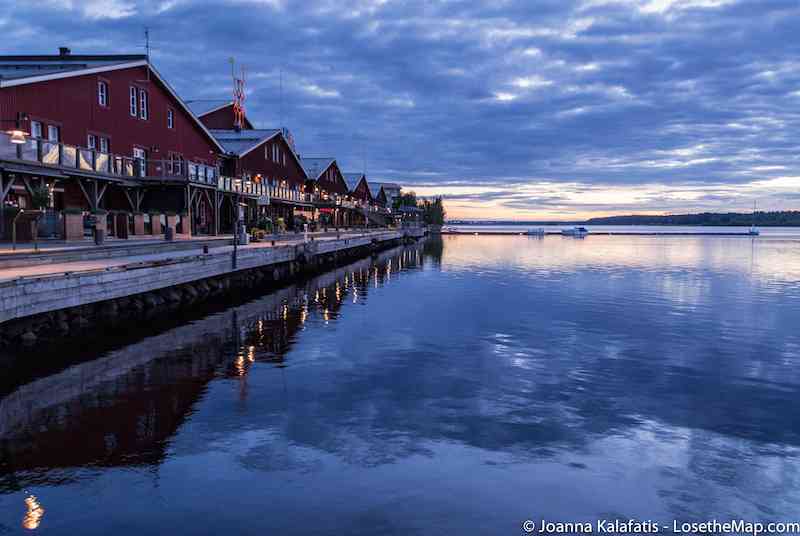 Many people in Luleå will tell you that they don’t technically have a midnight sun, because the phenomenon occurs from the Arctic Circle on up. However, the only darkness you really get in the summer is an hour of blue-lit twilight, so I still count it as midnight sun.

There’s no question that your body clock gets thrown off; I caught myself yawning at what I thought was 8 PM or so, only to realize it was almost midnight, and then I got up in the middle of the night to close the curtains because the sun was poring in at 2 AM.

But it doesn’t even matter, because you wander around at “night” to marvel at this: 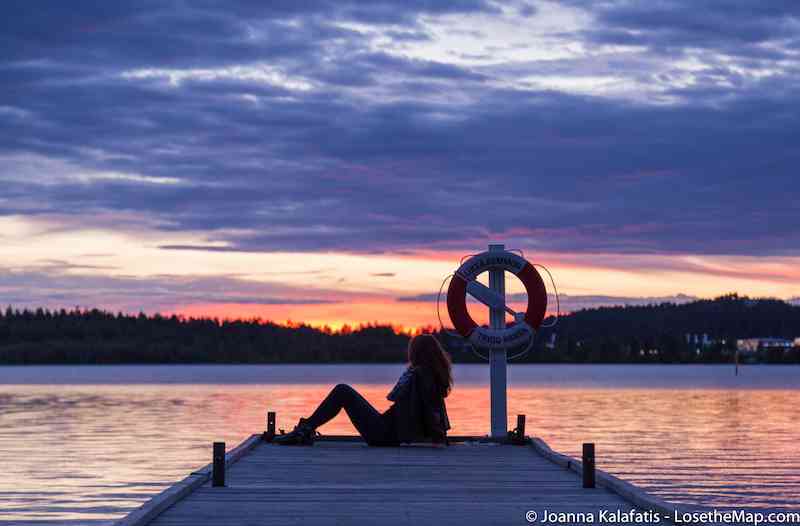 Taken exactly at midnight in Luleå

You know how Sweden has quite a large tech sector for its population? No? Well, I’m telling you now for the purposes of this story.

Luleå is no exception to Sweden’s tech boom, as in 2013, Facebook decided to open its first data center outside the US here.

We couldn’t get inside because, ironically, Facebook is very concerned with its own privacy, but I learned a little more about the decision to locate the center here. First of all, the area’s hydroelectric dams, originally built to support the steel industry, are now generating a surplus of power as the industry declines, which has been redirected to the Facebook data center to make it the most energy efficient computing facility in the world.

Second, the center takes advantage of freezing outside winter temperatures to cool the servers, taking cold air from the outside and pumping it in. So Facebook’s decision makes a lot more sense now, right?

Reindeer Meat is a Thing – And It’s Delicious

Sorry to my fellow vegans and vegetarians, but as a diehard carnivore, I could not get enough of the reindeer meat in Swedish Lapland. On my first night in Luleå, I tried a traditional area dish of the Sami called souvas – dry-salted and smoked reindeer meat served in a thin bread. 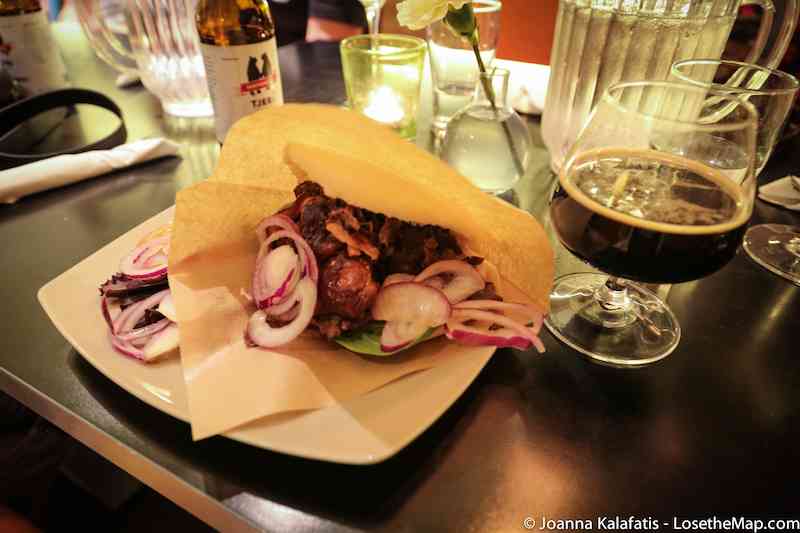 All I can say is: I HIGHLY recommend it.

The First Indoor Shopping Mall was Built in Luleå

The mall, appropriately named “Shopping”, is still in the center of Luleå on the street of Storgatan, so you can visit and shop today if you like.

You Can Board an Ice Breaker 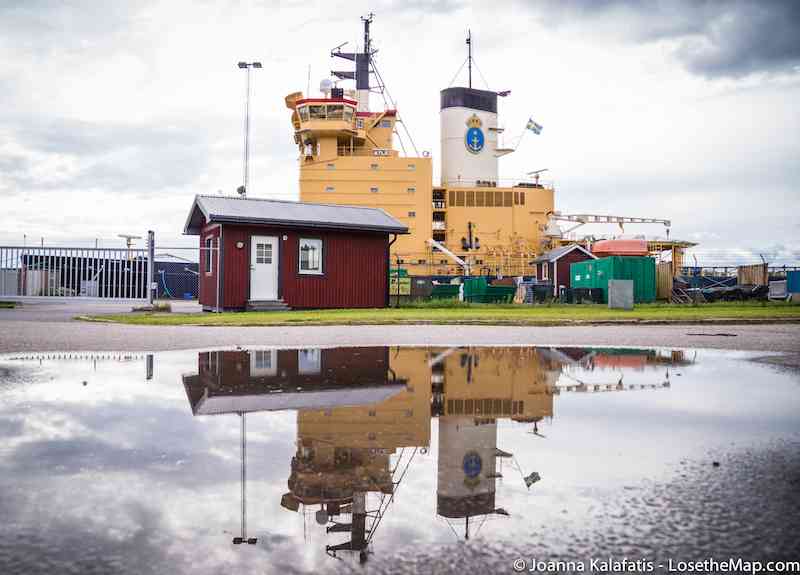 Thanks to its northern location, Luleå has a fleet of ice breakers sitting in its port.  If you want to take a closer look, you can book an icebreaker tour on Saturdays, and disembark to go for a walk on the frozen sea of Swedish Lapland. 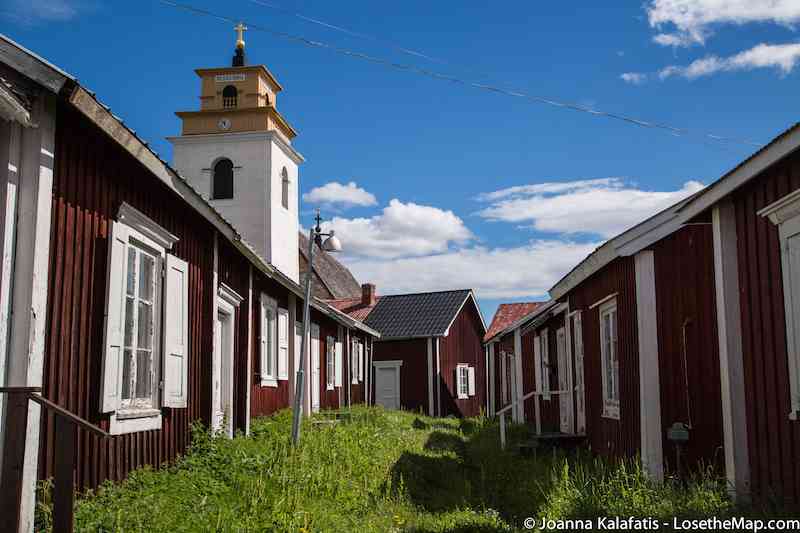 A few kilometers away from the town center lies Gammelstad, where the original town of Luleå was first built. After the city center was moved, Gammelstad became a church town, where farmers in Swedish Lapland would stay for the weekend in order to attend church services if their farm was more than a day trip away. Now, it is a living UNESCO World Heritage Site.

I say “living”, because the town requires that a certain population still populate its bright red wooden houses 1-2 days a week, in order to keep up the “church town” designation.

So though it may look like something out of a Disney movie, most of the small cabins in Gammelstad are actually still in use. In fact, Gammelstad has so much intriguing history and culture behind it, that I will be covering it separately in my next post.

All in all, my visit to Luleå is one of the most unique and unexpected experiences I’ve had so far – and isn’t that why we all travel in the first place? 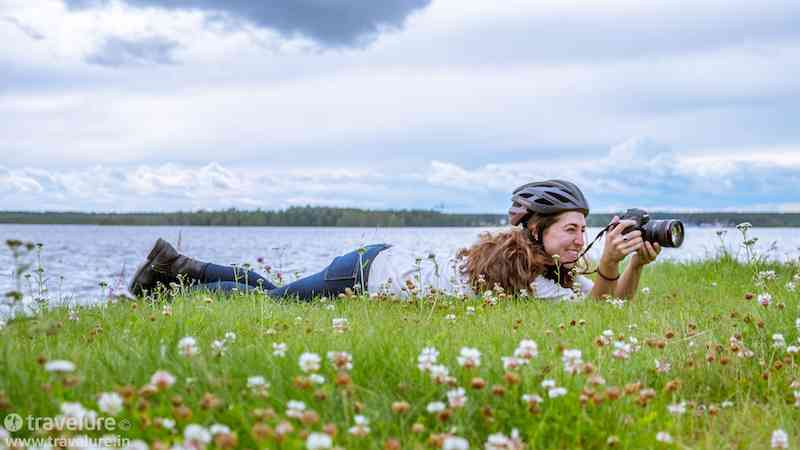 Image by Ajay Sood of Travelure

Stay tuned for more articles on Gammelstad and the Sami. Have you visited Swedish Lapland or Luleå? What was your experience like?

If you liked this article, pin away! 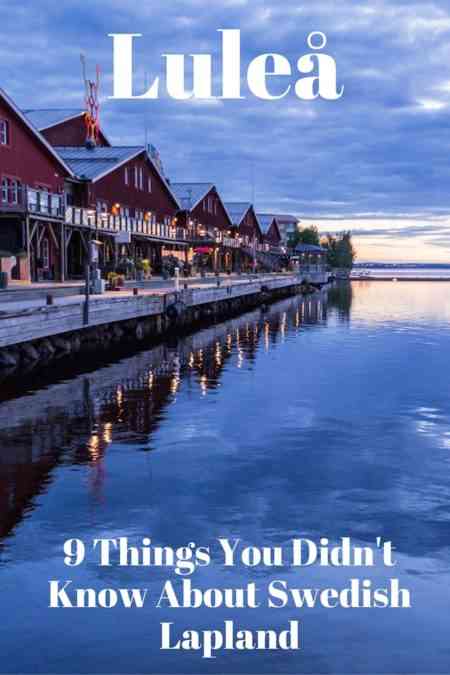