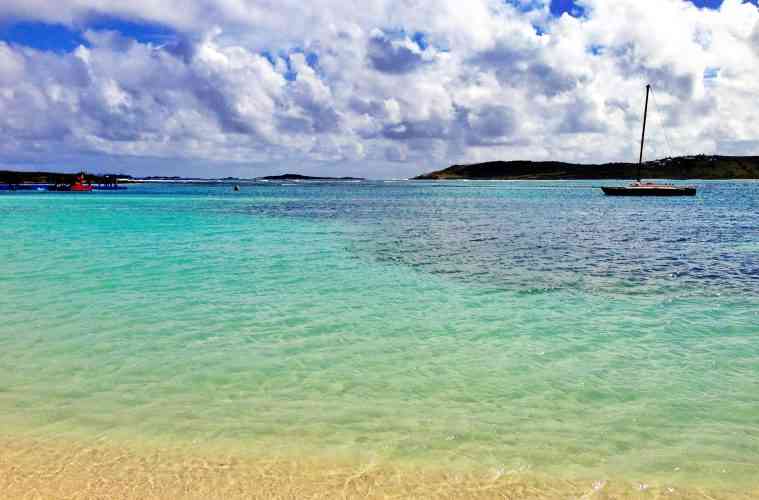 Le Galion Beach: The Most Relaxing of St. Maarten Beaches 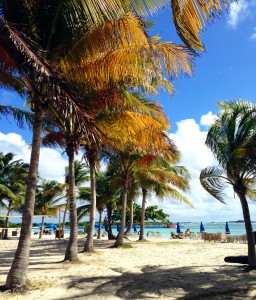 French side of St. Maarten

As we drove along the picturesque path, passing some roadside bars, then brightly colored houses, then winding through lush green trees, I couldn’t help watching everyone we passed.  For a tiny Caribbean island, St. Maarten is  surprisingly diverse.  The island’s own website estimates that there are over 90 ethnicities living here, while some locals estimate about 100 ethnicities present on the island.

This diversity was apparent in the food available.  We passed a Greek bar/restaurant, something Moroccan, an Italian pizzeria, a Texas-inspired BBQ place, and on and on it went, all of them crammed between these wonderfully simple wood-and-palm-frond bars with outdoor cafeteria style benches, that already had music playing and tipsy people drinking beer at mid-afternoon.  Yes, I liked St. Maarten.

Finally, we arrived at Le Galion Beach, and the sight of clear blue water coupled with the feeling of sinking into warm sand almost drove me insane with happiness.  I have always loved the beach, probably a remnant of growing up in a seaside town in Greece. 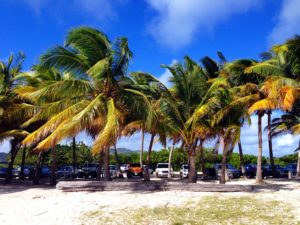 This was a paradise for windsurfers and kitesurfers.  A couple of them were out in the water, beyond the point where the peninsula on the left hand side provided some shelter to us from the wind, riding back and forth at full speed.  I decided I would check into rental prices later and perhaps go in myself.

I looked at the smiling, happy people all around me, and wondered what it is about being on the beach that absolutely erases any worry or stray thought from your mind.  After a couple of minutes of listening to the waves coming in lazily, I lapse into a grinning state of semi-consciousness, and it will usually take three or four good loud screams to get my attention after that.

I finally got myself to undress, get up, and dive into the water.  It was perfect.  After a while, I walked down the beach, towards a windsurf school I could see in the distance.  A group of slightly intoxicated, laughing people passed me and gave me the kind of greeting you’d give upon seeing a friend that was previously presumed dead.  Then they continued on and I got a crazy impulse to just join them for the rest of the day and get some of their beer.  But no, I had said I was going to check the water sports school out. 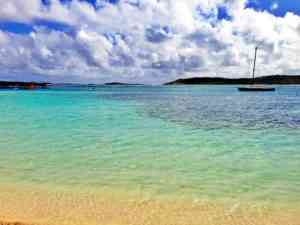 I came up to the school and saw 3 tanned French men splayed out in chairs or just leaning up against poles, drinking up and joking around with each other.   When I asked them about prices for renting windsurf equipment, they told me I’d have to wait for Jean Claude Renault, or some name to that effect.

As I pulled up my own patch of sand to sit on, I realized that surfers everywhere in the world are exactly alike, even on St. Maarten beaches.  All of them sit with the same relaxed posture, stare out to sea for hours with that half-vacant far off look, and when you finally get curious and ask them what deep philosophical dilemmas could possibly be taking them this long to work out (maybe not in that way), they give you a content smile and mention something about figuring out what time the wind and/or waves will pick up.  Then suddenly a strong gust of wind comes in, and the same people who had been imitating beached whales just a moment before jump up, grab their equipment, and fling themselves into the sea before you even notice they’re gone.

Long story short, I didn’t get to windsurf that day because Francois Peugeot (look, I don’t remember) was late in coming, and I wanted to check out some other locations on the island as well.  Also, to be entirely honest, I had only windsurfed about four times in the last year, and I could hear the howling of the wind beyond the break even from my spot on the shore.  So I thought maybe it wasn’t the best time for someone who was pretty rusty with the sport and not that good to begin with.

For more stories about St. Maarten’s French side, check out GoNomad’s story on ‘Paradise With a French Twist‘.