Cartagena may be right on the Caribbean coast, but its function as a major port city and oil extraction site make the city-adjacent beaches…somewhat less than alluring. If you truly want to spend time on beautiful Cartagena beaches, you’re going to have to take a little trip outside the city itself.

While there are sandy beaches in Cartagena’s Bocagrande neighborhood, the water there is not the best. The good news is, there are easily-reached alternative options. 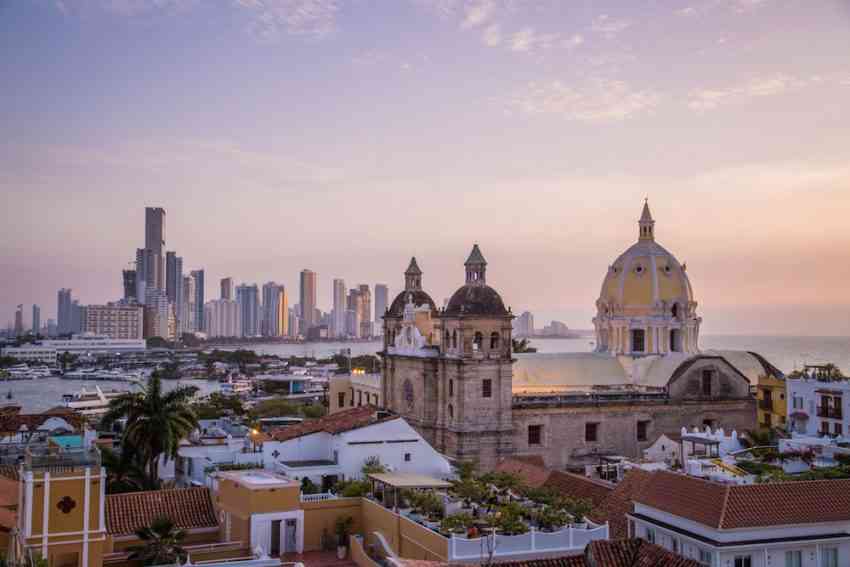 And also, Cartagena itself is pretty mesmerizing

The two you might come across most often are Isla Baru, and Isla Grande (part of the Rosario Islands off Cartagena). Many people also visit Punta Arena beach on Tierra Bomba, located just a short boat ride away from the city, which you can combine with a trip to Isla Baru.

Both Isla Baru and Isla Grande are about an hour away, though reaching Isla Grande takes a little longer. Both are considered to have some of the best beaches near Cartagena.

So if you only have a day or two to spend on a tropical island paradise outside the city of Cartagena itself, where should you go?

I heard a lot of conflicting advice, so I decided to try both beaches and share my thoughts here. That’s right, I spent time on two different Caribbean beaches all to help my faithful blog readers out. 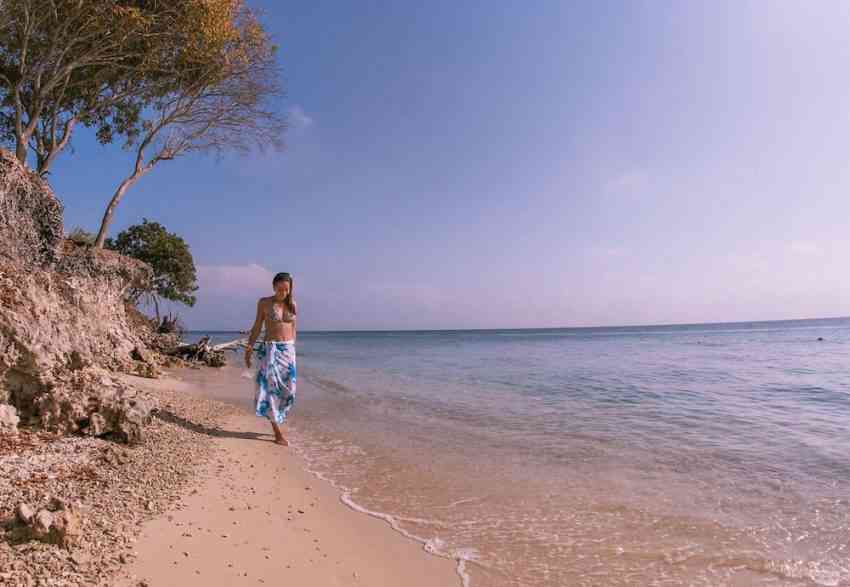 Me, working hard for you

My work ethic knows no bounds. Read ahead for my impressions.

First things first: some general information on the beaches. Isla Baru is not technically an island, but rather a peninsula close to Cartagena.

You will also hear a lot of people talking about Playa Blanca. Though for some reason a lot of information makes this point confusing, Playa Blanca is ON Isla Baru. They are not separate destinations.

Also, though a lot of sites list Isla Baru as part of the Rosario Islands, that does not seem to be the case either. Here are some details on Isla Baru: 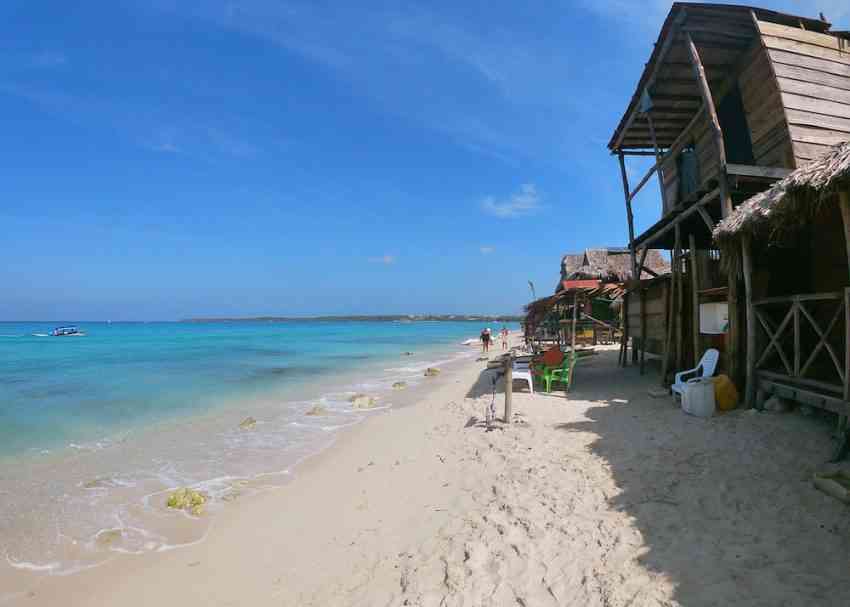 Getting There (Plus Costs)

You can get there via lancha, a speedy and stomach-churning boat that leaves around 9 AM from the port of Cartagena, right outside the historic center. If you’re going to take a lancha, don’t eat anything heavy for a couple of hours before unless you wish to reacquaint yourself with your meal while on the turquoise seas.

Time to Get There by Lancha: 45 minutes

Local Tip: ALWAYS HAGGLE. The price of the lancha depends on what boat you get, how many people are trying to get on it, and whatever the lancha driver tells you. But usually, if you push back just a little you’ll get something below the “gringo price”. You’re still probably paying more than locals, but at least you get a slight discount. Further breakdown of the lancha cost – port fee: COP16,500 [~$5US] plus COP20,000-40,000[US$6 – $12] for the boat.

However, you can also get to Playa Blanca by car. It will be more expensive, but you don’t have to go by the schedules of the lanchas for either departure or arrival and can be more flexible in your times. Be warned though, cars can’t continue past a certain point and you will have to walk almost a mile on a dusty road in the heat.

However, if you also want to see other sites on Isla Baru, like the bird sanctuary, the lancha won’t get you there while a car will.

Duration by Car: 1 hour and 15 minutes (including the walk to the beach)

Hostel Mamallena offers a shuttle for which you pay COP50,000 ($16) for a round trip. There are about three departures a day from Cartagena and from Isla Baru. For specific information, check out the Mamallena Hostel website.

Duration by Shuttle: 1 hour and 15 minutes

Should You Stay Overnight?

Isla Baru, thanks to its proximity and ease of access from Cartagena, can get VERY crowded.

To avoid crowds, lots of people end up staying overnight, so they can enjoy Isla Baru in the early morning and late afternoon hours before the lanchas full of sun-seekers arrive and after they depart.

Since most lanchas have left by 4 or 5, you can still enjoy the one of the most famous beaches in Colombia with the sun out and way fewer tourists.

Most of the hotels in Isla Baru are eco-hotels, meaning very basic accommodations so as to not overwhelm the environment and landscape. However, most of these options are also right on the beach, so you will fall asleep to the sound of splashing waves. 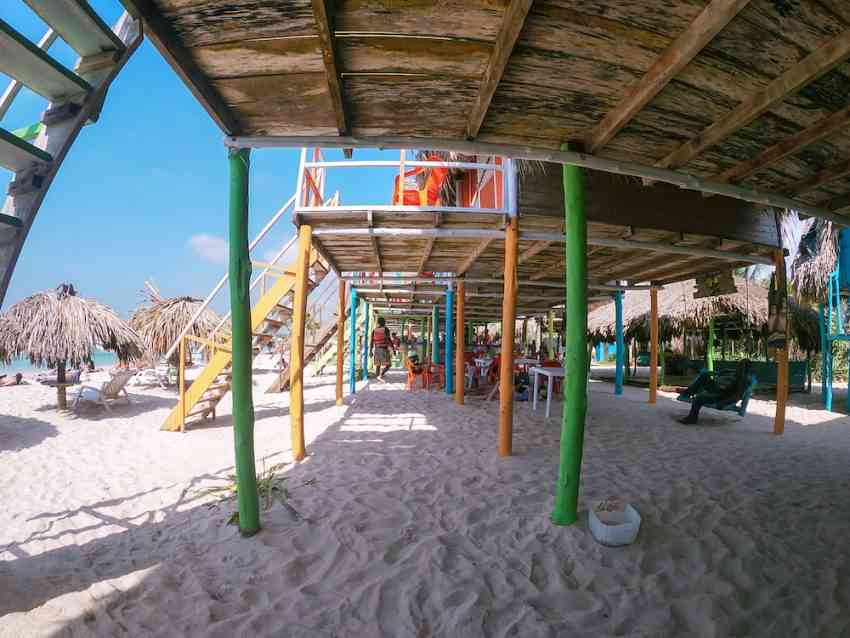 Eco hotels up on stilts lining the beach of Isla Baru

Local Tip: Masseurs on the beach will come up to you and start massaging you, even if you say no, then probably expect to be paid. If someone starts massaging you and says it’s fine, you don’t have to pay, best to stop them anyway.

Activities Outside the Beach

You can also go snorkeling nearby, in the sea towards the Rosario Islands. However, the real high point of Isla Baru is undoubtedly the beach itself, so there aren’t a ton of activities outside Playa Blanca. Overall, while I had a nice time at Isla Baru, the truth is I didn’t last more than a few hours there. It was incredibly hot with little shade, the very few stretches of beach with lounge chairs were quite expensive, and the sheer amount of people in the water and on the beach made it hard to relax.

Being Greek and spending a lot of time there, I’ve had lots of experience with overflowing beaches. Playa Blanca felt packed beyond anything I had experienced.

The water has a beautiful turquoise color, but if you get there any time after 11 AM it’s going to be murky and opaque thanks to the number of people stirring up sand and leaking suntan lotion.

Isla Grande is the main island of the Rosario Islands. I spent two days there and honestly wished I had spent one more night.

The rest of the Rosario Islands are also supposed to be stunning; however, I was on a budget and besides Isla Grande, taking another Rosario Islands day trip seems to involve hiring private boats or booking tours.

Isla Grande, however, was an unforgettable experience and includes perhaps the most activities and the best of the Rosario Islands. See the details of getting there and what to do once you’re there below. Under the waters of Isla Grande

Getting There (Plus Costs)

There’s really only one way to get to Isla Grande, and it’s by boat from Cartagena to the Rosario Islands. Unless you’re splurging on a private boat ride, that means a tumultuous lancha trip on the high seas.

I found the trip unbelievably fun, but protect your spine.

Local Tip: If you want to minimize the number of times you get thrown up and down on the lancha, take a seat towards the back. The boat’s front is always tilted up and has less weight, so it’s much less stable than the rest of the boat. I definitely felt less damage to my spinal cord when I moved towards the back for my second ride. Unless you like ricocheting on a boat in the Caribbean, move back.

Should You Stay Overnight?

YES. Sorry, trying not to scream my bias here.

Yes, stay overnight. Isla Grande feels much more removed from the urban noise and generally relaxed than Isla Baru, so a couple of days here will definitely leave you feeling rejuvenated.

But beyond that, there is a lot to do on Isla Grande besides the beaches, and you definitely need a couple of days to get it done.

The options here, like in Isla Baru, are mostly eco-hotels, so don’t expect high-grade accommodations. Basic bed, mosquito netting, and daily 12-hour downtime when it comes to charging electronics.

Try to get an eco-hotel right by the beach, so you can be right next door to the clear, beautiful waters.

Local Tip: Head to Restaurante La Pola and the beach by there. When we went almost all the customers were locals, and the beach only had a handful of people laying on it. It is VERY relaxing (and the food is quite delicious). 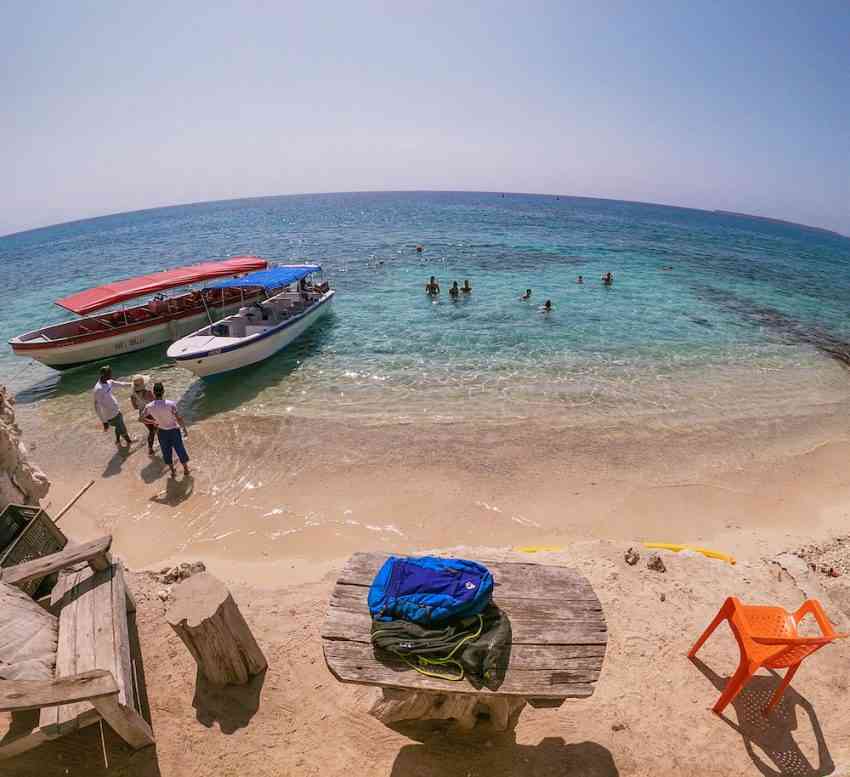 Activities Outside the Beach

In my opinion, this is where Isla Grande really shines. Most hostels and eco hotels on the island will provide their own guides for any of the following activities that require guides: 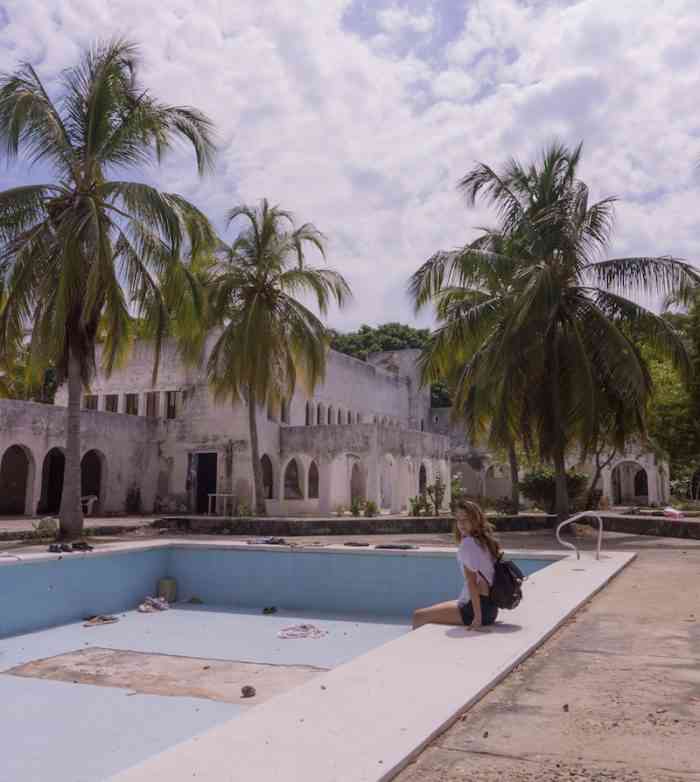 Take a canoe tour through the mangroves, which are absolutely mesmerizing.

Visit Pablo Escobar’s abandoned summer home, which is still standing on the island. You will find a woman sitting by the abandoned pool who will ask you for COP10,000 to tour the home. I don’t think this is any kind of official arrangement or entry fee. I suggest you pay her anyway.

Take a nighttime dip in the bioluminescent lagoon of Isla Grande. It can be hard to see the bacteria light up in the lagoon, but the nighttime boat trip to the lagoon itself is worth it. I can’t overstate how magical it was to make our way through the sea in the nighttime. Floating in the water with no lights and the Milky Way lit up in all its glory above us.

Tour Orika, the local town on Isla Grande. Stop by and get a beer or a snack in the local town, and walk around to get a feel of how the islanders live.

Isla Grande is definitely more of a relaxing getaway from Cartagena. However, it is a hard place to truly know and enjoy in a day. If you have time, set aside at least two days/one night for Isla Grande.

I would also recommend spending weekdays on Isla Grande, where you will encounter even fewer tourists. Save your weekend for experiencing Cartagena nightlife instead. A beautiful sunset on an isolated beach on Isla Grande

In the end, even though I personally preferred Isla Grande, I don’t want to say you should disregard either island’s beaches

If you have at least 5 or 6 days in Cartagena, I would say spend 2 days/1 night in Isla Grande for a nice city break. Then at another time, spend half a day on Isla Baru (morning to afternoon), before getting back to Cartagena, changing, and having a great dinner and cocktails.

Though Isla Baru has its charms, Isla Grande has so much more to do beyond the beach and feels like an actual escape from the city. Baru has so many tourists and aggressive vendors, that unless you stay the night there (to be fair, something I didn’t do myself), I don’t see how you could have much of a relaxing experience.

If you have more time in Cartagena, you could even go further away to Santa Marta, which is a five-hour bus ride away. Santa Marta is an incredible national park with beautiful beaches and nature.

The question of Isla Baru vs. Isla Grande for Cartagena day trips also surprised me because it’s the first time I can truly say I’ve been led in the wrong direction (in my opinion) by locals. I always ask locals what they recommend – something I often suggest other travelers do on my blog as well – and in this case, every local definitively recommended Isla Baru over Isla Grande.

I wonder if there’s something I missed in the comparison, but I don’t think so…perhaps another trip back to make sure?

Have you been to either Isla Baru or Isla Grande, or taken any other day trips from Cartagena? Let me know your thoughts below! If you want to save or share this post, Pin away below! 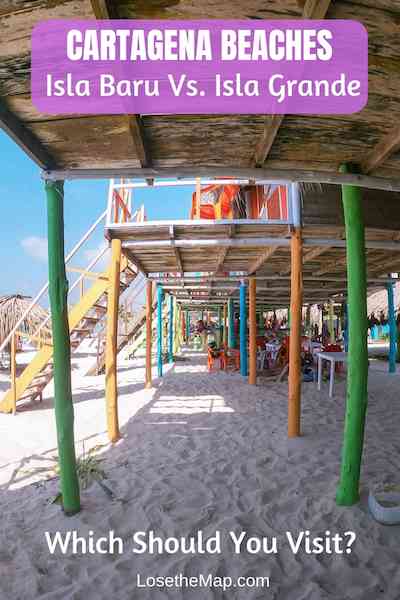