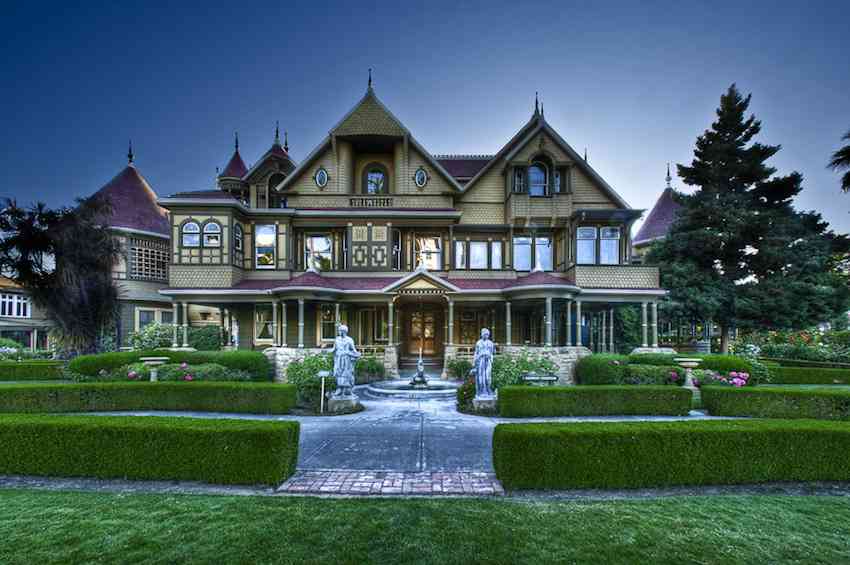 Front of the house at dusk – used with the permission of Winchester Mystery House, LLC ©David Swann

Surrounded by palm trees, its yellow walls and red roof gleaming in the California sunshine, the house doesn’t look like anyone’s idea of a haunted mansion at first. In fact, it’s downright whimsical. With 160 rooms and odd architectural details like doors that lead to nowhere and stairs that lead up to a ceiling, the house seems like a quirky maze more than it does a nightmare factory. 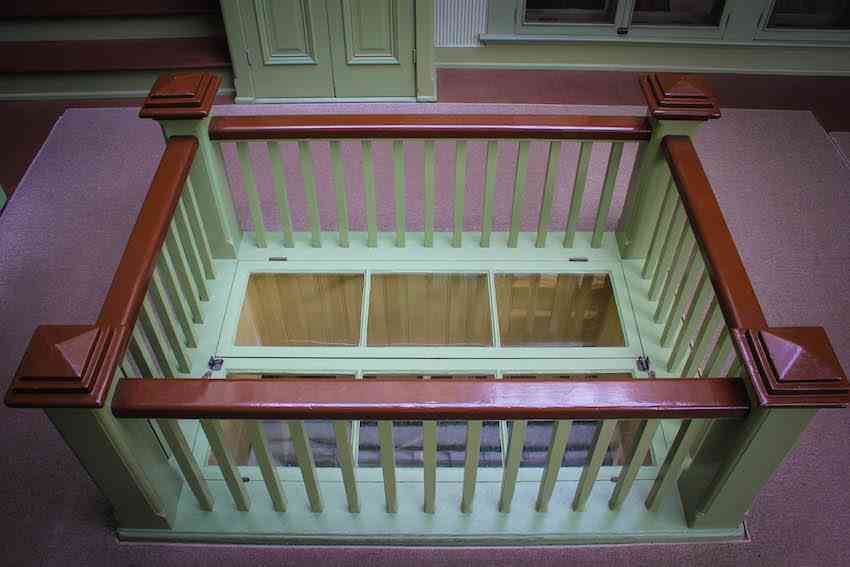 Window in the floor – used with the permission of Winchester Mystery House, LLC ©

So why is this considered one of the most haunted places in the United States? And what is it really like to wander around its halls?

Some of you may not know much about this Victorian mansion in San Jose; those of you who are like me and have terrible insomnia and stay up late flipping through haunted mansion specials or ghost chaser shows may have a better idea of why this house is so dreaded. Either way, let’s dive into the Winchester House’s strange story!

Who Was Sarah Winchester?

The Winchester Mystery House was once owned by Sarah Winchester (nee Pardee), a well-educated East Coast woman who married into the very wealthy Winchester family. Sarah, who was by all accounts an extremely kind, sensitive, and generous person, was plagued by terrible tragedies in her personal life.

After marrying William Wirt Winchester, the son of the founder of the Winchester rifle company, in 1862, she gave birth to a daughter in 1866. Her daughter Annie died just six weeks after birth, of an extremely rare disease. In 1881, William contracted tuberculosis and also died. Sarah was left alone and, understandably, devastated.

Everything relayed so far is 100% factual. The story continues, but it’s important to keep in mind that there is no definitive proof the next step in Sarah’s life happened as described, though it has been the agreed-upon sequence of events for decades.

The story says that, while looking for a reason that all this bad luck had befallen her family, Sarah went to noted psychic Adam Cooms to ask for his help. Cooms told her that the spirits of all those killed by Winchester rifles were now taking revenge on her family and that Sarah herself was cursed. However, she could avoid this curse by moving out west, buying a house, and remodeling/building it following the guidance of those spirits.

Following this advice, Sarah moved to San Jose with her inheritance and stock in the Winchester company and bought an eight-room farmhouse that would become the legendary Winchester Mystery House.

From the start, she employed carpenters and contractors to work on the house 24/7. Though the mansion holds 160 rooms today, it is estimated that over 600 rooms were built and torn down during construction.

In total, Winchester spent $5.5 million on the house’s construction, which ended only because of her death in 1922. Since she moved into the house in 1884, that means there were 38 years of constant construction – an actual Guinness record. 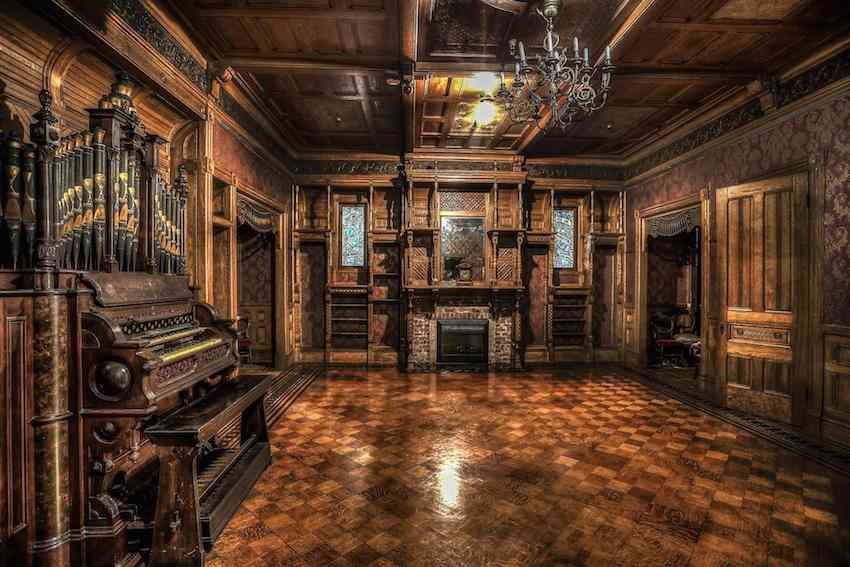 Grand Ballroom of the house – used with the permission of Winchester Mystery House, LLC ©

Sarah actually never had a master set of blueprints, but instead would reportedly hold seances to get instructions and begin the next cycle of construction. This process, combined with the need to keep construction going all day, every day, is what led to many of the odd details found around the house today. Apparently, the spirits of the undead are also terrible architects and engineers. 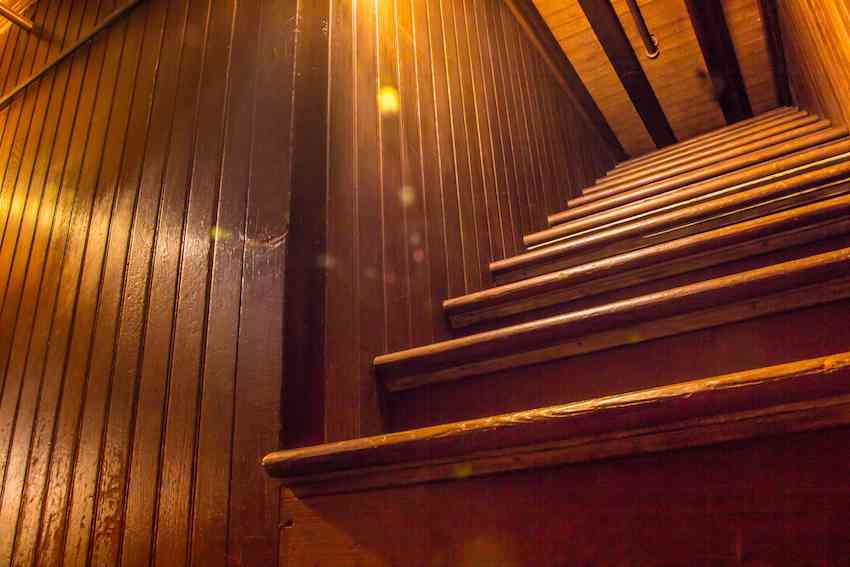 The stairs to nowhere – used with the permission of Winchester Mystery House, LLC ©

Here are some other mind-blowing statistics about the Winchester Mystery House’s contents and size: 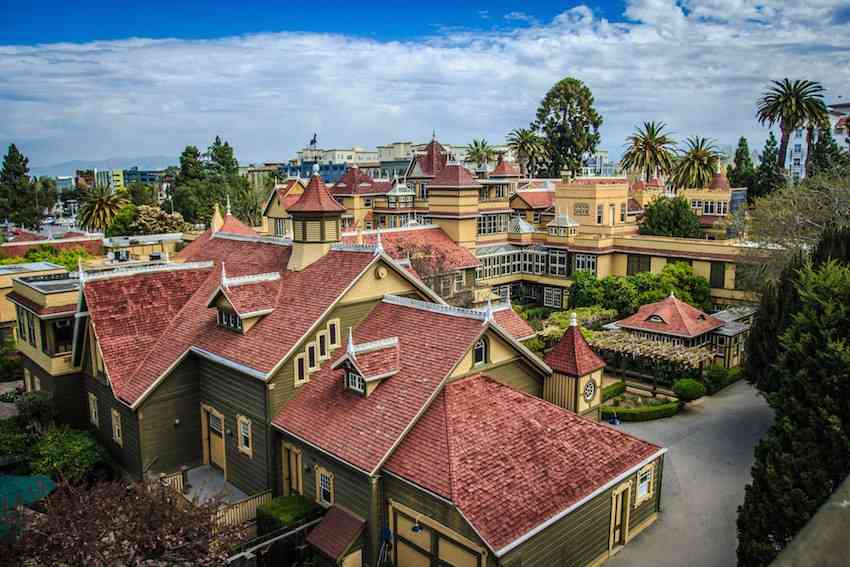 There’s sprawling, and SPRAWLING – used with the permission of Winchester Mystery House, LLC ©

Point being, it’s massive. I mean, TRULY never-ending. When you visit the Winchester Mystery House to take a tour, you get to see a lot of truly beautiful, historic rooms in the house, but you can only get to explore part of this maze-like mansion because of its immense size.

So Why Did Sarah Really Build the Winchester Mystery House?

The explanation that a psychic told Sarah to build this house in order to lift the curse from her family does actually hold water. After all, Sarah did hold several seances in the house, and many instances of the number 13 being used in patterns and interior design can be found throughout the building.

Many people say she was fascinated by the occult. The tour guides in Winchester Mystery House mention the fact that Sarah would change bedrooms every day to avoid the spirits she felt were chasing her. 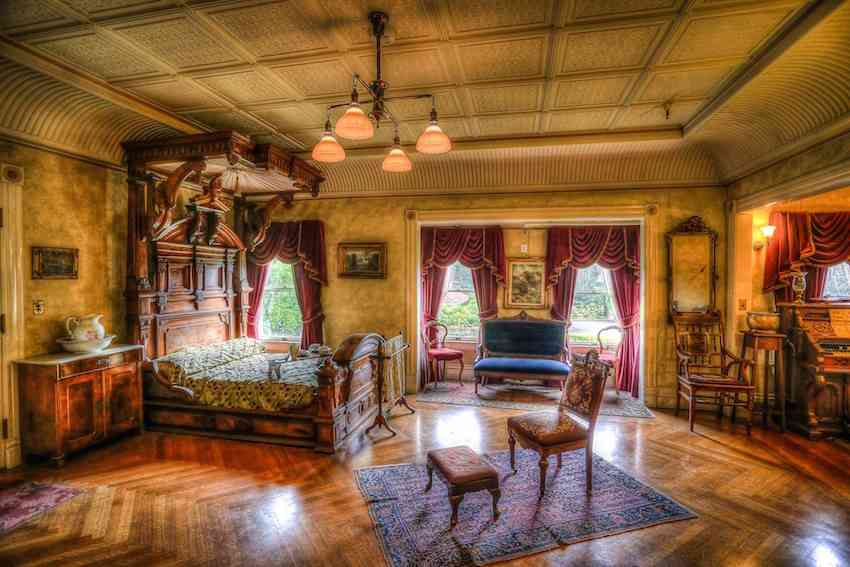 The explanation, however, could be even simpler. Sarah had clearly experienced serious tragedies in her life before moving out west; perhaps her need to have workers in the house 24/7 was more about having people and noise in the house at all times to distract her, rather than a belief that she was appeasing spirits.

Perhaps the goal of constantly remodeling her house kept her mind occupied and goal-oriented, so she wouldn’t have to think too much about her dead daughter and husband. 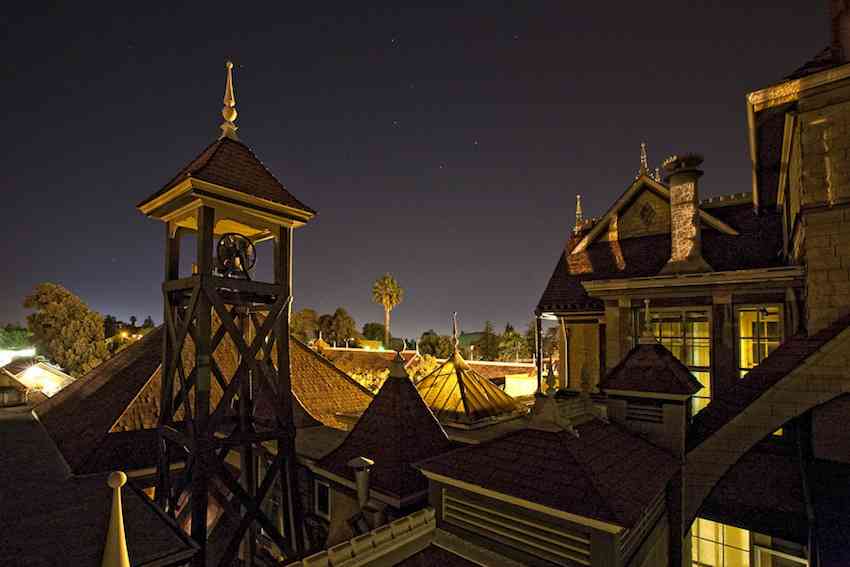 Or, perhaps the predictions of the psychic filled her with guilt about the number of people Winchester rifles had killed, and she felt she wanted to spend what she may have viewed as blood money gained from the Winchester fortune as soon as she got it.

After all, Sarah Winchester also generously donated to many charities and hospitals, both in California and back East. Her modest nature led to most of these charitable donations being kept anonymous right up until her death.

So, Is the Winchester Mystery House Haunted or Not? 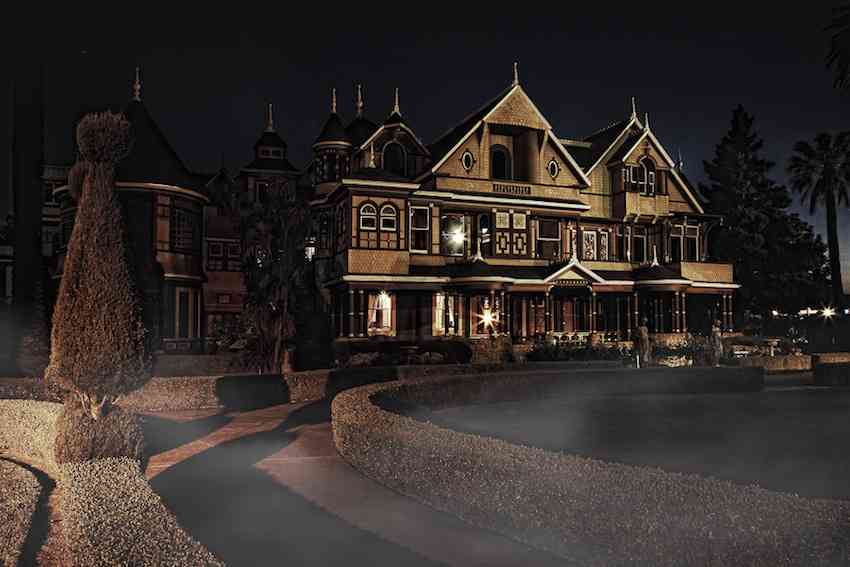 Now, for a disclaimer that probably comes much too late: I am a skeptic. I do not really believe in ghosts. I know that making that claim in a public forum is just asking for a poltergeist to invade my home and prove me wrong, but oh well, here we are.

I will say this: after the initial combination of Victorian elegance and architectural quirkiness you observe upon entering the Winchester Mystery House, there is a very palpable feeling of something dark and disturbing in the house, even when you don’t know the history.

Though I will add that knowing Sarah’s history – the generosity she showed towards those around her, the kind soul she was – makes the family deaths that stained her life all the more tragic. 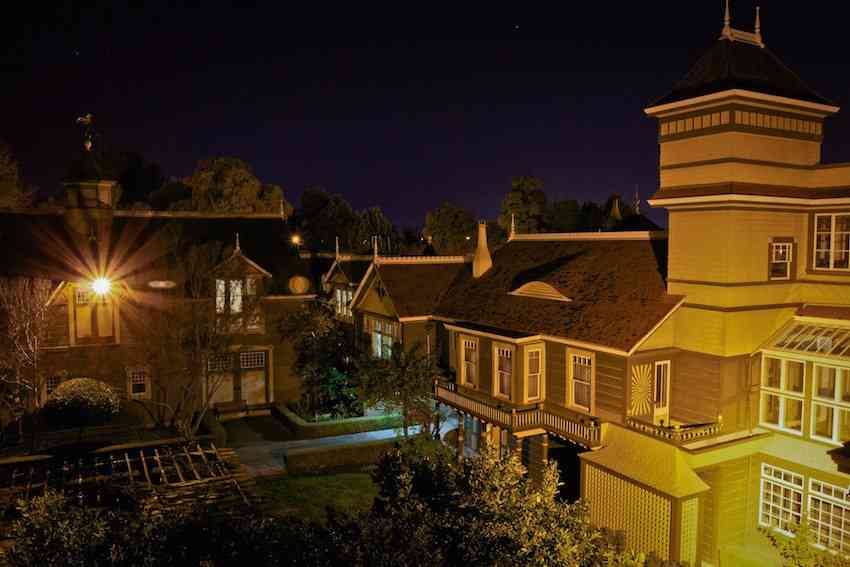 The central courtyard at night – used with the permission of Winchester Mystery House, LLC ©

The more you walk through the oddly shaped rooms, stairs to nowhere, and maze-like floors, the more you feel something eerie and strange surrounding you. And it’s not ghosts, in the literal sense. It’s the feeling that you are looking at the physical manifestation of someone facing a deeply haunting waking life. The illogical ups and down you have to navigate, hidden passages, doors that open up to walls – it all feels like the result of someone trying to escape and hide.

I cannot tell you if the Winchester Mystery House is the home of actual ghosts. But, I will tell you this: a house can be haunted without spirits, but rather by its history alone.

For me, the Winchester Mystery House is definitely that house. And it is fascinating.

Want to See For Yourself? 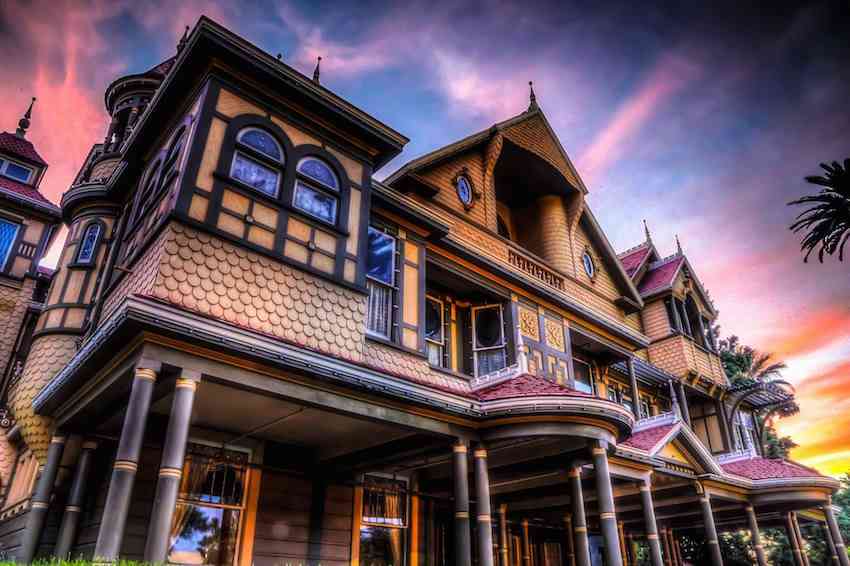 I highly recommend visiting the Winchester Mystery House if you are ever driving through central California. The tour runs from $20 to $49, depending on how much time you want to spend there and how extensive a tour you want to do.

My tour guide was very well-informed about the house and its history, and clearly enthusiastic about his job. The only downside is that there is no photography allowed inside the house.

Regardless of your feelings about the paranormal, the strange architecture and history of the Winchester Mystery House make it a good afternoon stop for pretty much everyone. 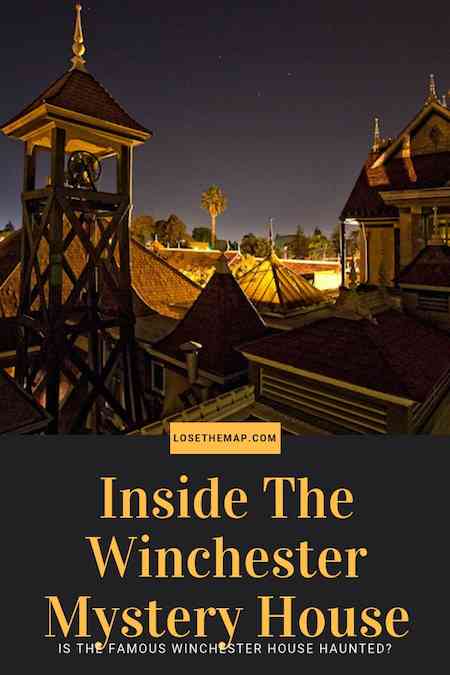