Carnival in Brazil is not just about the official parades and events.  It’s about the spirit of fun and insanity permeating every neighborhood in the country.  If you don’t get to experience a random neighborhood carnival bash in addition to scheduled and organized events, you are missing out. 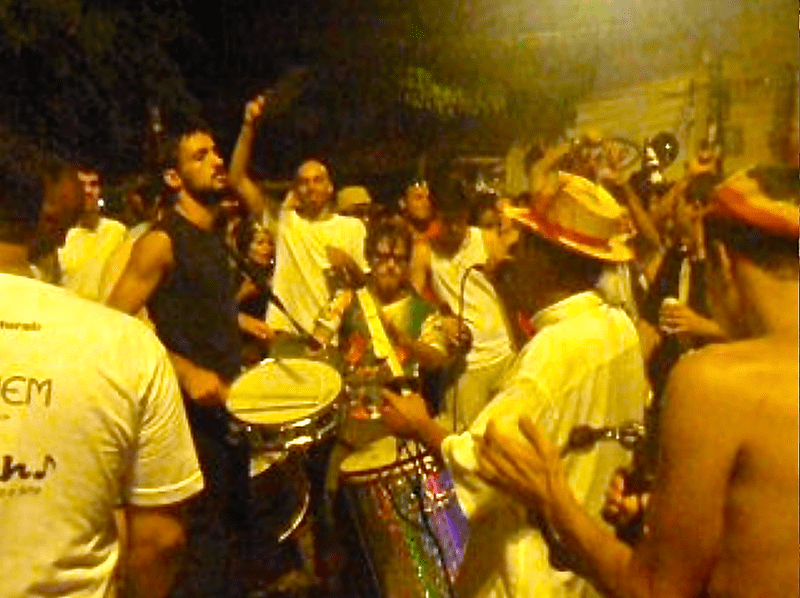 After the first day of celebrations in São Paulo, a lot of people actually leave the city for the full five days of Carnival, heading either to the beach or smaller towns.  As I understand from my host sister, that’s because the whole city of São Paulo can’t just shut down for Carnival, but a lot of smaller towns pretty much close up and have people spilling out and dancing in the streets for five days, so they are better places for those who want to fully celebrate the holiday.  But you can get an experience like that even while staying in major cities like São Paulo.

Saturday night, I was hanging out at a bar in my neighborhood with a few other people, and we were pretty much the only group in the establishment.  I was gazing out onto the empty streets wondering how on earth I would spend the next days of carnival, when a huge group of 200 loud and drunk people passed by us.  Obviously, we had to follow them and see where they were going.  We threw whatever reals we could find in our pockets on the table and ran out to join the group.

It turned out that one of the blocos (like schools of samba but much less formal) was having its loud and raucous after-party.  The giant congregation of people stopped at a grassy square about two blocks down from my apartment, and decided to set up camp there.  There was a circle of musicians playing, and a woman twirling around a fire baton who was drinking quite a lot of alcohol and then blowing out huge flames all over the place (maybe even distressingly close to my hair at times). 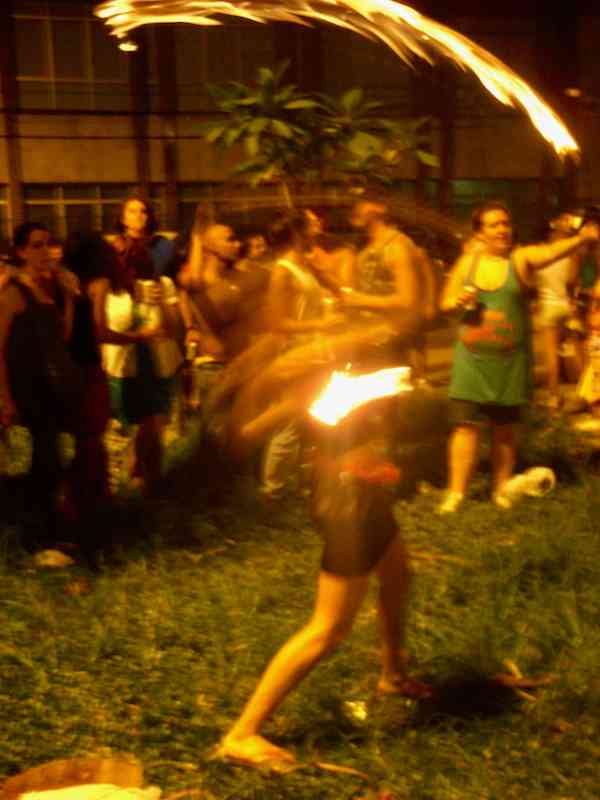 Men and women were selling chilled beers out of gigantic coolers so we could occasionally stop and cool down from the rapid dancing.  It was exactly what I imagined Carnival in Brazil should be; random people getting together, dancing, and having a great time on the street.  No park closure at 9 PM, permits required for every single thing, and banning of alcohol consumption on the streets (sorry USA, I love you, but sometimes you make it a little hard to just kick back and have a good time).

My one tip for people attending celebrations like this, or going out in Brazil in general, is to watch out for surprise make-out sessions.  Brazilians appear much freer than most about approaching strangers and kissing them; a local friend told me it would not be that unusual to make out with 5-6 people at a club in one night.  Of course, if a tan, dark-haired, shirtless Brazilian boy approaches you and insists on this particular custom, I’m sure no one will judge if you accept his offer.  You can always say you were just respecting the culture.

This party was probably my fondest memory from my experience with Brazilian Carnival.  It felt chaotic, spirited, and impulsive.  Everyone was warm and open to us joining their group, and that sense is the number one thing that always sticks out in my mind about my overall experience in Brazil.  I really don’t think I have ever seen a friendlier or more open country.  So here’s a summary/rundown of what you should do:

2) Enjoy the fire tricks at a safe distance

3) Learn how to spot and dodge unwanted kisses

Now here’s a short clip of ‘fire girl’ doing her thing. Thankfully, no one was burned during the filming of this clip.