Akihabara’s reputation as the central hub for electronics in Tokyo, coupled with it’s neon-lit, eye-straining appearance, led to the cool-sounding nickname “Electric Town”.

The neighborhood draws computer and tech geeks from all over Tokyo, fathers looking for new gadgets and computer accessories, lonely men looking for pretty girls to smile at them in maid cafes, and groups of teenagers who spend hours browing in arcades and manga stores.

But one thing at a time.

I got off the subway two stops over from the downtown Tokyo station, and immediately emerged into what looked like the birthplace of neon. Walking into Akihabara is like walking into an arcade game. Brought to you by SEGA. 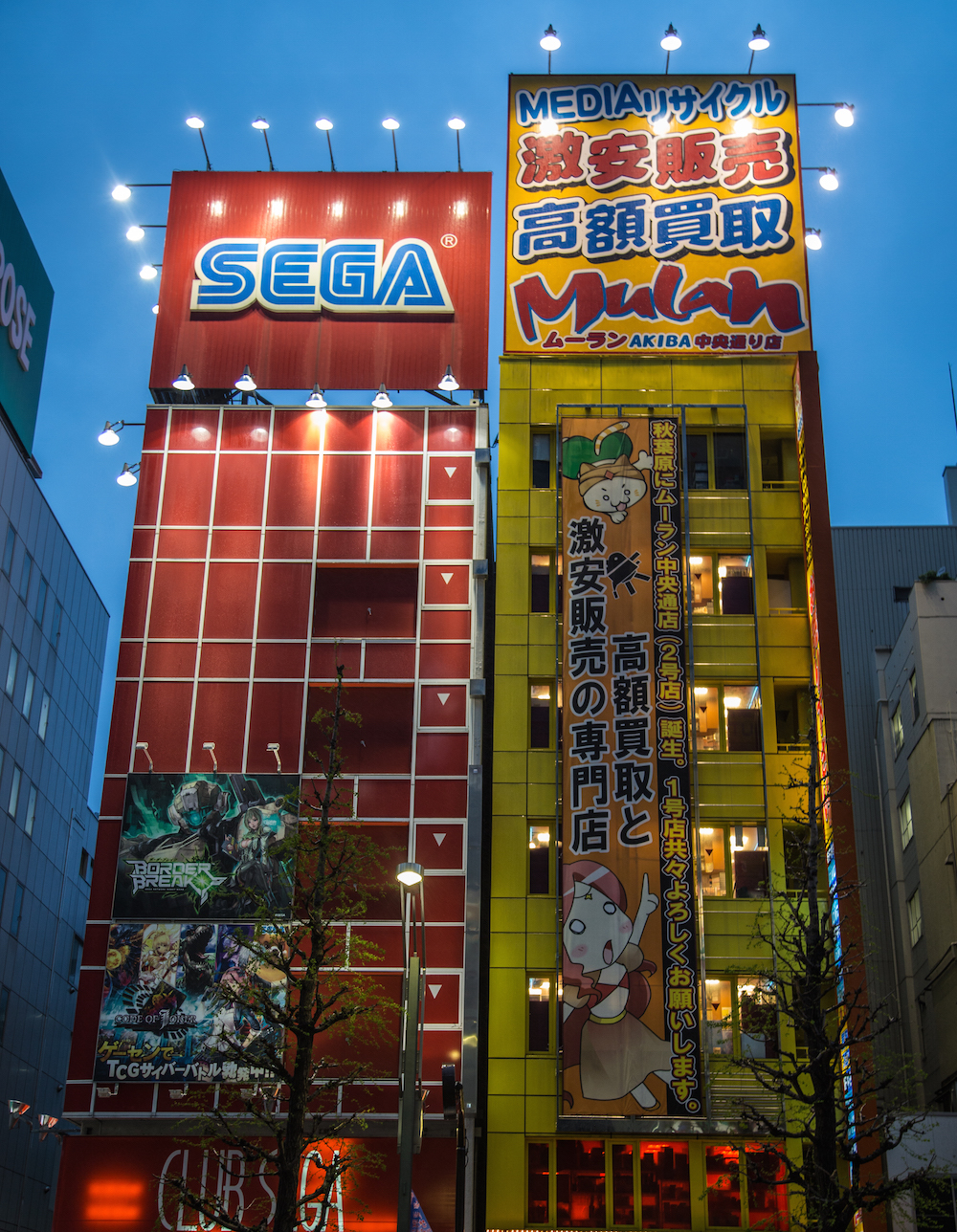 When my eyes adjusted to the wattage coming off the buildings, I saw anime and manga characters plastered on every available surface. Salesmen yelled in rapid-fire Japanese about their store’s deals (I think?), and high-pitched jingles poured out of every storefront.

Jingles are everywhere on and off the main drag of Chuo Dori. I don’t know why or what they are about, but I do know that in addition to now having the Sonic theme song stuck in my head, my ears were trying to sort through a jumble of cutesy rhythms plucked out on a Casio meshing together on repeat.

This overload of light and sound was really jarring in the beginning, but as I walked deeper into Akihabara and got used to the noise level, I really started to fall in love with the flashy, lively Electric Town.

The neighborhood really tries to create the feel of a video game, and on some level it succeeds insanely well. The jingles turned from annoying to delightful, the lights went from mildly painful to spectacular. Not to mention the rain coming down on the street and pooling on the pavement made for some really incredible reflections later at night.

I turned a corner and ran into a Japanese girl dressed like a French maid. Only in Japan could a girl wear that outfit and still manage to pull off the naive and cute look. You only wear skirts that short in LA if you want priority admission at the club.

Anyway, my new friend started trying to drag me in to the maid cafe on the second floor of the building behind her. It seemed like a better idea than walking through increasingly torrential rain, so I went up to see what this maid cafe business was all about.

Red and pink were splashed on everything in sight, and the second I sat down a waitress came over to put cat ears on my soaking wet head. Basically, picture the kind of place a Hello Kitty doll would frequent if it came to life. That is a maid cafe. 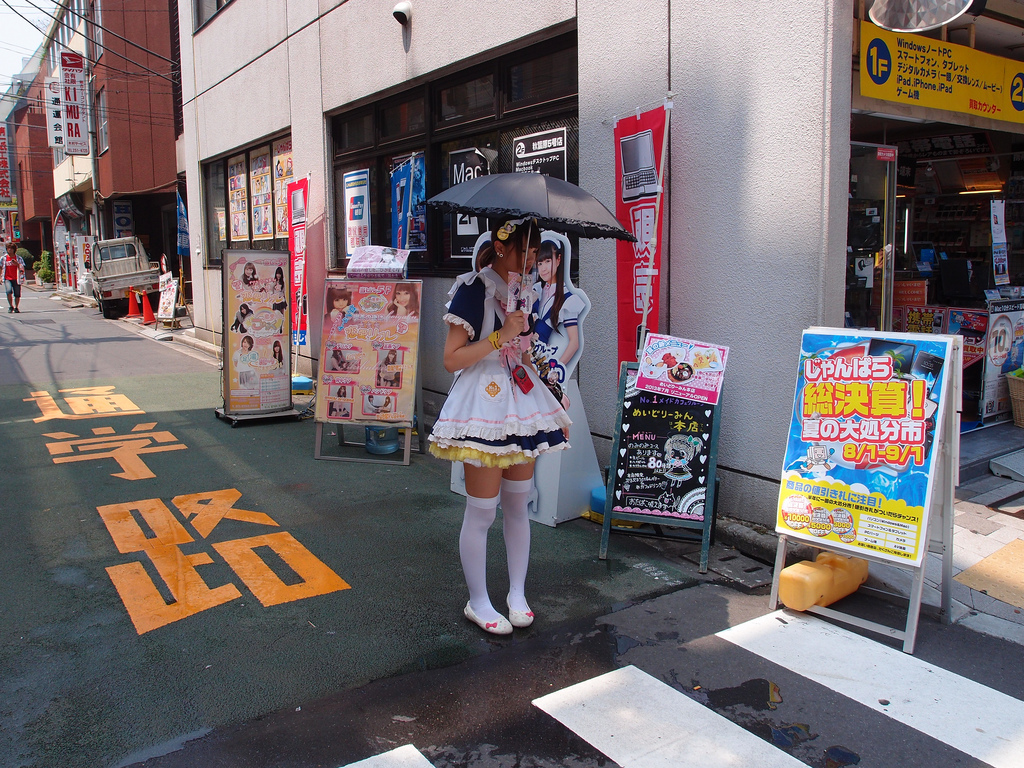 I ordered a (way) overpriced iced coffee and saw the rest of the store’s customers. Two tourist girls from France, two businessmen enjoying a beer, a couple of Japanese girls checking out the businessmen, and a tired-looking middle-aged man sitting alone. A lot of businessmen and otaku (fans of anime, manga, video games) come here to get the platonic but flattering attention of the young, innocent-looking waitresses.

The sweet girl that was serving me futilely tried to teach me a little song and routine that I gathered we were supposed to do together, but between my lack of Japanese skills, her lack of English skills, and my general failure as a person at doing “cutesy” things, I was hopelessly lost.

It was a fun experience overall, but perhaps not exactly my style.

Losing (Badly) at the Arcades 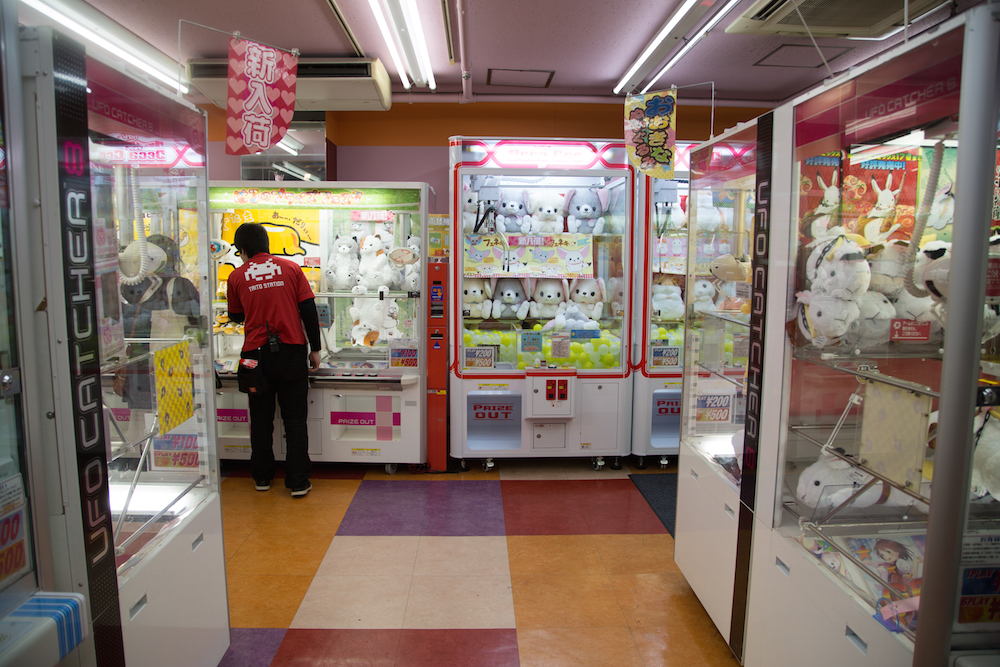 I went back down to the street and was greeted by the now waterfall-like rain, so I found an arcade and decided to check it out. For 100 yen (a little less than a dollar), I could use the mechanical claws to try to win an iPod speaker. For 300 yen, I could lose my patience, and for 500 yen I could regret the beer I just lost out on in order to fail at an arcade game.

After giving up, I noticed the machines in the arcade were a little odd, in that I couldn’t quite understand what customers they were meant to attract. Is there really a lot of overlap between the crowd that wants giant velvety rabbits.. 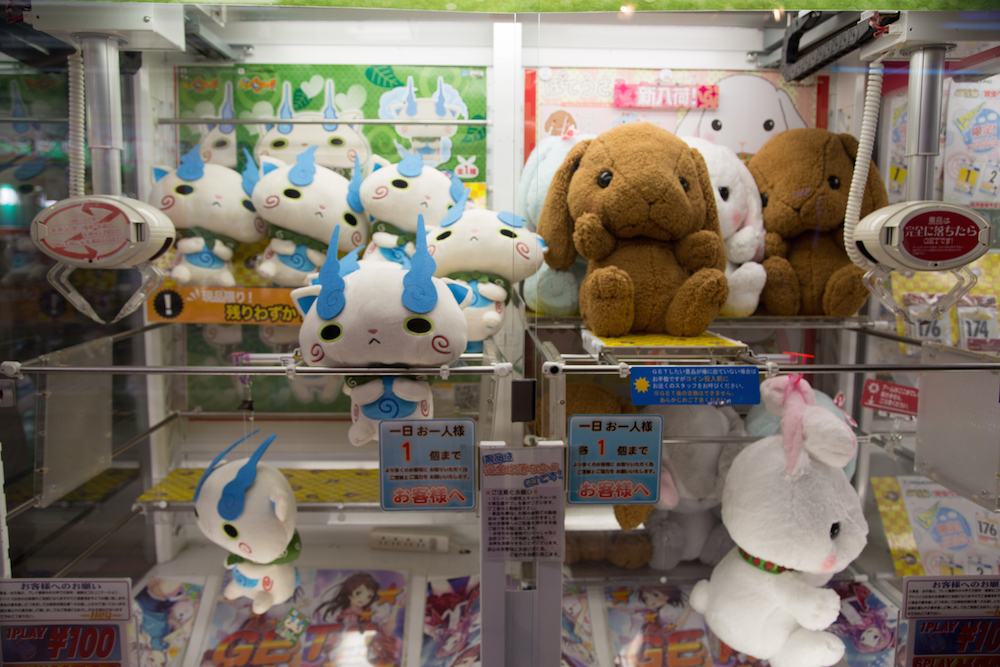 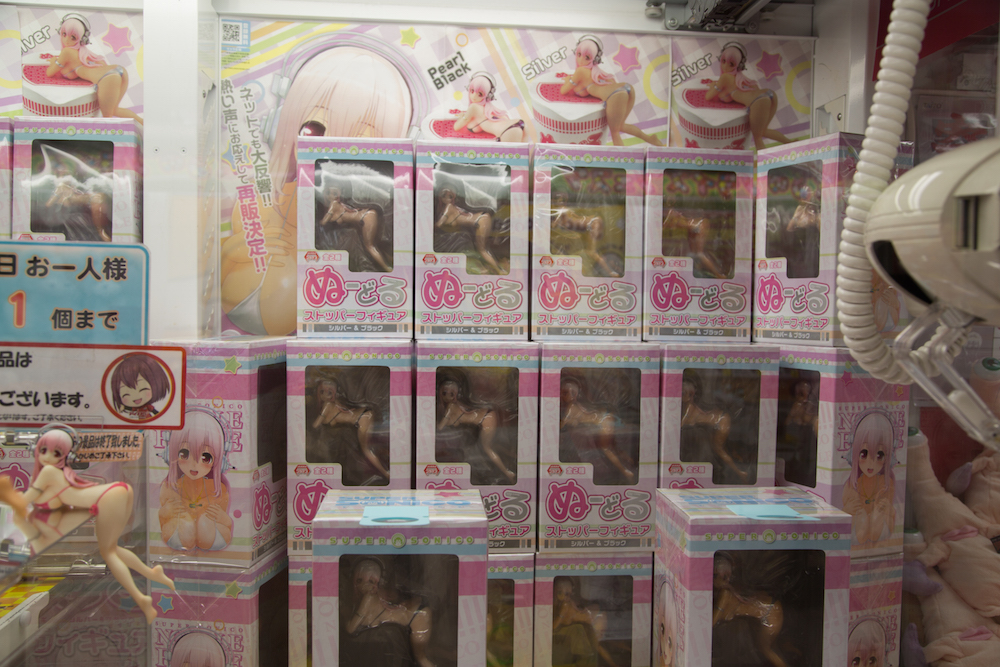 And yet I must have been the only person in that arcade to find it strange at all. This is one of the things I love most about the first few days in a new country; I start off thinking some things are weird, only to realize that I’m the only weird one after all.

I wanted to make one last stop before leaving Akihabara. Some of my friends are ferociously devoted to the manga series “One Piece”, and I wanted to pick up a few issues while exploring the inside of Akihabara’s famed giant manga and anime store, Mandarake.

The store itself was incredibly different from the streets outside. Bright lights and colorful chaos gave way to quiet storegoers browsing paper comics and gingerly placing them back on orderly grey shelves. It was small and cozy and wonderful.

Most importantly, it was the first time I got up the courage to use my Japanese. Anyone who’s tried to learn a language and then use it with native speakers knows the heart-stopping fear of sounding like an idiot, or accidentally saying something awful and offensive. And the clerk understood me! These are the small victories that make my day on the road.

I picked up three “One Piece” issues and investigated the other floors. Mandarake must be what anime fans dream about at night. Eight floors of comics, DVDs, and action figures overflowing on every shelf, the musty paper smell of old books wafting through the air. It was quiet and comforting, but it was also closing time, so I got ready to go home.

I left Akihabara and got the metro to my apartment in Shibuya, the jingles, noise, and mishmash of neon signs still floating around my head. It had all been quite intoxicating and just five minutes after leaving I almost missed it. I wanted to turn around and go back.

But Harajuku and the Meiji Shrine were waiting for me the next day. So read on tomorrow to discover the truth about Harajuku girls (hint: they are nothing like those in Gwen Stefani’s video)!