The Day I Realized My Travel Comes With Privileges

The Girl on the Train

“I need your passport”, the blonde train conductor commanded as the train hurtled through the Belgian countryside, halfway from Bruges to Brussels. She was looking down at the young woman with big brown eyes next to me, who was sporting immaculate make-up, nails, and a hijab. The conductor had previously insisted on addressing her twice in the Flemish Dutch dialect of the area, which the confused woman next to me (just like most of us on the train), quite clearly did not understand.

In response to the passport request, the woman’s face fell. “I…don’t have it with me”, she softly replied. 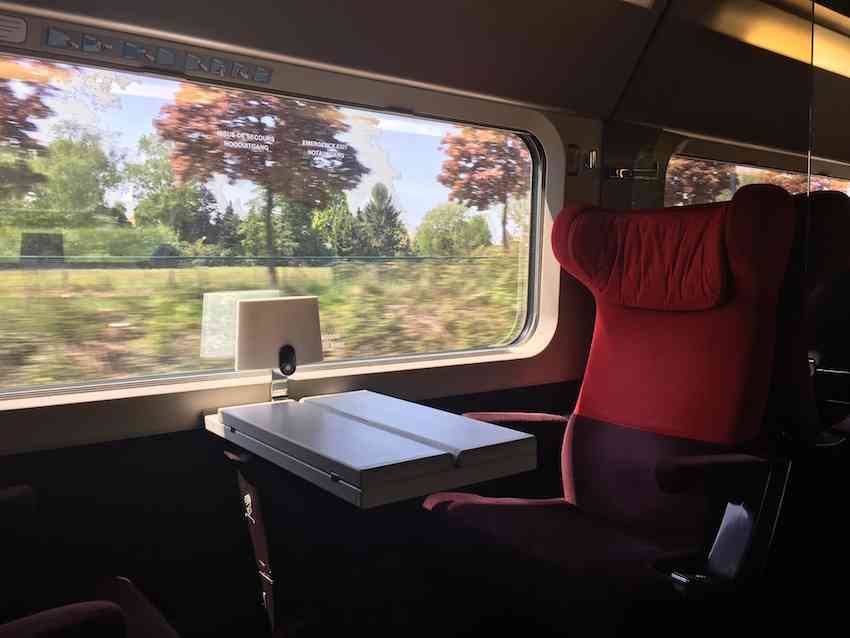 Train travel through Europe. Taken in the Netherlands.

The conductor seemed like someone who had been dealing with the public too long to actually still like people. She had previously stared me down disgustedly for daring to have a note from the train station attendant in lieu of a ticket – the ticket printing machine had stopped working after I purchased my ticket, and the nice man attending it gave me a stamped and signed form instead to let me board the train – but after a sigh of frustration she waved an OK in my general direction.

The girl next to me, Amirah*, was having no such luck. “You don’t have your passport? You’re traveling in a foreign country”, the conductor lectured.

*The names have been changed for the womens’ privacy.

“We just went to Bruges for the day,” Amirah said, motioning to her two fellow female travelers on the opposite side of the aisle, “we were not told we would need a passport when we bought the tickets.” 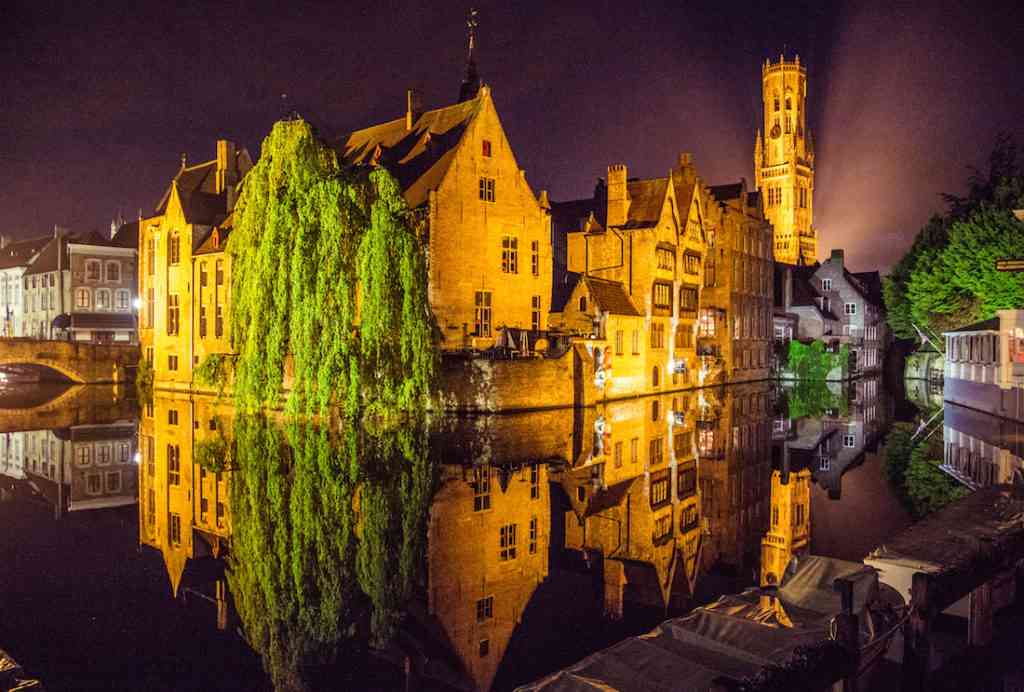 We were returning from beautiful, picturesque Bruges.

The train manager insisted that she needed to see ID because Amirah was traveling on an under-25 ticket, and she had to confirm her age. Amirah and her companions apologized and said they did not realize she needed to show a passport on the train after purchase.

“What if something happens to you? No one will know who you are.” There was no concern in the conductor’s voice, just annoyance and contempt. I understood both Amirah’s and the conductor’s positions here, but the conductor could be a little less aggressive about the whole thing. The next part of her lecture, however, brought things to a whole new level.

“YOU have to carry ID. Especially these days” she said pointedly. “You’re a foreigner. The police can just board the train and ask you for ID, you know. If you don’t have it, you’re in trouble”.

The conductor then asked Amirah to pay the difference for the over-25 ticket. It was $25 more. Her companions protested that their full-price tickets cost only $5 more than the youth ticket, but having already attracted the rest of the train’s attention and not wanting to cause too much trouble, Amirah handed over a 50-Euro bill and got the change.

A Conversation With Amirah

A few silent moments passed until the conductor had moved on to the next compartment. Amirah and her companions started speaking to each other over me in hushed voices, talking about how stupid it was that she ended up paying so much.

Feeling the situation was somewhat unfair as well, I chimed in to tell her that I was sorry that happened, and it was in fact, quite stupid.

“Right?!” she said, and a smile of relief flashed on her face. We started talking, and she told me she was in town from Muscat, Oman. Forgetting about the rude conductor, we moved on to the subject of travel and our recent explorations around Belgium. 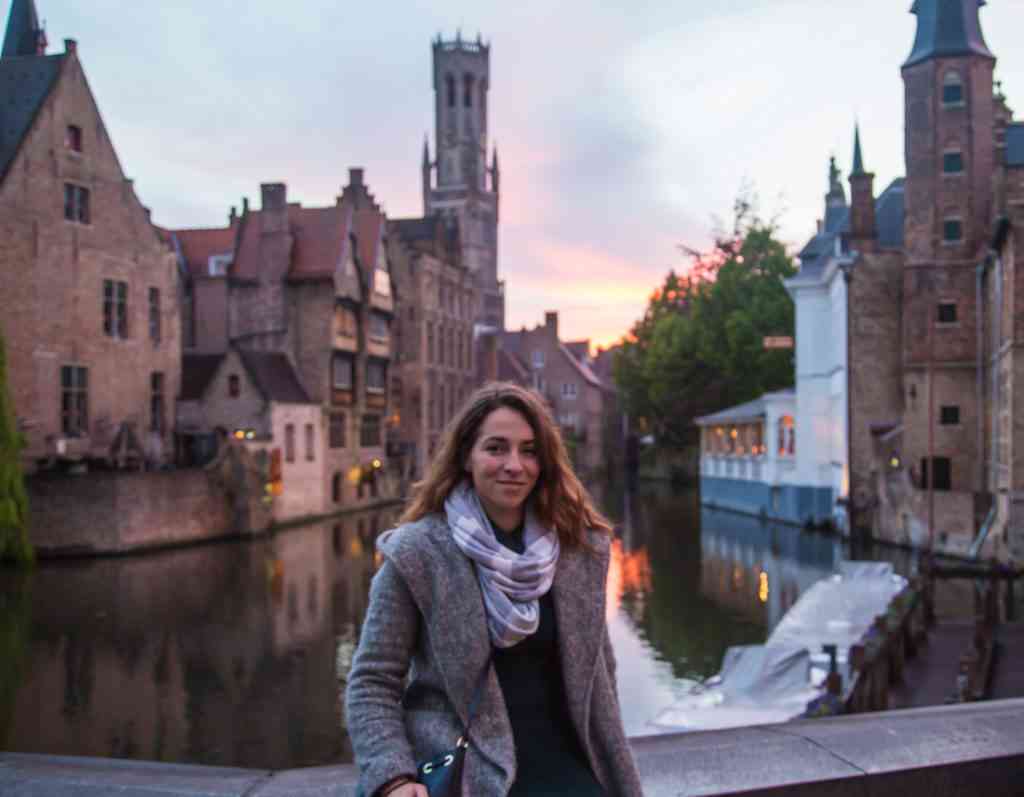 Exploring the beautiful streets of Bruges

“How do you like it here?”, I asked. For days, I had been raving to friends about how surprisingly amazing Belgium was, and how the people in Brussels were so much friendlier than I had ever imagined. I couldn’t wait to share my excitement over this beautiful country with my new acquaintance.

-“Well, it’s pretty. But…how do I say this…” she said shyly, then hesitated.

-“Are the-“, she dropped her voice lower to a whisper, “are the people up here always so rude?”

-“Oh the conductor you mean? I mean generally no, I don’t think so, she’s probably the exception.”

-“Really?!” My surprise was evident.

-“Oh, I mean not everyone of course. But…a lot. I guess…”, she paused, looked down and hesitated for a while before continuing, “I just don’t know if they’re rude in general or if they don’t like us because we’re Arabs”.

Something inside me cringed uncomfortably. Here I was, espousing the friendliness of Brussels’ inhabitants and the amazing experiences I had in that city to anyone who would listen, and this woman had instead experienced rude shopkeepers, aggressive conductors, and who knows what else.

“I mean, it’s much better than Frankfurt”, she continued. “We had a layover there from Oman and….phewwww”, she said, as she threw her hand backwards in disbelief and laughed.

We continued talking about this and that, and she offered suggestions for what I should do if I ever visit Oman. She and her friends had a quick enthusiastic exchange in Arabic, and then she turned to me and said, with a big smile, “you know, we’re actually recruiting for Oman Air, would you be interested?!”

“No, I’m good with my job, but thank you so much”, I said (turning down a paying job that would have me traveling all the time, because I’m a complete idiot).

“OK, well if you ever change your mind…”, she replied in a sweet sing-song. 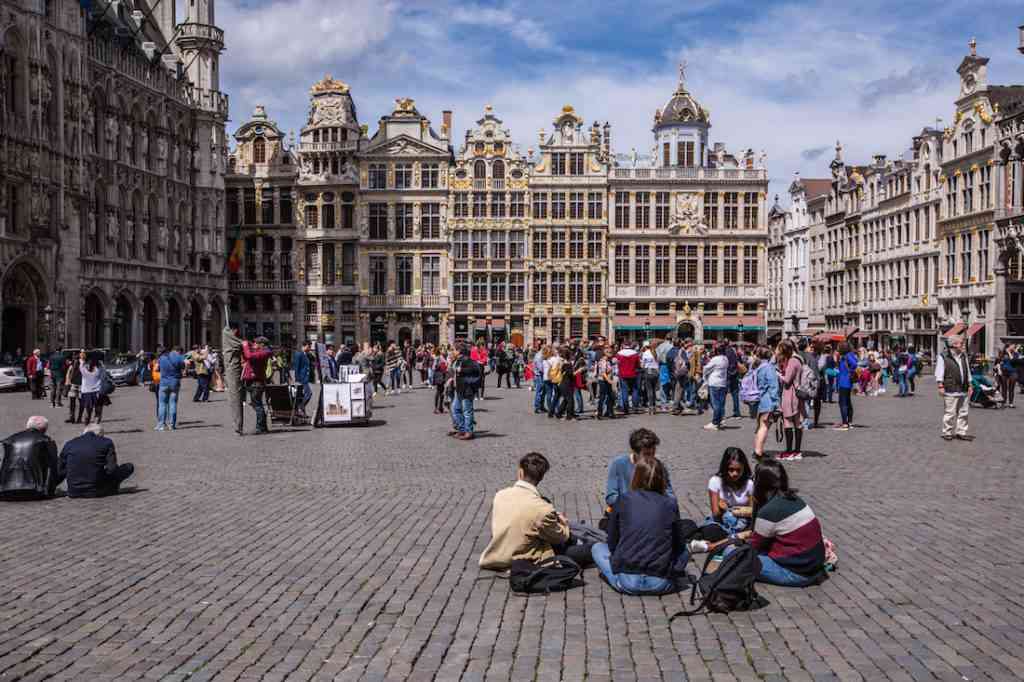 This whole exchange, while seemingly minor, brought to the forefront this nagging thought that’s been creeping up on me for ages.

I spend so much time telling people how friendly the world truly is, how amazing it is to travel all over the place and feel the warmth of locals everywhere, how travel can truly be a great and uplifting experience – yet there is a part of me that knows some people will experience the positives of travel and local hospitality much more frequently than others.

Don’t get me wrong; I do truly believe (and it’s confirmed every day on the road) that the world and its people are better than most think, and many people are surprisingly open to helping others out and talking with travelers and strangers.

So here it goes.

All of this frequently makes my travel experiences different from so many other groups of people. It gives me privileges when I travel that others simply don’t have.

For some of you who scoffed at the use of the word “privileges” (which has become very politicized lately), I use that word in a very simple, common sense way. This is what I mean when I say I travel with privileges:

I don’t have to worry about people disliking me, making fun of me, or even resorting to violence against me because of my sexual orientation or identity. Being straight and cis is not something that makes me a target. It’s not something I have to think of or perhaps even try to hide in some areas.

I don’t have to worry about being white. In most places in the world, even if my skin color may be an oddity, it won’t make people hate me (with few exceptions) or disdain me. It might categorize me as “rich” in some places when I travel, so maybe I’ll be a target for petty theft. But I have all too frequently heard jokes, even in majority non-white countries I’ve spent time in like South Africa, that most perpetrators of more serious crimes know better than to “mess with the white girl”. Messing with the white American girl means the law might actually pursue the offenders, or at least, is way more likely to pursue the offenders than if they had messed with the black local girl. 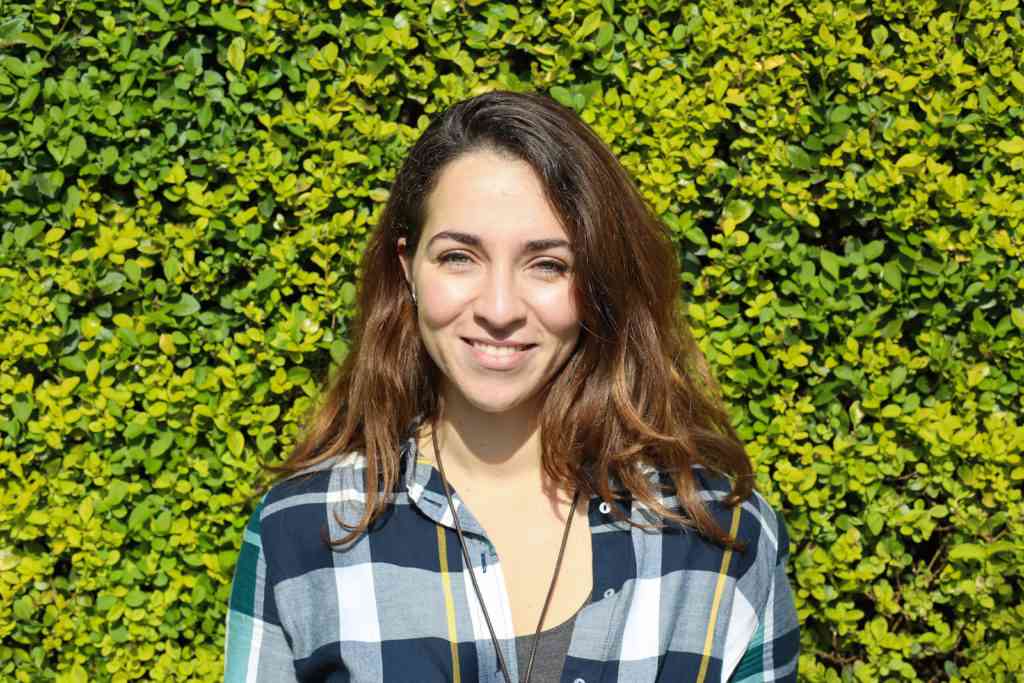 Super white after months in London

I don’t have to worry about coming across as American; though I may get a few judgmental questions about American politics, for the most part I’ll get treated like a well-off tourist and catered to as such by those I come across. People visiting from other countries, mostly developing countries, don’t always get this same assumption about them and treatment directed towards them. I have seen travelers from poorer countries, regardless of their own level of personal wealth, sometimes getting less stellar treatment from staff than North Americans or Western Europeans.

I generally don’t have to worry about finding someone to help me. Being a young and attractive girl plays a role in my interactions with people. I find many people are willing to help me out. Some of them (most of them, I’d like to believe) might have helped me out regardless. Some of them might not have cared so much to help me out or befriend me if I were an overweight middle-aged woman, an unattractive man, or anything other than what I am. I may have to deal with some unwanted attention later, but that, while annoying, can usually be handled.

On the other hand, this means I will also never know what it is like to travel as a man. I won’t know what it’s like to have that extra shade of recklessness and freedom my male traveling buddies seem to have. I won’t know what it’s like to socialize without worrying so much about my interactions with the opposite gender. In some places, I won’t have the freedom to enter some social spaces that – either through social norms or actual laws – are not open to me. Not to mention will generally have to worry more about my alcohol intake and where I walk and who I flirt with.

I can’t write or speak to experiences of other groups on the road, because I have not had them. I can only describe my own experiences in any given country.

So did the train conductor, shopkeepers, and other people Amirah found rude dislike her because of her skin color? Or did she just happen to bump into rude people?

It could most likely be a little of both.

The point is that in my travels, unlike Amirah’s, that’s something I never have to wonder. 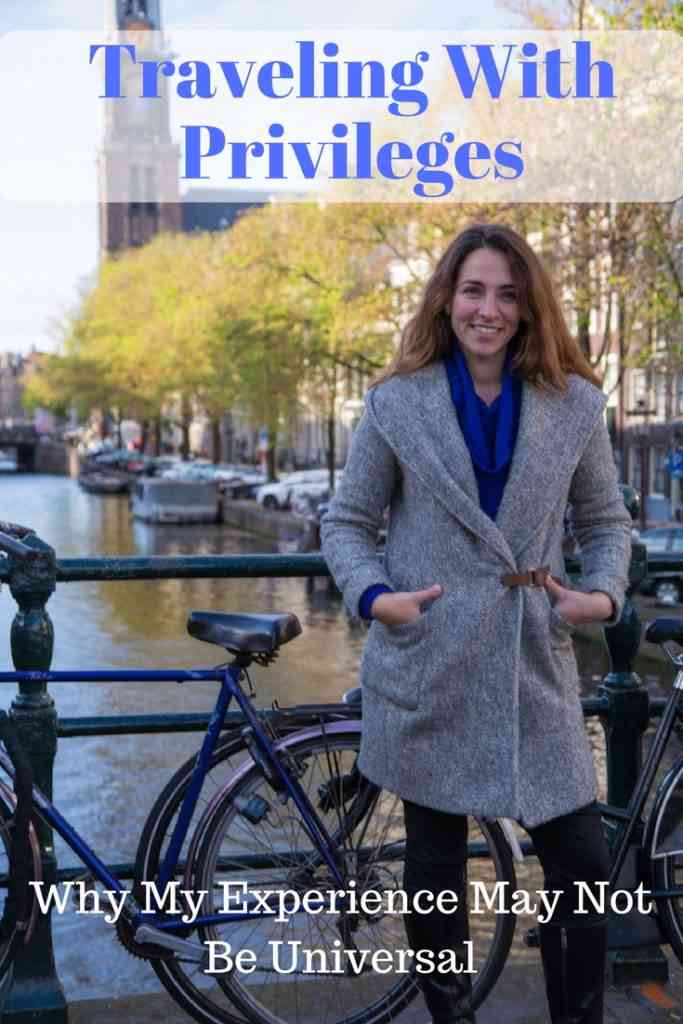 So what can we do about this difference of experience when we travel? I don’t know. We can be conscious of it and do our best to keep moving forward, building bridges, and traveling the world no matter what we look like or are like, so things get better in the future.

If you do want to check out some blogs in addition to mine (but don’t leave me! keep reading my posts as well!) that deal with travel as seen through different eyes, check out the following sites:

Here are 2 kickass female travelers who often comment on traveling as black women:

These bloggers deal with traveling while holding passports from non-Western countries (some of us don’t know how good we have it with visa-free travel to so many places):

Of course this is just a starting point of bloggers I like and follow, but there are many more great travelers out there showing you the world through their eyes, so start searching!

What do you think of this post? If you know of any other blogs like this, put them in the comments below!